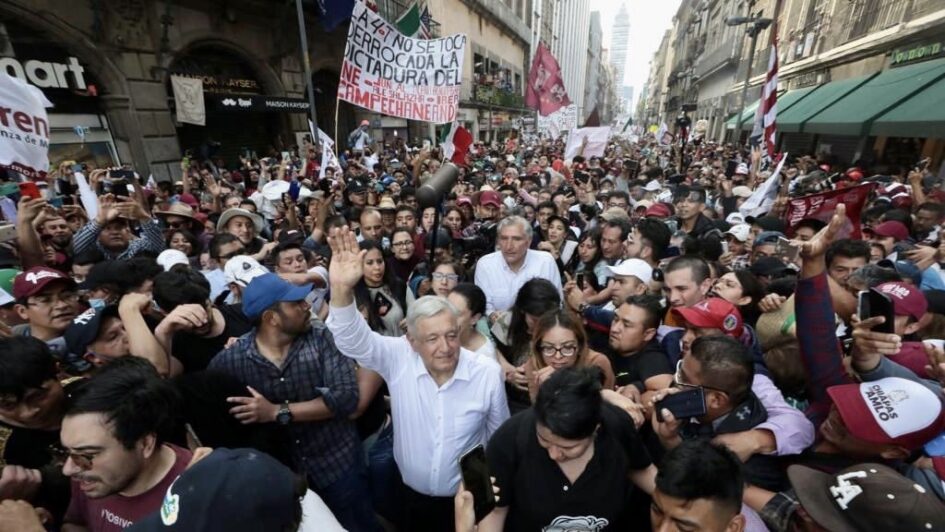 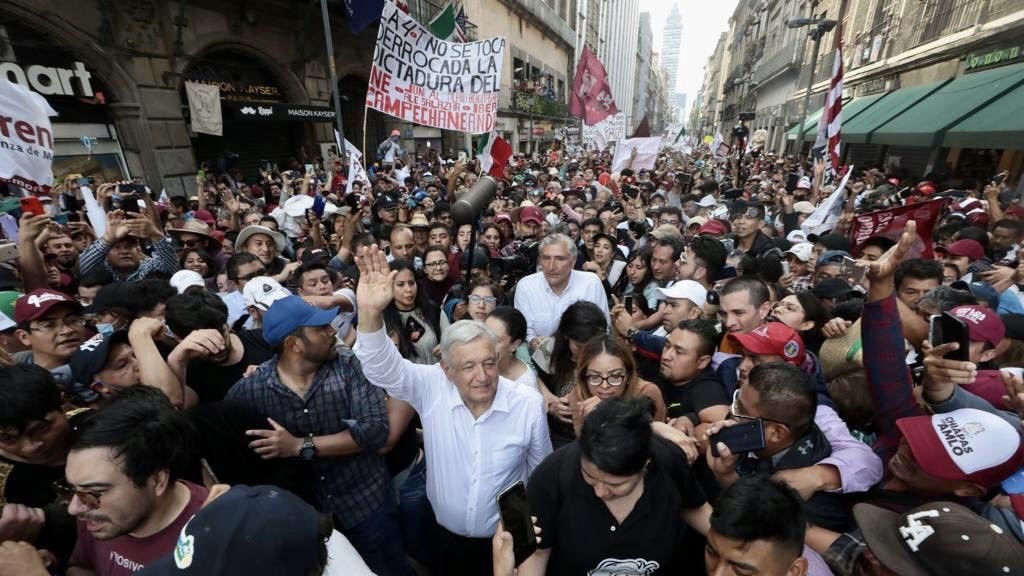 Above Photo: Mexican President Andrés Manuel López Obrador walks among thousands of supporters to mark the four years of the 4T. MORENA

Thousands gathered in Mexico City on Sunday to participate in the march called by President AMLO to commemorate his four years in office.

Mexico City, Mexico – On Sunday, November 27, hundreds of thousands of Mexicans flooded the streets of the capital Mexico City in support of President Andrés Manuel López Obrador (AMLO) and his pro-people policies. People of all ages and from all walks of life arrived in the capital from different states of the country to participate in the march called by President AMLO to commemorate his four years in office.

Supporters began gathering in the Paseo de la Reforma avenue early in the morning. At around 9 am (local time), they began marching from the Angel of Independence monument to the Zócalo, waving flags and enthusiastically singing the president’s name in chorus: “Obrador, Obrador, Obrador…”

Soon, they were joined by the governors, deputies, and senators of the ruling center-left National Regeneration Movement (MORENA) party as well as family members of the president. President AMLO also joined the sea of people who were eagerly waiting for him.

Alina Duarte, an independent Mexican journalist, reported that over a million people mobilized on Sunday. She described the mobilization as “historic.”

“It was the largest mobilization in recent decades, exceeding the million march in Santiago de Chile in October 2019 or Lula’s recent victory in Brazil,” she said.

“Nobody gave us the 4T. And it may or may not be the horizon to build for many on the left, but it is clearly the broadest unifying social force in Mexico today and it will be far from over in 2024,” stressed Duarte.

After walking for nearly six hours alongside a multitude of people, President AMLO addressed the citizens gathered at the Zócalo. He shared the social and economic achievements made by his government in the past four years.

The president emphasized that “of the 35 million families in the country, 30 million (85%) directly receive at least a small portion of the public budget; and the remaining 15% also benefit from development conditions, paying less taxes, lower electricity and fuel rates, without suffering from corruption, influence, and with business, work, justice, and peace options.”

President AMLO pointed out that the minimum daily wage went from 88 pesos (USD 4.6) per hour in 2018 to 172 pesos (USD 9). He also reported that there has been a significant increase in the number of workers registered in the Mexican Institute of Social Security (IMSS), 21,722,777 workers, with an average annual salary of 14,712 pesos (USD 770).

The president said that despite the pandemic, in four years, 1,264,931 new jobs were created and 145 public universities providing free higher education were opened.

He reported that 283,535 single mothers received financial help for their children to attend childcare centers while they work. In this regard, he added that a total of 3,732,000 families with children enrolled in primary education were also supported. These scholarships also benefited 4,155,000 high school students and 410,000 university students from poor families. He also reported that 2,339,000 young people received professional training with the Youth Building the Future program.

He added that the reserves of the Bank of Mexico increased by 14%, the Stock Market Index grew by 24%, and 1,890 billion pesos (USD 9.9 billion) were collected in taxes in the last four years from banks and large companies that had previously not paid taxes.

López Obrador said that his government’s economic model is based on justice and social welfare as well as the equitable distribution of income and wealth, and described it as Mexican Humanism. He vowed to continue making history, promoting the change of mentality and the revolution of consciences and make Mexican Humanism a reality.

The attendees applauded the head of state for several minutes and waved MORENA flags and banners in support of AMLO and MORENA’s re-election in 2024.

Parallel mobilizations in support of AMLO were also held in the US cities of Los Angeles, New York, Atlanta, Chicago, and Houston.

Hundreds of thousands of revolutionary workers took to the…