Hunger and fear for people who were deported to Zimbabwe 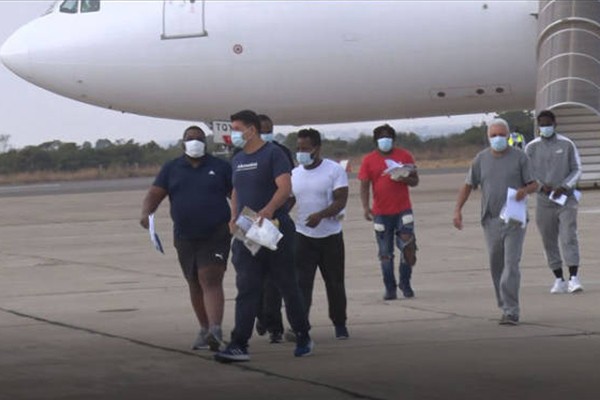 Men deported to Zimbabwe by the Home Office last month are being forced to live on the streets and are in fear of arrest. Yet home secretary Priti Patel wants more mass deportations.

Two deportees who are now homeless in the Zimbabwean cities of Harare and Bulawayo have been left to beg for food. The two were part of a group of 14 who were deported on 21 July.

The flight was due to deport up to 50 people, but legal challenges and Covid-19 isolations meant most were saved from removal.

A second flight departed on Wednesday evening with seven people on board. Legal challenges had meant some people were taken off the flight.

Charity Detention Action launched a legal challenge over poor phone signals in two of the removal centres. It says this has prevented people from having contact with their legal representatives.

In recent weeks the Home Office had been rounding up people born in Zimbabwe into detention centres, including people who came to Britain as children.

The flight last month was the first to have left for Zimbabwe for years. But immigration lawyers believe the Tories agreed a deal with Zimbabwe’s government to remove people who served prison sentences of more than 12 months.

The TUC union federation has described this as a “cruel double punishment” placing people at risk of “persecution, isolation and poverty”. It has called on the government to halt planned deportation flights until it has “fully addressed the miscarriages of justice that have taken place within the immigration system”.

One deportee, Munyaradzi Ndowa, moved to Britain in 2007. He had returned to Bulawayo where he grew up, but no longer has any family in the country so was sleeping on the streets.

“I’ve been struggling. It’s really terrible. I have nowhere to live. I have to ask for food from strangers,” he told The Independent website.

He was deported because of a burglary offence.

Another deportee, a 43-year-old man, was removed due to a 13 month prison sentence in 2012. Since completing his ten-day quarantine, he’s been sleeping on the floor of a shed in Harare.

The father of five, whose children all live in Britain, said, “I had no money, no identification card, nothing. Just a pair of shoes and the clothes I was wearing. My living situation is impossible.”

The man had requested asylum in Britain in 2012 because he had been attacked by the Zimbabwean army due to his political beliefs. His claim was refused.

“I’m afraid. I’m having to go to meetings with the state’s Central Intelligence Organisation. They’re trying to find out why I was claiming asylum,” he added.

The Home Office claims it is funding “re-integration support” for those deported to Zimbabwe. But the men said that no support had been received.

Tendai Goremano was also deported last month, despite having lived in Britain since he was eight. He said he “would probably be dead by now” if a friend had not been able to help him as all his family is in Britain.

He was sentenced to three and a half years in prison in 2012 after getting into a fight in a nightclub. He has not been involved in crime since.

“I committed a crime when I was young. I’ve gone to prison, done the time for the crime, learnt from my mistakes, but I’m still paying for it. I’m not allowed to progress my life,” he said.

Patel claims that all deportees have a “history of serious and persistent offending in the UK” and are “dangerous criminals”.

But these are lies to justify a racist crackdown on immigration. Anti-racists must resist all planned deportations.