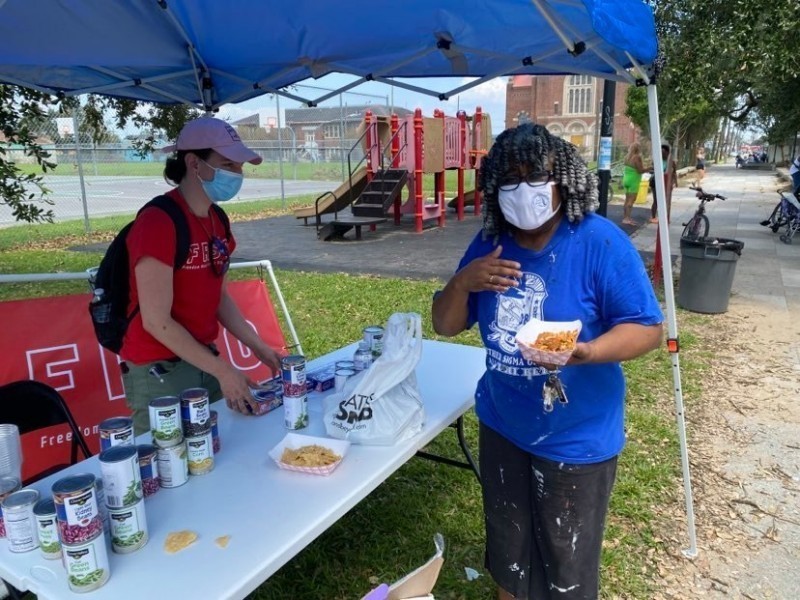 New Orleans, LA – As the recovery from Hurricane Ida drags on, residents of southeast Louisiana rush their relief efforts. But government aid lags. Entergy, the state’s power monopoly, has not answered questions about mismanagement.

Organizations scramble to deliver food, gas, repair equipment and other needed aid. Feroz Khan, a volunteer with the New Orleans Mutual Aid Society (NOMAS), told Fight Back!, “People are freely giving supplies, food, money and time to shuttle supplies in from nearby areas. Remote volunteers have been incredibly helpful because we urgently need eyes on spreadsheets and social media to match the resources on the ground to residents who need them and crews who can transport them.”

The Houma nation, the Atakapa-Ishak Nation, the Pointe-au-Chien tribe, several bands of the Biloxi-Chitimacha-Choctaw and other coastline indigenous communities mobilize their own relief. Many fear that outside aid won’t reach them.

The New Orleans Freedom Road Socialist Organization (FRSO) distributes supplies to the Treme and St. Roch areas, some of the oldest Black neighborhoods in the United States. Organizers set up a “People’s Power Charging Station,” a relief tent for community members to get supplies and recharge their devices. FRSO members also assist the state’s mutual aid networks.

But residents still face life-threatening conditions. Toni Mar, a hospitality worker whose roof broke during the storm, said, “My partner and I had to bail gallons and gallons of water.” Their landlord’s repair workers “were being pulled in so many different directions doing hard labor all day in over 100-degree heat.”

Cantrell, Biden: Where are your priorities?

Meanwhile, government responses have been slow, inefficient and uncoordinated.

Many are feeling hopeless and frustrated from applying for federal assistance. FEMA is dropping calls and letting online applications crash. The agency’s on-the-ground workers are doing their best, but they’ve suffered constant cuts over the years in the name of “balancing the budget.”

Aid administrators send money soonest to those with the most property. Compared to wealthy homeowners, low-income disaster survivors have half the chance of getting half the help. FEMA confirmed this with its own statistics in 2019. Black neighborhoods are least likely to get aid. This is because FEMA pays out the most for people with the most expensive damages. This doesn’t always cover people living paycheck-to-paycheck. People without formal housing contracts will get nothing.

For Orleans Parish, the hurricane intensified too fast for a mandatory evacuation. But in the aftermath, the city took four days to provide any evacuation assistance. Many could not afford to go and now suffer life-threatening heat and food scarcity.

While not setting up an evacuation, Mayor Latoya Cantrell kept busy cracking down on “looting.” Looting is not a widespread problem, except for the hotel and gas companies stealing from survivors’ wallets by hiking prices. Yet, the New Orleans Police Department arrested dozens for petty theft. Cantrell held two press conferences on this while relief barely started.

On their end, evacuees hear mixed signals. FEMA is supposed to prioritize aid for uninhabitable housing. But while FE<A tells people to go assess their homes, the city says to stay out of town.

Parishes outside the levee system have the least access to help. Many residents of St. John the Baptist, a majority-Black industrial parish, have yet to see any relief.

Quest Riggs of Freedom Road Socialist Organization summed things up: “The government response has been weak, to say the least.”

Entergy: You said you had us covered!

Linemen and other electrical workers have put brave and invaluable labor into getting southeast Louisiana back on its feet. But Entergy’s managers need accountability for their deceit and negligence.

New Orleans city councilmember Helena Moreno found a discrepancy between what Entergy said they could do and what they did. Back in 2018, they testified that the New Orleans Power Station could start by itself after a crisis. But last week, it only rebooted by connecting to Slidell’s neighboring grid. This delayed energy restoration in the middle of a heat advisory.

Entergy is known for its ineffectiveness and outright lying. New Orleans suffers from about 2000 sustained power outages per year. In 2019, the company hired actors to pretend to support their latest plant at a town hall meeting. As of now, the company has not confirmed or denied if customers would see higher bills due to line damage.

The New Orleans Mutual Aid Society volunteer Khan gave us his perspective: “Instead of seeing revolutionary demands to take control of the grid and bring clean and storm-resilient electricity to all people as a human right, we are seeing leaders desperately trying to keep track of whatever timeline one corrupt energy company is giving them.”

We must fight for the relief we need

It’s clear that Louisianans are helping Louisianans make it through. Many feel-good stories about on-the-ground recovery work are making the news. This is a great thing, and it proves the resiliency of a region that battled disasters for centuries. But it doesn’t let the government off the hook. Storm survivors need fast and substantial aid, a comprehensive city response plan, and real democratic oversight of utilities. Climate change will only intensify hurricanes, so we need these now.

If you’d like to help local recovery efforts, some of their links are below: