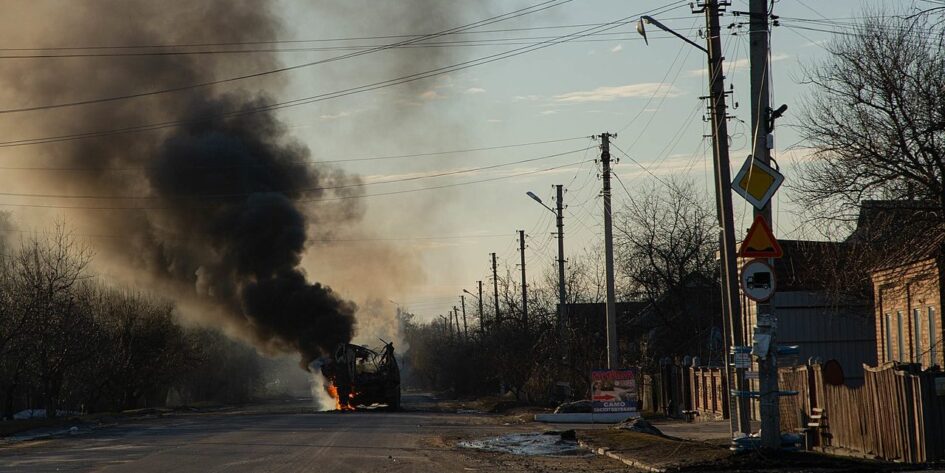 Ignatieff was leader of the federal Liberal party from 2009 to 2011. He led his party to its worst performance ever in the 2011 election. Before and after his foray into politics he has led a more successful career as a writer and public intellectual.

In the early 2000s, Ignatieff made a name for himself by urging the United States to become an “empire lite.” In a 2006 New York Times article, he argued the U.S. should encourage free markets, human rights and democracy by using “the most awesome military power the world has ever known.”

Ignatieff was living in the U.S. when it invaded Iraq (for the second time). He lent his full-throated support to that exercise of “awesome military power.”

Now Ignatieff has turned his attention to the Russian invasion of Ukraine. He has adopted a hard line that goes beyond what any Western leader has to date expressed.

In an opinion piece for the Globe and Mail, Ignatieff scoffs at the idea of soft power – exemplified by such non-lethal methods as sanctions. He urges Canada to follow Germany’s lead by boosting spending on the means to make war.

He’s not the only one to make that suggestion.

What is truly scary about Ignatieff’s take on Russian President Vladimir Putin’s invasion of Ukraine is what he has to say about the use of nuclear weapons.

In his Globe and Mail piece, Ignatieff works his way into the nuclear option prudently enough. He starts by underscoring the fear that Putin himself might be tempted to use Russia’s considerable stockpile of nuclear weapons:

“Mr. Putin has already threatened to use nuclear weapons, and if  […] he faces defeat and loss of power, we cannot exclude the possibility that he would use a tactical nuclear strike to hold on through sheer terror.”

But Ignatieff then crosses a line when he addresses the possibility of Putin invading a NATO-member country such as Poland or Latvia (where Canada has troops stationed).

If Putin were foolhardy enough to undertake such an invasion, Article Five of the NATO Treaty would oblige all alliance members to come to their fellow member’s aid. And Ignatieff suggests NATO’s response should not be limited to conventional, non-nuclear weapons.

He argues that the alliance must be willing to quickly escalate such a conflict to nuclear territory:

“The Russians need to understand that if they stage a military incursion across the NATO border […] they will be met by force, and if that fails to hold them, they will be met with nuclear weapons, at first tactical, and then as necessary, strategic too.”

Ignatieff is, in essence, proposing NATO should, if push came to shove, strike first with the catastrophic and deadly force of nuclear bombs and missiles.

What Ignatieff calls a “tactical” nuclear strike would be small compared to the massive destructive capacity nuclear powers have. But small is a relative term here. Such a strike would be as “small” as the bomb the U.S. dropped on Hiroshima, Japan in 1945.

The “strategic” use of nuclear weapons, which Ignatieff is willing to contemplate, would almost certainly become an all-out nuclear war. That would entail the destruction of much of the life on the planet. Such a war would mean many millions of incinerated human beings.

Ignatieff is justifiably aggrieved by the horrors Putin is visiting on Ukraine. But to say those horrors, if they spread to another country, would justify the global holocaust of unrestrained nuclear war is shockingly irresponsible.

If Putin were to invade a NATO member, the other NATO countries would collectively have the wherewithal to successfully defend their ally with conventional tanks, aircraft, naval vessels and guns.

Using nuclear weapons would not bring victory. It would bring global catastrophe.

Doomsday Clock is at 100 seconds to midnight

Ignatieff is still a lonely voice in openly advocating for a NATO use of first-strike nuclear capacity. But in private, others are no doubt considering that idea. By bringing it out into the open Ignatieff is getting us all used to the idea.

Older generations who lived through the tense days of the Cold War still have a vestigial fear of nuclear war. But the young have never had to confront that horror.

Notwithstanding age, we have all grown complacent about the dire threat of nuclear warfare. But we can no longer remain complacent.

The Second World War ended with the atomic bombings of the Japanese cities of Hiroshima and Nagasaki. In the aftermath, a group of scientists who had worked on the bomb founded the Bulletin of the Atomic Scientists.

The scientists’ mission was to educate and warn humanity about the immeasurable dangers the nuclear powers unlocked by science posed.

The Bulletin seeks to equip “the public, policymakers, and scientists with the information needed to reduce man-made threats to our existence.”

The group’s signature product is its Doomsday Clock, which shows how close humanity stands to full-scale nuclear war at any given moment. Currently, the clock sits perilously close, at 100 seconds to midnight.

Ignatieff’s analysis of Putin’s invasion places it in the Cold War context. He compares the war with Ukraine to the Soviet invasions of Hungary in 1956 and Czechoslovakia in 1968.

In both cases the Soviets overturned reformist governments. These were governments which sought to put a more human face on socialism and open their countries to trade and cultural exchanges with the entire world, including the capitalist West.

The Soviet Union of that era would not tolerate deviation from its version of Marxist-Leninist orthodoxy.

Ignatieff says Putin, who was born and bred in the Soviet system, is following in that tradition by invading Ukraine.

But Putin is more likely emulating the U.S. in its many efforts at regime change over the past three-quarters of a century.

When the U.S. overthrew the governments of Mossadegh in Iran (in 1953), Arbenz in Guatemala (in 1954), Allende in Chile (in 1973), and Bosch in the Dominican Republic (in 1963) it was not concerned with high ideals of freedom and democracy. U.S. forces helped install dictatorships in place of democratically elected governments in all cases.

The U.S.’s main motives for interfering in the affairs of peaceable countries were strategic and economic. It did not want its power and hegemony diminished in any way. It also wanted to protect the interests of Western oil companies and such corporate giants as United Fruit.

Similarly, Putin sees Ukraine as his backyard. He is not particularly concerned with Ukraine’s political system, be it democratic or otherwise. But he insists – just as the U.S. did for the Dominican Republic or Chile – that Ukraine must remain within the economic and military orbit of Russia.

Putin’s invasion is not an expression of any kind of coherent ideology. It is an exercise in pure power and national self-interest.

Racism has reared its ugly head in the midst of the refugee crisis engendered by the Russian invasion.

Officials are often refusing to allow racialized residents of Ukraine – many of them foreign students – to leave. Some who are aiding the refugee resettlement effort are also denying help to Ukrainian Roma.

As well, much Western news coverage talks about the supposed anomaly of “civilized,” middle-class European people enduring the horrors of war. It is something that, many journalists and commentators suggest, would be normal in a non-Western country.

Finally, in Canada there is much interest in the fact that the International Criminal Court has decided to investigate the Russians for possible war crimes.

Canada and 122 other countries are signatories of the 1998 Rome Statute that brought the Court into existence. But before anyone gets their hopes too high, they should remember that neither Russia nor Ukraine have joined in that effort.

Nor have such giant countries as Indonesia, India, Pakistan, China, and, most important, the U.S.

Editor’s note: A previous headline stating the Doomsday Clock moved forward was inaccurate. As stated correctly in the story the Doomsday Clock remains at 100 seconds to midnight, the same time it has been since 2020. The headline has since been changed.

U.S.-Russia talks may be the last chance

“Every option is on the table”: U.S. prepping for Libya-style intervention in Ethiopia

‘Every option is on the table’: US prepping for Libya-style intervention in Ethiopia

The Crisis in Ukraine is a Planetary Crisis Provoked by the U.S. that Threatens Nuclear War