Amazon, which bought Whole Foods in 2017, is the second-largest employer in the U.S. and has made record profits during the pandemic, with global net revenue in 2020 of $386 billion.

Across the country, the movement to back Amazon workers in their righteous, growing fights for safety and union rights continues to pick up steam. Solidarity actions took place Jan. 12, the birthday of hated Amazon boss Jeff Bezos, and on Jan. 15, the birthday of Dr. Martin Luther King Jr., who fought racism and organized for worker justice. 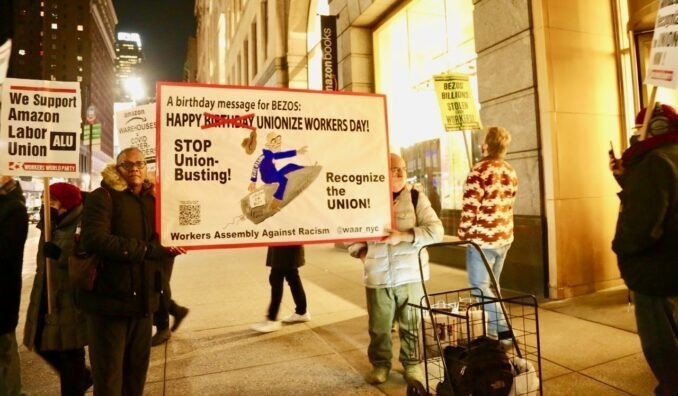 ‘Crappy birthday to you’

In New York City Jan. 12, protesters delivered Bezos — richest man in the world and union-buster-in-chief — a five-foot-long un-birthday card at Amazon’s city headquarters. On Manhattan’s 34th Street — during the year’s coldest week and as COVID-19 cases filled local hospitals — a crowd blocked the entrance to Amazon’s bookstore to demand the company recognize the unions being organized around the country by its workers.

The gathering was led by members of Workers Assembly Against Racism, Amazon workers, leaders from the successful Columbia student workers strike, activists with the Laundry Workers Center, Workers World Party and others. That morning, New Yorkers woke up to WBAI radio host King Downing singing “Crappy Birthday to You,” as he interviewed Amazon Labor Union leader Chris Smalls. 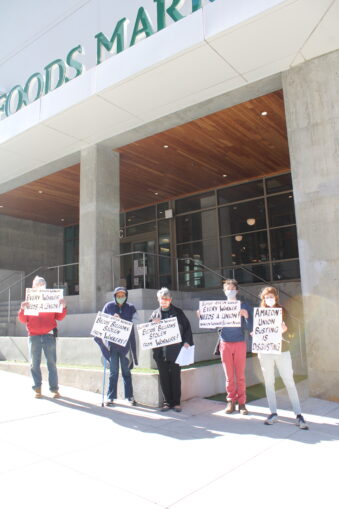 As supporters of the Atlanta Amazon Workers Solidarity Network approached the Midtown Whole Foods, they were met by the store manager and a security guard. Within their rights to distribute leaflets on the public sidewalk and hold signs supporting the right of workers to organize a union, they engaged customers and passersby.

Drivers at the busy intersection took the leaflet with the headline, “Amazon, Stop Union Busting.” While stopped at a light, one man gave a donation to the campaign. 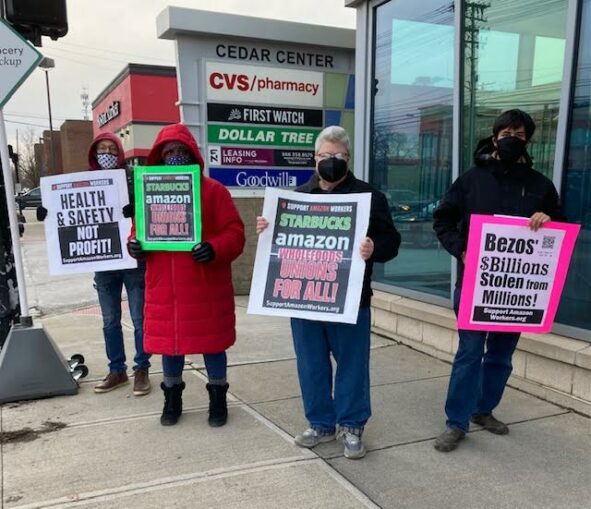 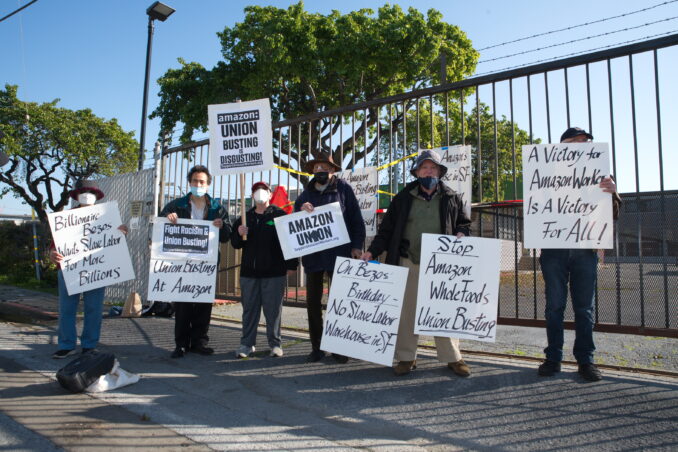 In San Francisco, Bezos’ birthday was “celebrated” with a loud and angry protest outside a proposed new massive Amazon warehouse located in the South of Market neighborhood. Amazon recently purchased an entire square block in this city, in an area zoned for low-cost housing, to build a large warehouse. This building will not only threaten union organizing but has the potential to wipe out small retailers in the area.

Organized by the United Front Committee for a Labor Party, the protest demanded, “End slave labor and union busting by Bezos.”

CBTU-Boston President Jamie Wallace warmed people up with Stevie Wonder’s “Happy Birthday” refrain and by speaking about Dr. King’s leadership in the union struggles of his day. The crowd cheered for King’s 93rd birthday and chanted, “Jeff Bezos, We Say No! Union Busting’s Got To Go!” 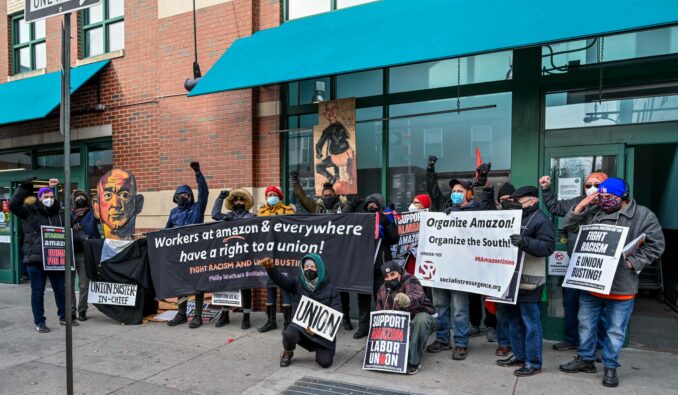 Bitter cold weather did not stop activists from coming out in Philadelphia, gathering outside the Whole Foods Market at 10th and South streets.

Speakers represented Workers World Party, Black Alliance for Peace and Philadelphia Food Not Bombs Solidarity. A Jeff Bezos puppet, a sign depicting a defecating Bezos and the main banner were courtesy of Spiral Q. More than one worker stopped to talk about their experiences working at Amazon or Whole Foods. 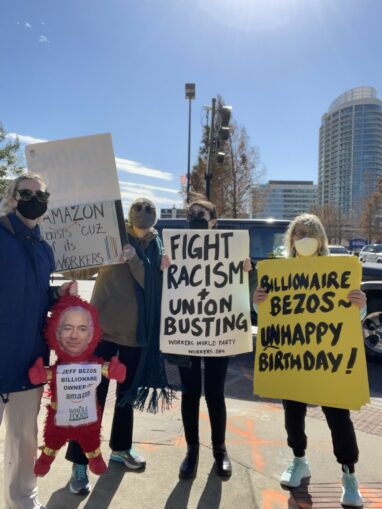 Drawing widespread support from ongoing motorists, Houston activists carried signs blasting centibillionaire Bezos outside a Whole Foods Market. Despite the unusually cold temperatures and 40 mph winds, which kept some supporters away, the messages were dramatically well-received. One person got out of their car and told protesters how much he appreciated the demonstration.

Houston cops, in marked and unmarked cars, came to protect Whole Foods from the truth: Union busting is disgusting! In this so-called “right-to-work” state, working-class people realize how much better their lives and their jobs would be if they had a union contract. A Jeff Bezos piñata was the star of the day! 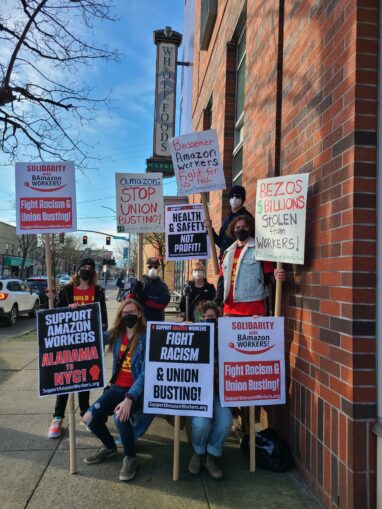 Portland Amazon workers, Whole Foods workers and community supporters rallied in front of a Whole Foods store. They were greeted by raised fists from a heavy stream of traffic along the crowded four-lane highway.

Speakers described how Whole Foods and Amazon workers are regularly forced to violate social-distancing policies to complete their work and have to supply their own personal protective equipment — with COVID-19 testing no longer being made available. These essential workers say they have little-to-no control over their work schedules and are being forced to compensate for continual understaffing.

Demonstrations took place in other cities, including Harrisonburg, Virginia.

On Jan. 11 the NLRB announced dates for a new union representation election at Amazon’s Bessemer, Alabama, warehouse — allowing the majority-Black workforce a do-over of the election in 2021, when a lopsided majority of ballots went against representation by the Retail, Wholesale and Department Store Union. The ballots will be mailed to workers beginning Feb. 4, to be returned to the NLRB before March 28, when the counting will begin. The second election was ordered by the Board after hearing weeks of worker testimony documenting widespread illegal union busting by Amazon.

However, the NLRB ruling fell short of what the RWDSU thought was necessary to prevent a repeat of last year’s setback. Amazon will still be allowed to have a mailbox on company premises, maintaining an atmosphere of surveillance and intimidation.

“We are deeply concerned that the decision fails to adequately prevent Amazon from continuing its objectionable behavior in a new election,” the RWDSU said in a Jan. 11 statement. “We proposed to the NLRB a number of remedies that could have made the process fairer to workers, which were not taken up in the Notice of Election issued today.” (rwdsu.info)

The remedy should have been simply to award immediate union recognition and compel the Amazon bosses to negotiate, as the boss-controlled election process allows companies time and legal cover to conduct union busting. Unions will have to develop strategies that go outside the NLRB, if Amazon and all unorganized workers are going to have a voice on the job.

New York City: We support staff & schools who are organizing #SickOut2SaveLives actions at their…

In honor of the 201st birthday anniversary of Frederick Engels,…

In honor of the 80th anniversary of the Red Army’s…