After a year-long battle, India’s farmers have at last defeated the right-wing Modi government and its capitalist masters, forcing a repeal of their three reactionary farm laws. This is a big victory for the farmers that has been achieved through a courageous struggle, which has been tenaciously maintained since September 2020.

There have been ebbs and flows in this struggle, but the farmers never gave in (read our previous coverage: [1] [2] [3] [4] [5] [6]). A great sense of jubilation is spreading among the farmers’ groups and the thousands worldwide who supported their struggle against the Modi government.

These laws were related to a massive corporatisation drive by the Modi government, aimed at ending minimum support prices for farmers, which are set by the state to ensure farmers receive a livable price for their crops. 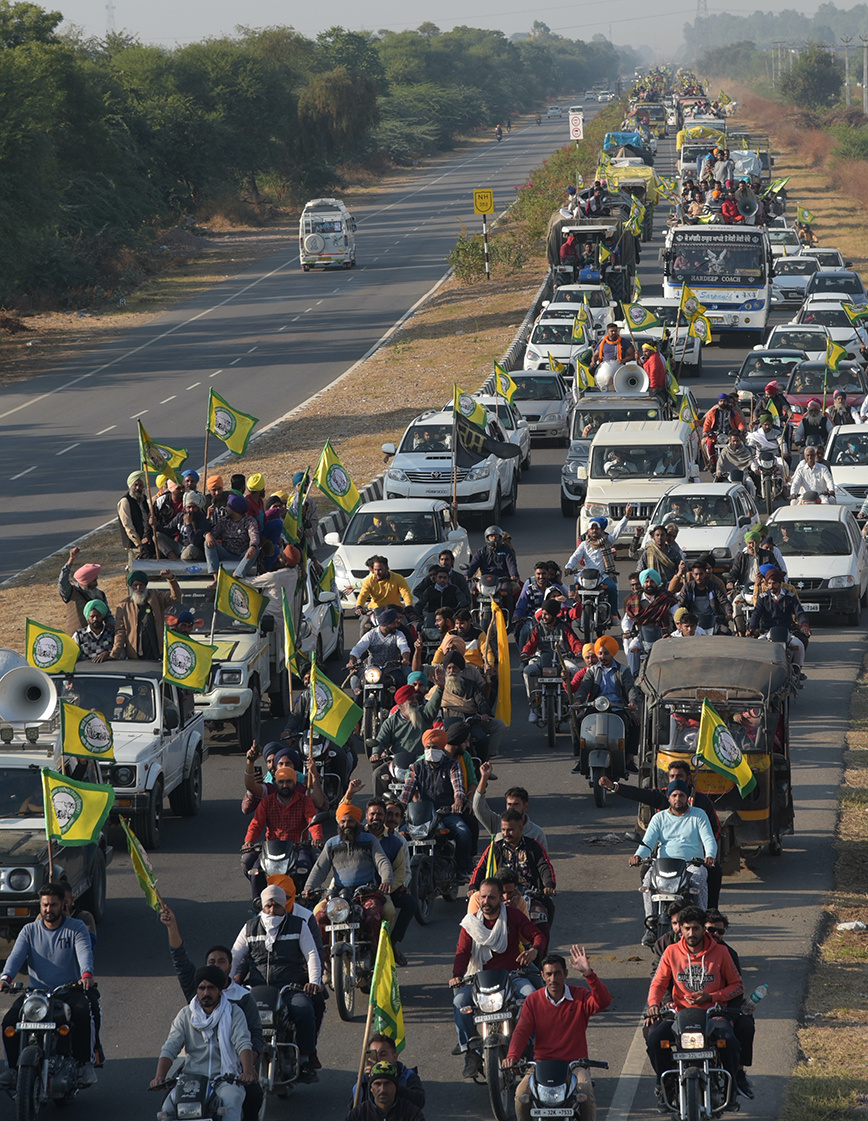 The farmers began their campaign last year in different cities across the states of Punjab and Haryana / Image: Randeep Maddoke, Wikimedia Commons

The new legislation was about throwing farmers to the wolves of multinational agribusiness, and their passage would have seen a massive rise in poverty, suicides, destitution and deaths of farmers (all of which are already rampant), alongside heavily indebting them to banks and corporations.

The farmers began their campaign last year in different cities across the states of Punjab and Haryana. Under the banner of Samyukt Kisan Morcha (SKM), farmers’ groups marched towards the capital and organised sit-ins at the main highways entering the capital, Delhi.

A huge wave of support began pouring in from all sections of the society, including the working class, in India and abroad. The Modi government initiated a series of talks with the farmers’ leaders, which later proved to be a diversion that aimed to simply run down the clock and exhaust the struggle. The farmers’ leadership realised this after 11 failed talks.

In this struggle, around 700 farmers died, including our very dear sympathiser, Datar Singh, the president of Kirti Kisan Union Punjab, who suffered a fatal heart attack during the sit-in at the Delhi border.

Farmers struggled day and night at the borders. They faced police batons, beatings and killings by Modi’s right-wing goons in Lakhimpur. Several were jailed, and the mainstream media brought down a deluge of poison upon their struggle.

After the events of 26 January, India’s Republic Day, in which hundreds of thousands of farmers marched into New Delhi and seized the Red Fort, the movement spread to the largest state of Uttar Pradesh. This dramatic development transformed the whole situation.

Huge numbers of farmers came out in the state of Uttar Pradesh and other parts of the country and Modi unleashed police to crush the initial gatherings in order to prevent the movement spreading to other states. But the farmers turned the tables and came out in even larger numbers. The movement that was initially limited to western part of the state spread to other parts and neighbouring states.

The bankruptcy of the mainstream parties

All mainstream political parties, including Congress, SAD [a right-wing, Sikh-centric party], the leaders in the CPI-M, and the rest, played a criminal role, keeping a distance between themselves and the main farmers’ struggle. Once the struggle garnered wide public support, these party leaders simply danced around the fringes.

In some instances, they were forced to perform about-faces under pressure from the masses. The far-right Shiromani Akali Dal (SAD) party initially gave its immediate support to Modi, favouring the anti-farmer laws. However, in the face of the rage of huge numbers of farmers, they soon carried out a u-turn. 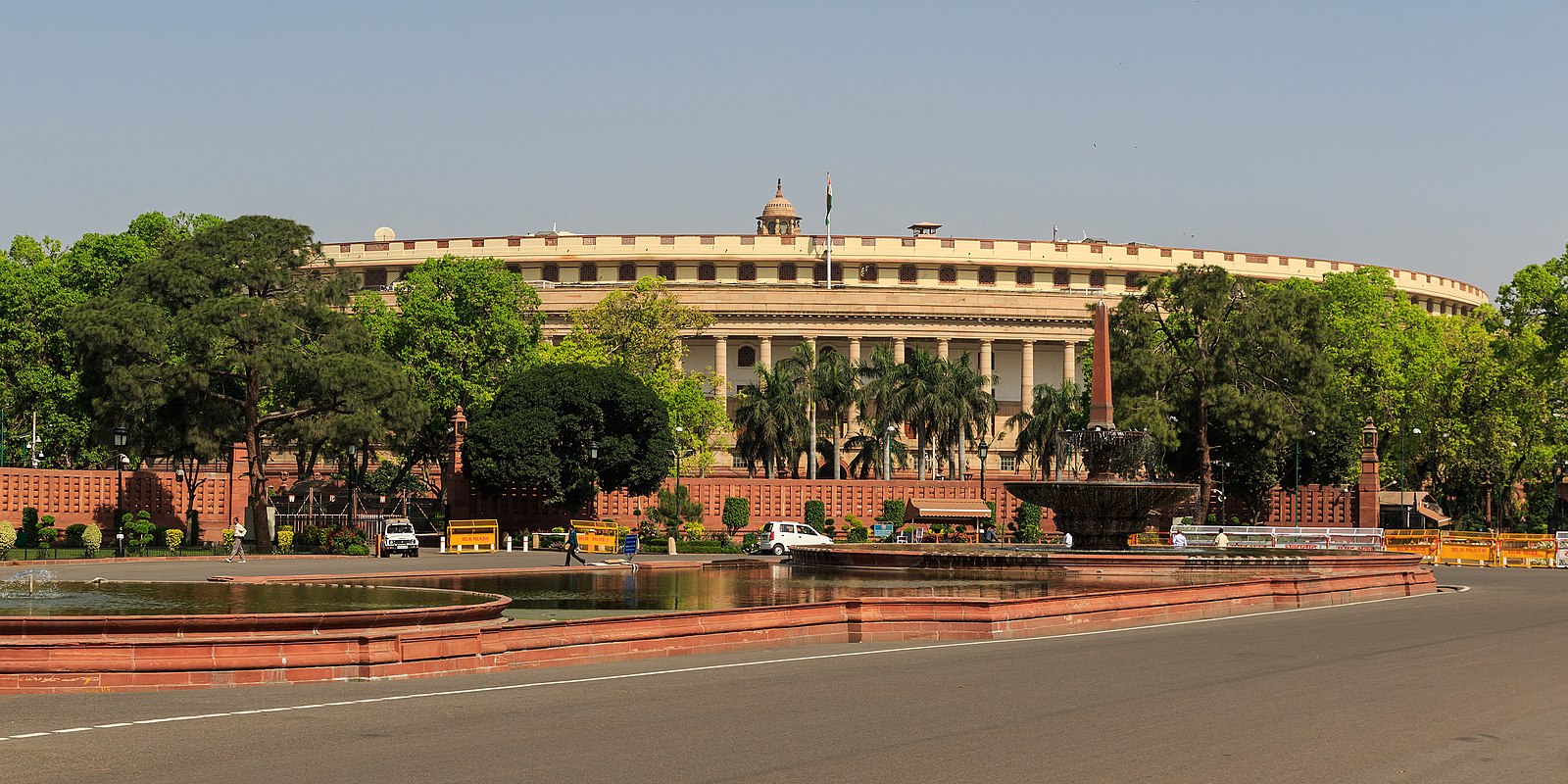 Congress and other parties were completely morally compromised and had no principled foundation for siding with the farmers – during their rule, they were themselves the key architects of the corporatisation of agriculture and anti-farmer measures / Image: A Savin, Wikimedia Commons

Congress and other parties were completely morally compromised and had no principled foundation for siding with the farmers – during their rule, they were themselves the key architects of the corporatisation of agriculture and anti-farmer measures.

The Stalinist leaders of CPI-M, who are famously known as butchers of the Bengal farmers, shamelessly kept themselves at a distance, hiding behind an alliance of opposition parties led by arch-reactionary leaders.

Despite token support from this grand alliance of thieves, all of their actions failed miserably to help the farmers in their struggle. These parties kept their grassroots members away from the farmers’ struggles so as to ensure that they should not become infected with the radical spirit of the farmers.

All parties agree with the exploitative policies of Modi in principle. Their only objection is to the manner in which they are being implemented.

The role of the corruption-ridden Indian judiciary and central administration was also laid bare. Initially, farmers leaders had certain illusions in the ‘mighty’ and ‘independent’ supreme court to resolve the matter. 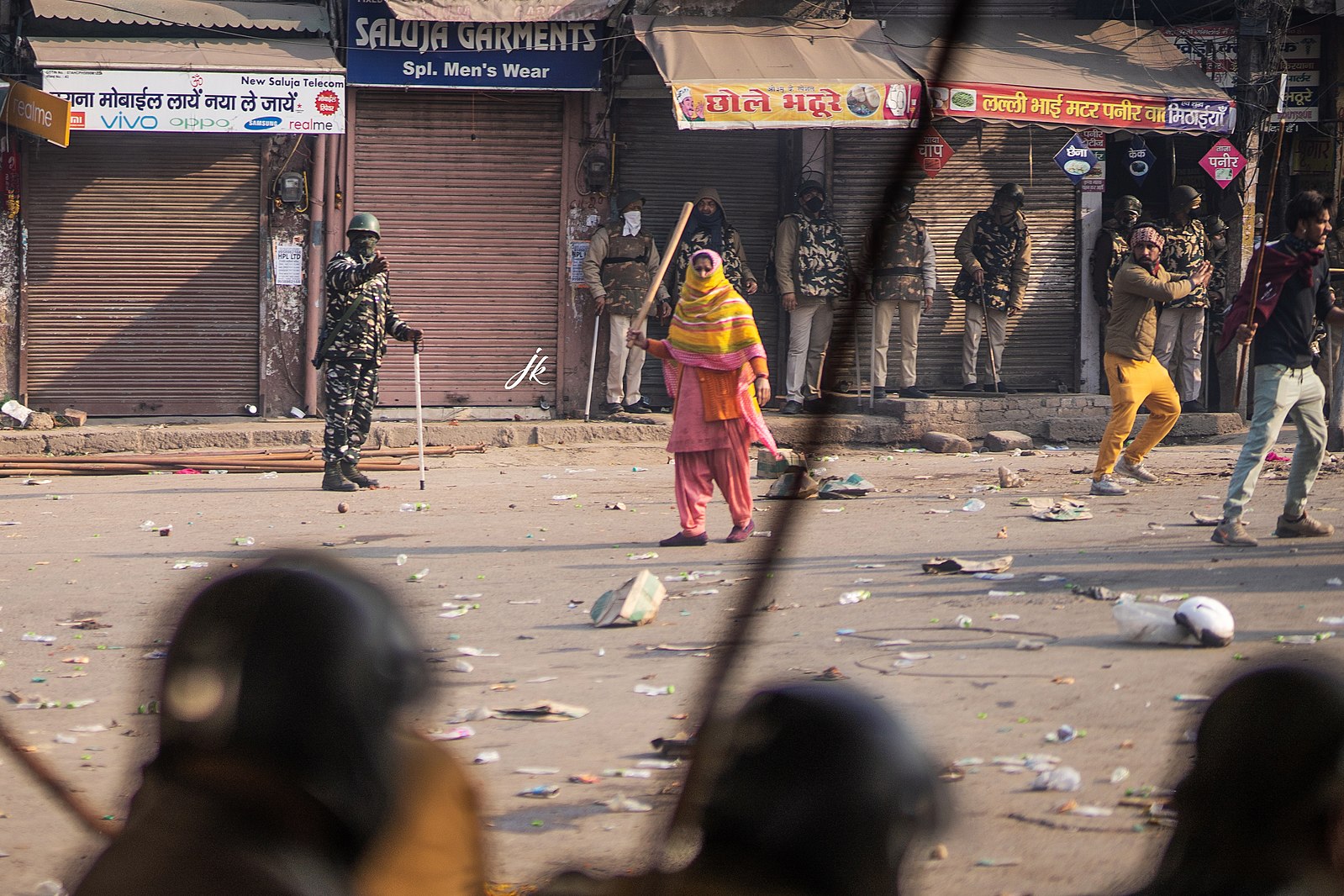 The farmers defeated Modi and his capitalist masters through their own strength alone / Image: Jaskaran, Wikimedia Commons

However, the supreme court did nothing besides forming a committee of anti-farmer leaders, experts and professors to ‘look into the matter’. This experiment failed miserably. When it comes to defending the interests of capitalists, the judiciary is never independent – and this experience served as a great lesson for farmers.

In the coming days, this could open up a nightmare situation for Modi and his crooks, including India’s biggest moguls, Adani and Ambani. They will be forced to reassess the situation and possibly adjust their tactics.

Congratulations to the farmers! For a worker-farmer struggle against Modi!

The farmers deserve huge congratulations and the entire international labour movement ought to salute their victory: they are right to celebrate their success. They have set an example for the Indian and the international working class. Only a determined and uncompromising struggle can lead to victory. 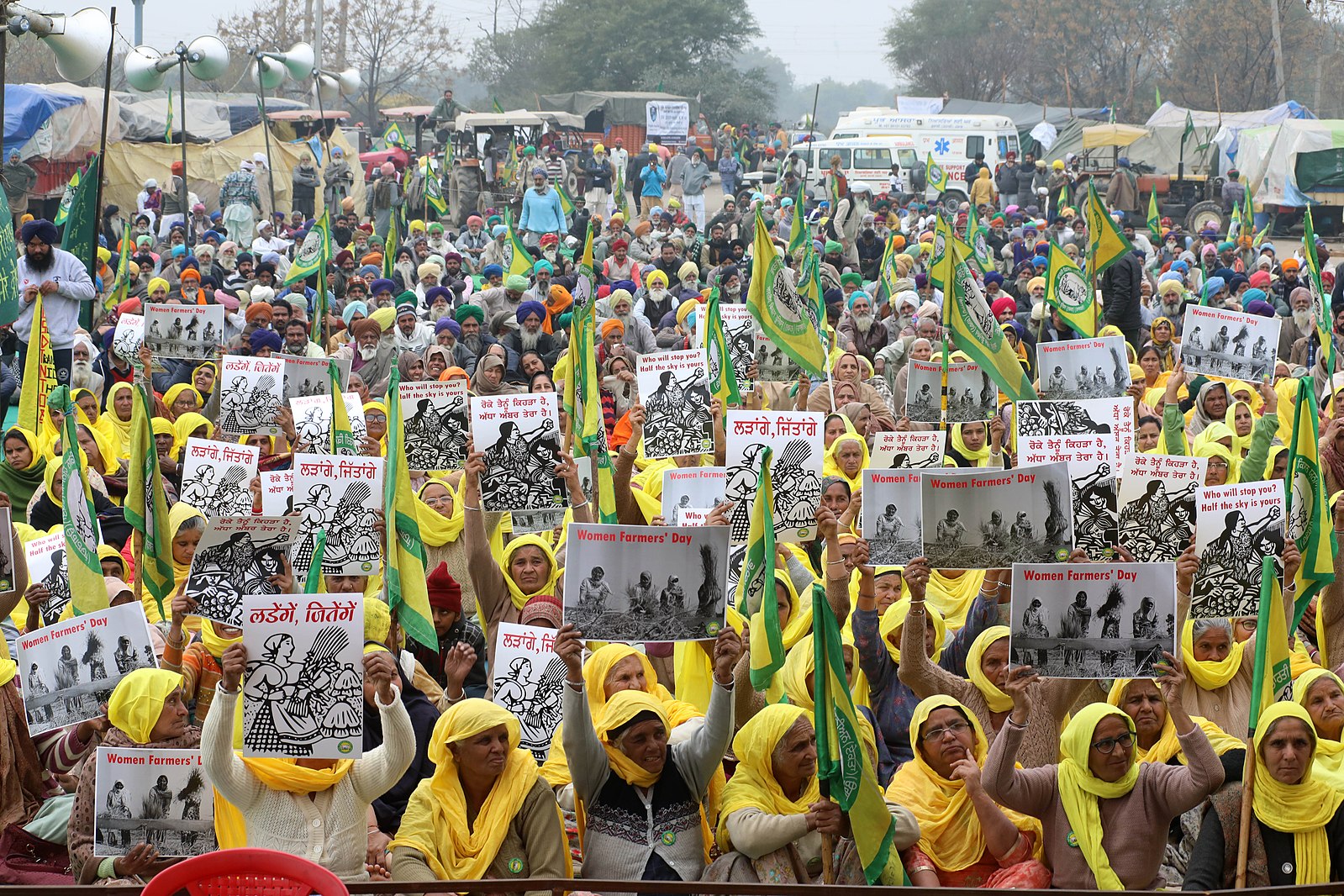 The farmers deserve huge congratulations and the entire international labour movement ought to salute their victory: they are right to celebrate their success / Image: Randeep Maddoke, Wikimedia Commons

The International Marxist Tendency (IMT) has backed the farmers from day one of their struggle. The IMT published reports and articles on the farmers’ struggles and interviewed the late farmer leader Datar Singh of Kirti Kisan Union Punjab. Comrades of the IMT intervened in various working-class organisations and trade unions in other countries to spread the farmers’ message internationally. Motions were presented in trade unions and many solidarity messages came in from prominent members of the international labour movement.

Our comrades and sympathisers intervened in the struggle with revolutionary ideas and perspectives that were widely welcomed by the farmers. The messages of the IMT were taken into the struggle by our sympathisers and reached the farmers and their organisations. Key among those was the call for a joint farmer-worker struggle for an indefinite general strike to bring down Modi’s government.

This coincided with the experiences of the farmers themselves who, under the impact of events, concluded that they must proactively approach the working class organisations and strive for a united struggle of workers and farmers. However, the Stalinist leadership of the Indian trade unions shamelessly insulated its members from the farmers’ struggle. Even without the involvement of the latter, however, the farmers courageously marched on the parliament: shaming the Stalinist bureaucrats and showing the rank-and-file workers the way forward.

This is a massive victory for Indian farmers. There will be more battles ahead, especially when Modi and his accomplices reassess the situation and regroup to wage further attacks aimed at the corporatisation of agriculture. 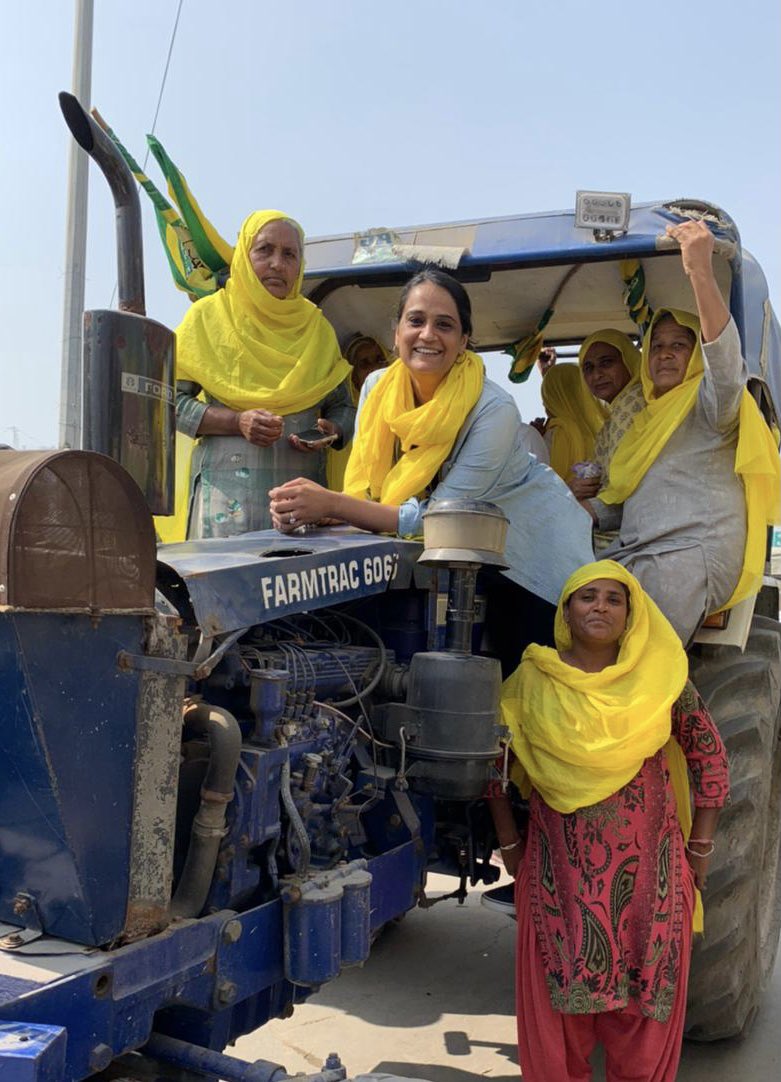 This is a massive victory for Indian farmers. There will be more battles ahead, especially when Modi and his accomplices reassess the situation and regroup to wage further attacks aimed at the corporatisation of agriculture / Image: Jugnu Grewal Almeida, Twitter

However, India’s farmers are now more vigilant, organised, and conscious than before, and they have the capacity to fight back against every significant attack. This victory will have a huge impact on the politics of India, and will transform it in coming times.

The bankruptcy of all the opposition parties, including the communist parties, is clear to the masses, and the rottenness of the entire political spectrum and state institutions has been exposed by this movement.

This will have unprecedented reverberations on the consciousness of the working class. In the last seven years, Modi has been portrayed as infallible and undefeatable. But now, the farmers have dealt him and his whole regime a defeat hands down.

The next step is to fight against the privatisation policy of the monetary pipeline, against which a general strike is being organised on 26 November 2021. Farmers must support this strike and bring this regime down, while moving towards an indefinite general strike with all the farmers and workers united in action.

Farmers and workers of India need a political party that caters its programme to their needs. The aims of the working class can only be achieved by the overthrow of capitalism and carrying out a socialist revolution.

A revolutionary party, based on the ideas of Marx, Engels, Lenin, and Trotsky, must be built in this situation to carry forward this huge task for the socialist transformation.

Congratulations to the Indian farmers on their victory!

Resist all further attacks by Modi and his capitalist masters!

Farmers and workers, unite and fight!