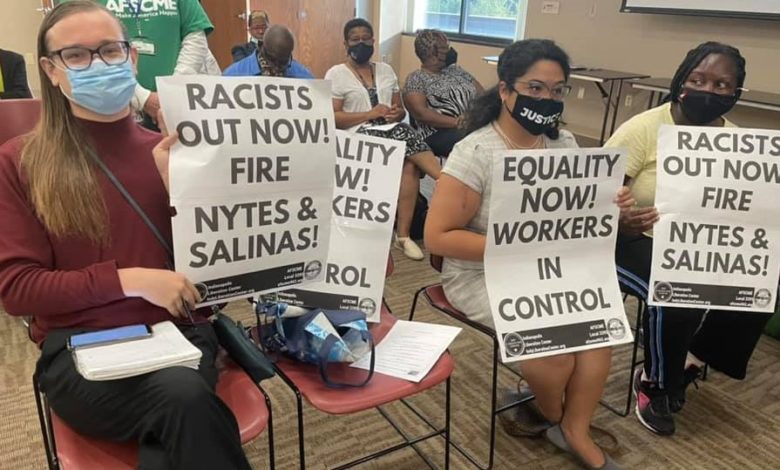 Jackie Nytes, CEO of the Indianapolis Public Library, announced that she was resigning August 20 in an email to library workers. Nytes, who was named CEO in 2012, had said for months that she would not step down from her position amid a persistent campaign from workers and the community over allegations of racism and a toxic work environment.

Nytes’s email to workers began, “The heaviness that hangs over the library these days is something that we haven’t been able to shake,” immediately conflating her feelings over being publicly charged with racism with the library’s work environment. She also minimized the testimony of Black patrons and workers, saying her resignation will allow the library to focus on other work “without the distractions.”

This racist belittlement of Black and other non-white workers and community members to the very end is proof that their testimony has been accurate from the start. Her resignation in the face of a sustained popular movement shows that workers and the community can organize and win major victories even against entrenched corporate bosses.

Heroic public statement was spark that inspired a movement

In May, library employee Bree Flannelly, a Black woman, was muted by board president Jose Salinas before she could give testimony during a library board meeting. After two Black women on the board, Patricia Payne and Khaula Murtadha, insisted that her testimony be heard, she was unmuted. Her testimony was scathing, describing the vitriolic racism she experienced at the library, including hearing staff calling Black patrons “porch monkeys.” Payne agreed with Flannelly’s testimony, describing the library as “a plantation,” where “you have the house employees, which is not the word I want to use, but they’re receiving favor, and the field employees are receiving punishment.”

Salinas, who is also a judge in the Marion County Superior Court, also faces calls to step down.

After Flannelly blew the whistle, protests, a petition and educational forums were organized throughout the summer by AFSCME Local 3395 and the Indianapolis Liberation Center, whose member organizations include the Indianapolis branch of the Party for Socialism and Liberation. Protests were organized at the Library Services Center and during board meetings. A forum organized at the AFSCME union hall brought dozens of community members together to educate the community on the struggle and how they could get involved.

Prior to being named the library’s CEO in 2012, Nytes was the Chief Financial Officer for the library. For 12 years, she was the city-county councilor for District 9. She was also president of the Indiana Economic Development Council. Her bio says that she serves on the boards of the Indianapolis Symphony Orchestra, the Indianapolis Chamber of Commerce and the Immigrant Welcome Center.

The resignation comes nearly a month after Nytes mistakenly emailed all workers at a library branch a message she intended for a Black colleague “Dr. Smith,” presumably Dr. Shawn Smith, Superintendent of Indianapolis’s MSD Lawrence Township. In that email, she framed the struggle as “personal disagreements” and laid out a half-baked plan to defend her reputation:

We are talking about a letter from Black community leaders supporting me, the board and the library. This could be sent as a Letter to Editor to the [Indianapolis] Star, IBJ [Indianapolis Business Journal] and Recorder [Indianapolis Recorder, Indy’s Black newspaper] with multiple signatures. Do you think you could recruit some Black leaders to sign it? Would you sign it? I don’t want to offend by asking, but it is clear that the library is getting damaged by the current narrative and I just don’t think it is an accurate narrative and I am trying to counter it!

This email caused another round of negative press coverage for Nytes, and was possibly the catalyst for the Central Indiana Community Foundation to add its weight to the struggle. No such letter from Black community leaders ever materialized, further damaging Nytes’s position.

The Central Indiana Community Foundation released a statement August 9 that said they were “disheartened and concerned” by the testimony of workers and the community, noting in particular the statements of “Black women and other BIPOC.” The foundation announced that they would withhold any additional funding to the IPL until a planned race climate survey and action steps had been taken and “significant, meaningful and measurable change toward a more equitable internal environment is evident.”

The CICF controls the $28-million Library Fund, which distributes charitable contributions to libraries across Marion County, from K-12 school libraries to university libraries to city libraries like the IPL. In 2020, the IPL received more than $700,000 from the Library Fund used to provide a variety of services including rentable Chromebooks, Wi-Fi hotspots and LGBTQ programming.

CICF’s move was met with scrutiny by elements of the anti-racist movement who are justifiably concerned that, should the library’s bosses fail to act, the loss of funding would lead to negative impacts for working-class Black patrons and employees who could see services or jobs cut in a cost-saving measure.

Part of the problem is that so many necessary public services are treated as philanthropic games used to enhance the image of the wealthy and ruling class. The Board of Directors of CICF (and of its affiliate, The Indianapolis Foundation, which directly oversees the Library Fund) is full of capitalists and their descendants whose wealth was acquired through mass exploitation. These foundations masquerade as “community” foundations by having their board appointed by the Mayor of Indianapolis and two judges, but in reality there is no semblance of real community control over the foundation or its funding.

Cindy Simon Skjodt, Chair of the Indianapolis Foundation board, is daughter of real estate magnate Melvin Simon, co-founder of the largest mall company in the United States, Simon Property Group. Herb Simon, Melvin’s brother and fellow Simon Property Group co-founder, was owner of the Indiana Pacers. In 2015, Forbes estimated the net worth of the entire Simon family at $7.7 billion.

Of the seven directors on the Indianapolis Foundation board, only one is not white: Kameelah Shaheed-Diallo, a Black woman. Shaheed-Diallo was formerly the Senior Vice President of Strategy and Community Engagement for The Mind Trust, a non-profit organization that works to undermine true public control of public education in Indianapolis through various means, including “innovation schools” that rip school buildings from public school corporations and transfer them to the control of charter schools or non-profit boards with no public oversight.

Only solution is worker control of the workplace and society

The issues at the Indianapolis Public Library could have been solved immediately if rank-and-file workers, most critically the Black and Brown workers whose voices have been ignored, had control over their workplace. Workers made the point that if they were not competent in their roles, that the library would not hesitate to fire them. They successfully argued that a racist boss cannot be competent in a leadership position in 2021, and that the opportunity for Nytes to correct her behavior and stay in the CEO role had come and gone.

The library board must be held to its promises to hold a work climate study focusing on race and to act rapidly to remedy all problems that this study reveals. Board President Salinas must also resign for his role in attempting to silence Flannelly and for continuing to insist that his reputation is more important than the library.

But even if the library were fully controlled by workers, the nature of this struggle reveals that this would not be sufficient. The fact that the library, a necessary public service, relies on funding from a supposedly “community” foundation that is controlled by the most well-connected capitalists in Indianapolis, illuminates that the fight cannot end at the workplace. Workers need to have a say in what happens in their workplaces and have control how important public services are funded. Only by seizing the means of production in their entirety will workers be free from the many petty dictatorships established to entrench capitalist control over society.