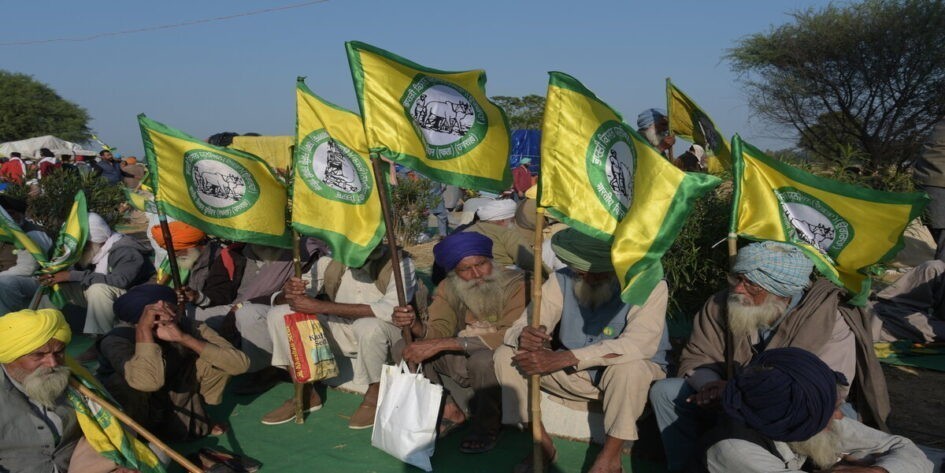 It has been nearly a year since India’s BJP (Bharatiya Janata Party) government first promulgated a set of farm laws designed to encourage private sector investment in agriculture. In response, a militant Kisaan Andolan (Farmers’ Movement) opposition grew out of the fear that the laws would undermine the public market – or mandi – system, and effectively enable large corporate agribusiness interests to monopolise control over agricultural trade.

The mandi system had offered farmers assured prices from government agencies, protecting them from having to make distress sales at low prices to private grain-trading intermediaries. The Kisaan Andolan response to the undermining of that system by the new laws renews an old confrontation over the appropriation of surplus value in the ‘agrarian south’. That confrontation was set in motion by the rise of neoliberal global capital accumulation in the late 20th century.

Neoliberalism emerged as a strategy for overcoming the constraints imposed on capital accumulation by the post-war international order, consisting of Keynesian welfare states in the global north and national developmental states in the global south. By the 1970s, these constraints would lead to crises of over-accumulation of capital and over-production of agricultural and industrial output – particularly of wheat, rice and corn. The 1995 World Trade Organisation (WTO) Agreement on Agriculture consolidated a neoliberal regime oriented towards resolving such a crisis of profitability for agribusiness capital. It would facilitate ‘free’ global market competition by requiring developing states to remove their so-called ‘trade distorting’ farmer support programmes. Structural adjustment thus enabled overproducing global north agribusinesses to dump their surplus on global south states.

The 2020 laws have opened further space for the neoliberal mode of global agribusiness accumulation that aims to capture the surplus value of the real agricultural economy. Alongside the more conventional mode of agribusiness accumulation, however, the farm laws have also been shaped by an emergent agri-tech mode of accumulation, centered on harvesting data to generate profits through financial speculation in the derivative agricultural economy.

When negotiating an International Monetary Fund (IMF) bailout package and ascension into the WTO in the early 1990s, key policy-makers in India embraced structural adjustment. Neoliberal reforms in agriculture included reducing input subsidies, scaling back public infrastructure investment in rural areas and rolling back rural public credit provision. Global north states applied further pressure through WTO negotiations for India to dramatically scale back the minimum support prices (MSPs) the state had provided to stabilise farmers’ livelihoods. The MSP provides farmers with a guaranteed minimum price for certain crops that cannot be altered once set, therefore acting as a crucial safety net. While the state resisted the outright dismantling of the MSP system for food grains in the 1990s due to pressure from farmers, it did scale back support for particular crops.

The reforms increased costs borne by farmers, generating a debt crisis that contributed to a tragic epidemic of farmer suicides in India in the 1990s and 2000s. While the reduction of input subsidies and exposure to global market competition increased levels of indebtedness, the collapse of public credit offered through regional rural banks forced farmers to turn to either informal moneylenders or private sector banks. These charged high interest rates and entrapped borrowers in inescapable cycles of debt-interest payments.

The first BJP government (1999-2004) moved to further entrench neoliberal agrarian reforms initiated under the previous Congress government. Increasing opposition to the neoliberal consensus from agrarian sectors played a significant role in the defeat of the BJP government in the 2004 elections and forced the incoming government to reverse the neoliberal programme and renew support for agricultural livelihoods. This led to a series of laws that guaranteed access to rural employment and food, and defended farmers’ land rights against corporate interests.

As India and other ‘rising’ global south states enacted ameliorative measures, a growing convergence between financial and agribusiness capital was being forged as a means of escaping ongoing structural crises of over-accumulation and over-production. To sustain a sufficient rate of profit, multinationals such as Cargill moved to monopolise both high volumes of the global grain trade and access to information of ‘on the ground’ agricultural conditions. Control over information in key commodity-producing and consuming regions has enabled these firms to act before competitors and maximise profits.

As the overproduction crisis continued to squeeze grain trade margins, agribusiness firms took advantage of increasing global deregulation of financial speculation in agricultural commodities from the 2000s onwards. This enabled them to pursue higher (and more rapidly realised) rates of profit through trade in agricultural derivatives. The links between finance and agriculture were simultaneously being deepened from the opposite direction, as finance capital itself sought refuge from the 2008 financial crisis by rapidly exiting conventional financial markets and rushing into agricultural commodity and land markets that were identified as more secure forms of investment. Combined, these two movements – the financialisation of agriculture and the agriculturalisation of finance – converged to generate momentum towards an emergent financial-agribusiness mode of accumulation.

This financial-agribusiness model was consolidated further with the renewal of artificial intelligence (AI) from the mid 2000s. Advances in technology increased capacity for data collection, processing and deployment. The broader implications of the rise of AI have largely come to be associated with the emergence of the ‘platform capitalism’ of the big tech firms (Facebook, Google and Amazon) and their data harvesting operations.

Platform capitalism has now, to a great extent, converged with financial-agribusiness, however. The ‘Cargill platform’, launched in the mid 1980s, harvested information from Cargill’s subsidiaries and contractors, providing data that enabled higher margins in grain trading. Throughout the 2000s, the platform enabled Cargill to position itself as an attractive fund manager for larger institutional investors seeking both a stable rate of return on investments in the real agricultural economy and a high rapid return available through speculating in agricultural derivatives markets. The platform’s capacity to access vast quantities of data positioned Cargill to anticipate and possibly manipulate commodity price swings. Further development of agri-tech data analytics over the past decade, through precision farm technologies and smart apps, has made it possible for agribusiness firms to build out larger platform capacity. In turn, they are able to access and process greater quantities of data.

With the BJP returning to power in 2014 under Narendra Modi, India’s grain trade was once again in the sightlines of global agribusiness. Cargill – at this point an established food processor in India – enthusiastically embraced the new government’s creation of a ‘favourable business climate’. The dismantling of the MSP system would enable the Indian grain trade to be captured by private agribusiness interests. Specifically, the shift from the public mandi system to private procurement via smart apps would provide large agribusiness firms such as Cargill with access to data on local soil quality, weather patterns, political conflicts etc… that could enhance its capacity to generate profits for investors.

In addition to firms such as Cargill, there are domestic capitalist forces at play. Most prominent among these is Reliance Inc, which aims to diversify into agritech via its JioKrishi app, with an explicit goal of taking over India’s food system ‘from farm to fork’. The app received significant investment from Facebook for a 9.99 per cent stake in early 2020, offering an opening for the introduction of WhatsApp payment in India, and subsequent regulatory approval, where it had previously struggled. However, the digital agricultural market that Reliance is hoping to build and dominate depends upon dismantling the existing mandi system. Reliance promises increased ‘efficiency’ and safety in a Covid-19 context, enabling customers to order food through the app and have it delivered directly to their homes, and farmers to find and sell to the highest bidder. The reality, of course, may prove to be less favourable than Reliance suggests.

Whether through Cargill’s platform or Reliance-Facebook, agri-tech profit-seeking and accumulation in India will be built on extracting value via data from farmers. Farmers will provide data through app use and will be forced to adjust their behaviour according to the data analytics returned to them by agribusinesses holding a data monopoly. Ultimately, this will produce an unequal market, whereby farmers are forced to sell their harvest to and through firms with monopolies on profit-enabling information. Conversely, the old ‘national development’ system had at least allowed farmers to negotiate with the state on a more collective footing, based on access to public knowledge with state oversight.

The Kisaan Andolan resistance makes clear that Indian farmers and labourers do not buy the claims of Cargill and Reliance. Instead of a more efficient and productive farm to fork system that will benefit both farmers and consumers, farmers rightly anticipate a future in which large grain traders corner markets and set the low prices at which they will be forced to sell their grains. This may in fact lead to the mass ‘exit from agriculture’ that is often conceptualised as the end point of development. By now, however, nearly 30 years after India began liberalising and privatising its agricultural sector, it is clear that there are simply not enough post-agricultural jobs that displaced cultivators can turn towards.

Dr Bikrum Gill is an assistant professor at Virginia Tech