Indigenous Peoples Day in the time of COVID-19 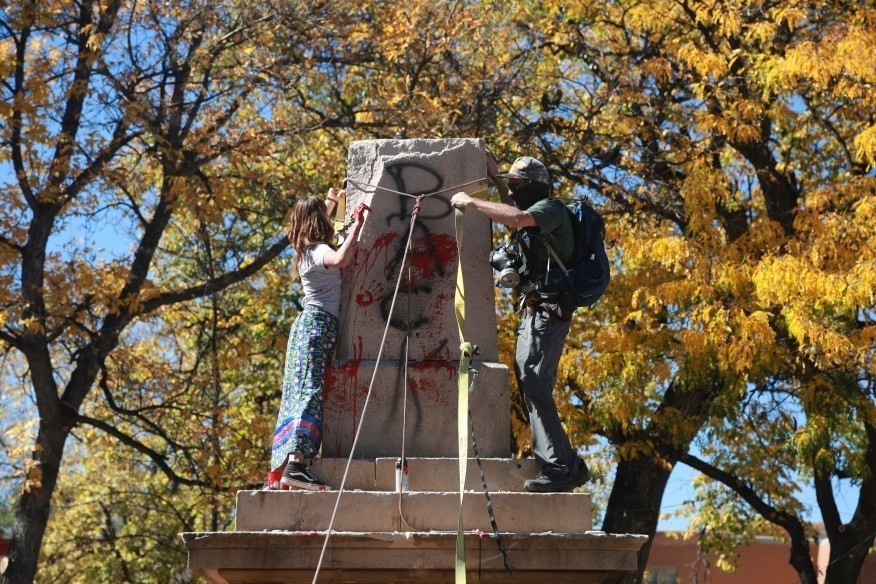 This article was first published in the Oct. 14, 2020, issue of Workers World. On Oct. 7, 2021, a new study from the Centers for Disease Control and Prevention reported that nearly one in 500 children in the U.S. have experienced the loss of a parent or caregiver since the start of the COVID-19 pandemic. For Indigenous children the number is one in 168.

To see people still celebrating Columbus in the time of COVID immediately brings to mind the smallpox and other pandemics which swept this hemisphere from ocean to ocean as it was stolen following 1492. Spanish conquistadors and European colonial invaders carried disease to every corner of this hemisphere. In 1492 no one in the so-called “western” hemisphere had immunity to European and Asian diseases, which had jumped species from rats and domesticated herd animals to humans. It is estimated that some 112 million people were living in this hemisphere in 1491: Smallpox, flu, measles and other imported infectious disease vectors then killed 80 million to 100 million people in 100 years.

Christopher Columbus’ real name was Cristóbol Colón; he was a Spanish pirate. The Spanish Queen would have executed him had she known. There is no evidence he was ever in Genoa. When he landed in 1492 in the Bay of Pigs (Playa Girón) in Cuba, he immediately wrote to the queen to advocate enslaving Native peoples. Columbus cut off the arms of Taíno men to feed the war dogs he used to terrorize Indigenous people.

Pizarro took Inca leader Atahualpa hostage and melted down his ransom of seven tons of gold and 13 tons of silver, all of which was artwork and jewelry. Some $129 million in gold was shipped to Spain every year. In the largest colonial rebellion against Spain, the Incas melted gold and poured it down the conquistadors’ throats.

De Soto’s expedition group traveled from Florida across the Mississippi to Arkansas, all the way following existing Indigenous roads and paths from Native town to Native city — stealing food and burning storehouses, fields and towns. They enslaved local Indigenous people and burned them alive if they made trouble. De Soto cut off their hands if they didn’t lead him to gold.

De Soto used his imported war hogs to roust people out of fields as they invaded, and smallpox and seven other disease vectors living in the guts of de Soto’s pigs spread disease everywhere. The great Mississippian culture fell in a few short years as a result of these new diseases. Only mounds remain of their vast earthen pyramids.

After Oñate worked thousands of people to death in the gold and silver mines of Zacatecas, he left Mexico to take over the vast lands to the north, which he named New Mexico — home of the great Puebloan cities, as well as the Diné and Apache Nations.

Oñate attacked Acoma Pueblo in 1599, when it rose up against the settlers. His men killed 800 children, women and men. Oñate ordered every man over 25 to have a foot cut off and sentenced each to 25 years of slavery. Females and males between 12 and 25 years of age got 25 years of slavery. Sixty young girls were sent to priests in Mexico, never to return to their homes.

In New Mexico in 1680, the Pueblos rebelled and burnt out the Spanish and kicked them out for 12 years — the second largest anti-Spanish colonial rebellion. No one erects a statue to Oñate to this day without protest, and this year his statues were brought down across New Mexico by Puebloan activists.

Coronado wandered all over the Southwest in search of gold; he attacked, occupied and burned the Pueblo towns he encountered — Puebloan territory had then extended all the way into what is now Texas.

Decimated Indigenous nations faced unending waves of Spanish, French, English and then American settlers — all mean with greed and emboldened by racist propaganda — coming to steal the land and create wealth. Smallpox blankets were used to steal lands to build the United States.

Historically, Indigenous societies were gardening and farming societies. Over one half of all food crops in the world, by numbers of species and by volume, were domesticated by Indigenous people in this hemisphere — tomatoes, squashes, beans, chocolate, pumpkins, pineapples, cassava, avocados, papaya, quinoa, amaranth, acai, chiles and many more.

Maize corn was the world’s first selectively bred food grain. Varieties of maize corn were cropped from Mexico up and down the East Coast, all over the Mississippi River valley and the Southwest.

In the Chilca Canyon of Peru, 10,000 years ago, the potato was domesticated — hundreds of varieties for every altitude from the high peaks to the valleys. Incan civilization grew from ancient farming communities, which held land in common. Incas distributed stored supplies from public warehouses to the sick, elderly, poor, widows and the disabled. Cusco had a population of 50,000-100,000, and there were many smaller cities and towns.

And across this continent, people lived communally in small villages and cities; most of those societies still had a matrilineal structure. The precolonial history and cultures of Indigenous societies are what Indigenous Peoples Day celebrates.

This is all stolen land. The struggle continues. This is the significance of Indigenous Peoples Day.