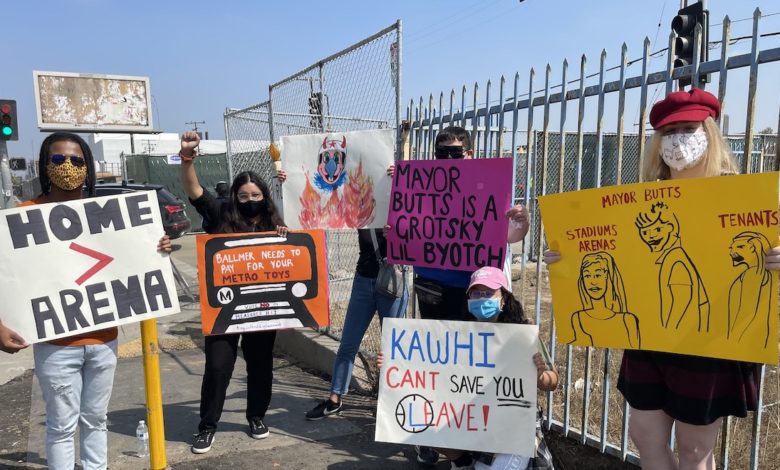 On the morning of September 17, dozens of tenants, organizers, and concerned Inglewood and Lennox community members gathered outside the groundbreaking ceremony for the new stadium for the Los Angeles Clippers basketball team. Inglewood is a city in the Los Angeles metropolitan area with over 100,000 residents. The city has a history of Klan terror, segregation, and curfews for Black people as late as the 1960’s. The city is built on neglect and forceful removal of Black and Brown lower-income neighborhoods to build highways, but today the city is 50.6% Latino and 43.9% Black.

The Intuit Dome is a $1.8 billion project being promoted by billionaire investors like Steve Ballmer, the Clippers owner and former Microsoft CEO worth $96.2 billion. The 18,000-seat stadium with an 80,000 square foot outdoor plaza will require an immense labor force and billions of dollars, while the Lennox and Inglewood communities suffer with homelessness, rising rent costs, and displacement.

The stadium’s groundbreaking ceremony was attended by Inglewood Mayor James Butts, Clippers owner Steve Ballmer, basketball stars Kawhi Leonard and Paul George, and head coach Tyronn Lue. While the ceremony planners were expecting a closed-off gathering for investors, the press, and spectators who paid for tickets, a grassroots collective of community residents had other plans. These protesters gathered on the corner of West 102nd Street & South Prairie Avenue, right at the opening to the stadium grounds to get across the people’s message: Homes not Domes.

With the 2028 Summer Olympics set to be held in Los Angeles for the third time (after the 1932 and 1984 games), this stadium construction must be seen in the context of LA’s governments prioritizing entertainment and profits over working class housing rights. In the 1950’s, Los Angeles was the site of a historic struggle against the violent, mass relocation of over 1,800 families to create the Dodger Stadium in Chavez Ravine. Inglewood itself already holds The Forum, modeled after Madison Square Garden, and the SoFi Stadium, the home of the Los Angeles Rams and Los Angeles Chargers football teams.

Estefany Castañeda is a community organizer with the Lennox-Inglewood Tenants Union and local high school board member who helped lead the rally and keep the energy high. On the origins of the protest, she said “A friend of ours on the Lennox-Inglewood Tenants Union page (@litunion) posted information about the groundbreaking ceremony, so I contacted them and said ‘let’s do a protest!’” The community members rapidly pulled together a planning meeting to respond to this looming crisis for the Inglewood community.

Rick Foard is an Inglewood resident and member of the Lennox-Inglewood Tenants Union who’s been active with his wife for about a year and a half. Foard and his wife lived in Newark, New Jersey for 39 years before moving to California. Foard came to protest “not only because it’s such a crucial issue for the citizens of Inglewood and Lennox, but it’s an issue that is related to all kinds of things all over the world with displacement, with the Olympics, with gentrification. This is a worldwide problem, as is the problem of racism.”

While capitalist, pro-stadium speakers and spectators inside the ceremony discussed how good this stadium will be for the community in the form of affordable housing, a terrible scene outside proved the opposite in real time. Soon after the protest started, three police cars protected city workers as they tore down an unhoused person’s bus stop encampment. Party for Socialism and Liberation organizer and South Central resident Alexa Pantuck commented that the person was evicted without warning while he was gone. “They took his backpack, cooler, food, books, everything”, she commented.

Estefany Castañeda highlighted the contradiction and hypocrisy of the stadium investors’ goals and the true impact they’re having on the community. Castañeda commented, “Counter to the media’s narrative, the community didn’t ask for the Clippers Dome and we were not included in any planning concerning how it would affect our immediate communities.” Inglewood communities already face high mortality rates, asthma, premature births (resulting from smog and particulate matter). She spoke about the yellow airplane fuel residue that residents see every morning – “the closer you live to the airport, the thicker the coating.”

The ING Fellowship (@ingfellowship), a civic engagement group founded to encourage youth activism and community mobilization in Inglewood, played a key role in the protest. Lily, the co-chair for organizing and a member of LITU, attended to support the grassroots protest.

Lily offered words of encouragement to Liberation News readers: “The best thing you can do is: if you have an idea, just talk to your folks. You never know who else is down for the cause, so it’s definitely worth the effort to gather your people.”

Fight them on the beaches