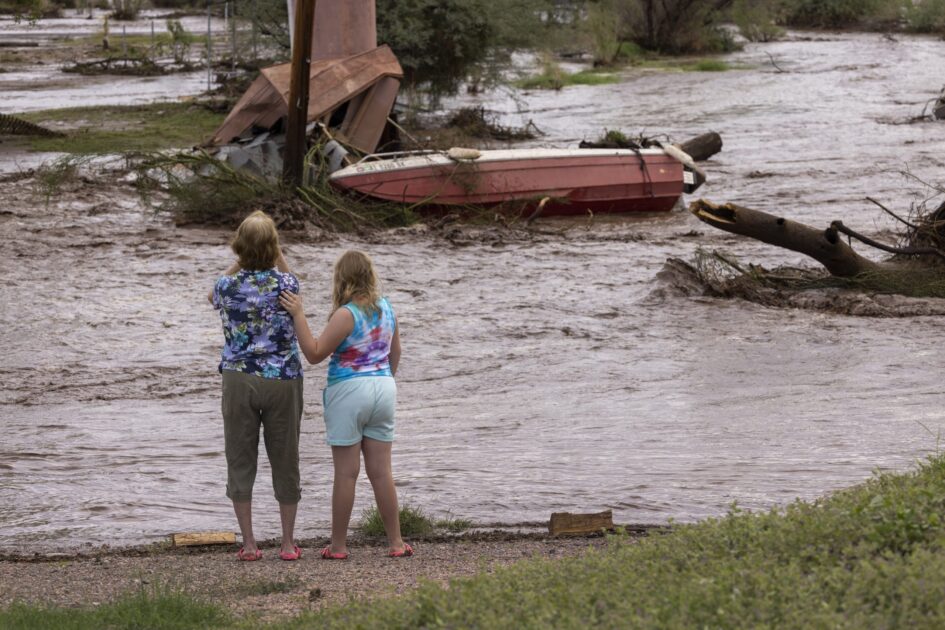 This story was originally published by In These Times on Sept. 7, 2021, and is shared here with permission.

Twenty years into a nebulous ​“War on Terror,” the United States is in the grips of a full-fledged climate crisis. Hurricane Ida, whose severity is a direct result of human-made climate change, flooded cities, cut off power to hundreds of thousands, killed at least 60 people, and left elderly people dying in their homes and in squalid evacuation facilities. This followed a summer of heat waves, wildfires and droughts—all forms of extreme weather that the Global South has borne the brunt of, but are now, undeniably, the new ​“normal” in the United States.

The US government has turned the whole globe into a potential battlefield, chasing some ill-defined danger ​“out there,” when, in reality, the danger is right here—and is partially of the US government’s own creation. Plotting out the connections between this open-ended war and the climate crisis is a grim exercise, but an important one. It’s critical to examine how the War on Terror not only took up all of the oxygen when we should have been engaged in all-out effort to curb emissions, but also made the climate crisis far worse, by foreclosing on other potential frameworks under which the United States could relate with the rest of the world. Such bitter lessons are not academic: There is still time to stave off the worst climate scenarios, a goal that, if attained, would likely save hundreds of millions of lives, and prevent entire countries from being swallowed into the sea.

One of the most obvious lessons is financial: We should have been putting every resource toward stopping climate disaster, rather than pouring public goods into the war effort. According to a recent report by the ​​National Priorities Project, which provides research about the federal budget, the United States has spent $21 trillion over the last 20 years on ​“foreign and domestic militarization.” Of that amount, $16 trillion went directly to the US military—including $7.2 trillion that went directly to military contracts. This figure also includes $732 billion for federal law enforcement, ​“because counterterrorism and border security are part of their core mission, and because the militarization of police and the proliferation of mass incarceration both owe much to the activities and influences of federal law enforcement.”

Of course, big government spending can be a very good thing if it goes toward genuine social goods. The price tag of the War on Terror is especially tragic when one considers what could have been done with this money instead, note the report’s authors, Lindsay Koshgarian, Ashik Siddique and Lorah Steichen. A sum of $1.7 trillion could eliminate all student debt, $200 billion could cover 10 years of free preschool for all three and four year olds in the country. And, crucially, $4.5 trillion could cover the full cost of decarbonizing the U.S. electric grid.

But huge military budgets are not only bad when they contrast with poor domestic spending on social goods—our bloated Pentagon should, first and foremost, be opposed because of the harm it does around the world, where it has roughly 800 military bases, and almost a quarter of a million troops permanently stationed in other countries. A new report from Brown University’s Costs of War Project estimates that between 897,000 and 929,000 people have been killed ​“directly in the violence of the US post‑9/​11 wars in Afghanistan, Pakistan, Iraq, Syria, Yemen, and elsewhere.” This number could be even higher. One estimate found that the US war on Iraq alone killed one million Iraqis.

Still, the financial cost of war is worth examining because it reveals something about the moral priorities of our society. Any genuine effort to curb the climate crisis will require a tremendous mobilization of resources—a public works program on a scale that, in the United States, is typically only reserved for war. Now, discussions of such expenditures can be a bit misleading, since the cost of doing nothing to curb climate change is limitless: When the entirety of our social fabric is at stake, it seems silly to debate dollars here or there. But this is exactly what proponents of climate action are forced to do in our political climate. As I reported in March 2020, presidential candidates in the 2020 Democratic primary were grilled about how they would pay for social programs, like a Green New Deal, but not about how they would pay for wars.

In June 2019, Rep. Alexandria Ocasio-Cortez (D‑NY) estimated that the Green New Deal would cost $10 trillion. Her critics on the Right came up with their own number of up to $93 trillion, a figure that was then used as a talking point to bludgeon any hopes of the proposal’s passage. But let’s suppose for a moment that this number, calculated by American Action Forum, were correct, and the price of a Green New Deal came to 4.43 times the cost of 20 years of the War on Terror? So what? Shouldn’t we be willing to devote far more resources to protecting life than to taking it? What could be more valuable than safeguarding humanity against an existential threat?

The reality is that warding off the worst-case scenario of climate change, which the latest IPCC report says is still possible, will require massive amounts of spending upfront. Not only do we have to stop fossil fuel extraction and shift to decarbonized energy, but we have to do so in a way that does not leave an entire generation of workers destitute. Several proposals for how to achieve this have been floated: a just transition for workers; a revamping of public transit and public housing; public ownership of energy industries for the purpose of immediately decarbonizing them; global reparations for the harm the United States has done. Any way you look at it, meaningful climate legislation will require a huge mobilization of public resources—one that beats back the power of capital. And of course, dismantling the carbon-intensive US military apparatus must be part of the equation.

In our society, it’s a given that we spend massive amounts of these public resources on military expansion year after year, with the National Defense Authorization Act regularly accounting for more than half of all discretionary federal spending (this year being no exception, despite President Biden’s promise to end ​“forever wars”). Over the past 20 years, the mobilization behind the War on Terror has been enabled by a massive propaganda effort. Think tanks financed by weapons contractors have filled cable and print media with ​“expert” commentators on the importance of open-ended war. Longstanding civilian suffering as a result post‑9/​11 US wars has been ignored. From abetting the Bush administration’s lies about weapons of mass destruction to the demonization of anti-war protesters as ​“terrorist” sympathizers, the organs of mass communication in this country have roundly fallen on the side of supporting the War on Terror, a dynamic that is in full evidence as media outlets move to discipline President Biden for actually ending the Afghanistan war.

What if a similar effort had been undertaken to educate the public about the need for dramatic climate action? Instead of falsehoods and selective moral outrage, we could have had sound, scientifically-based political education about the climate dangers that Exxon has known of for more than 40 years. We could have spent 20 years building the political will for social transformation. It may seem ridiculous to suggest that the war propaganda effort could have gone toward progressive ends: After all, the institutions responsible—corporate America, major media outlets, and bipartisan lawmakers—were incentivized against such a public service, and would never have undertaken similar efforts for progressive ends.

But this gets at something crucial—if difficult to quantify—about the harm done by 20 years of the War on Terror. The push for militarization has been used to shut down exactly the left-wing political ideas that are vitally needed to curb the climate crisis. As I argued in February 2020, US wars have repeatedly been used to justify a crackdown on left-wing movements. World War I saw passage of the Espionage Act, which was used to crack down on anti-war protesters and radical labor organizers. The Cold War was used as pretext for crackdowns on a whole host of domestic movements, from communist to socialist to Black Freedom, alongside US support for vicious anti-communist massacres around the world. The War on Terror was no different, used to justify passage of the PATRIOT Act, which was used to police and surveil countless protesters, including environmentalists. The Global Justice Movement was sounding the alarm about the climate crisis in the late 1990s, and was not only subjected to post‑9/​11 government repression, but was then forced to refocus on opposing George W. Bush’s global war effort.

The War on Terror also makes it nearly impossible to attain the kinds of global cooperation we need to address the climate crisis. It is difficult for countries to focus on making the transformations needed to curb climate change when they are focused on trying to survive U.S. bombings, invasions, meddling and sanctions. And it’s difficult to force the United States to reverse its disproportionate climate harms when perpetual war and confrontation is the primary American orientation toward much of the world, and the vast majority of US global cooperation is aimed at maintaining this footing.

Such grim reflections on the climate harms wrought by 20 years of the War on Terror do not amount to a nihilistic ​“I told you so.” We vitally need to apply these grisly lessons now, as the nebulous ​“War on Terror” is still being waged, from drone wars in Somalia to the bombing campaign against ISIS in Iraq and Syria. Meanwhile, while Biden claims to be ​“ending an era of major military operations to remake other countries,” he is overseeing an increasingly confrontational posture toward China, an approach championed by members of Congress in both parties. As dozens of environmental and social justice organizations noted in July, it is inconceivable that the world can curb the climate crisis without the cooperation of the United States (the biggest per-capita greenhouse gas emitter) and China (the biggest overall greenhouse gas emitter). Instead of militarizing the Asia-Pacific region to hedge against China, the United States could acknowledge this stark reality and launch an unprecedented effort for climate cooperation with China.

The possibilities for an alternative global orientation are both vast and difficult to know. What we do know is that the status quo of the War on Terror is not working. In addition to the hospitals the United States has bombed, the homes it has destroyed, the factories it has obliterated, and the people it has terrorized, the American military project has deeply worsened the climate crisis. And that crisis is now, undeniably, on our shores.