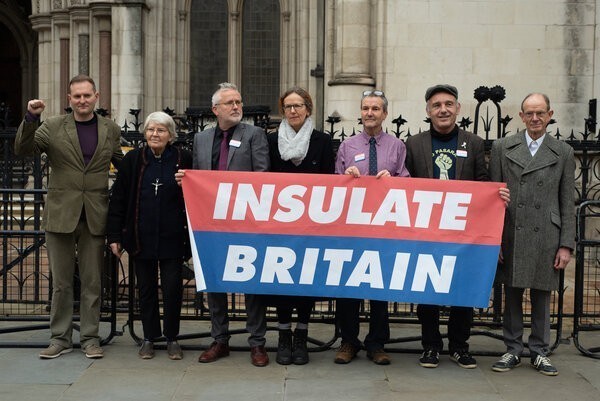 Insulate Britain activists outside the Royal Courts of Justice in London on Tuesday (Pic: Helena Smith)

The group, whose central demand is for the government to insulate all social housing by 2025, defied an injunction that banned them from blocking roads earlier this year.

Two of the nine activists were handed jail sentences of two months and 30 days. The other seven received two month suspended jail terms.

Dr Diana Warner, one of the two that will serve over two months, was unable to attend court. She was blocking a train headed to Drax power station in north Yorkshire.

In a statement Ruth Jarman, who was handed a suspended jail sentence, said,“I admit that I broke the injunction—it was a choice I made because I answer to a higher authority, that of love and life.

“I felt that not joining the Insulate Britain protests would make me a bystander to violence and complicit in the breakdown of abundant and civilised life.

“I am sorry for the impact of our protests on the people who were affected.

“I hate disrupting people and my actions were aiming to prevent the greater disruption of climate breakdown. So I do not regret breaking the injunction, and I cannot promise not to do it again.”

Emma Smart, who was sentenced to four months in jail earlier this year, staged a 26-day hunger strike while inside.

Speaking after the ordeal, she said, “I have ended my hunger strike after 26 days, one day for every failed Cop meeting since the UN Framework Convention on Climate Change was signed.

“I remain proud of my actions with Insulate Britain and will continue to do all that I can to pressure our government to live up to its duty to protect the people from climate collapse.”

Socialists must stand in full solidarity with Insulate Britain in the face of state repression and imprisonment.

It is right to take militant and direct action to defend the planet, but protests will be more effective if they are larger and draw in a wider layer of activists.

Building a larger movement is essential, especially with the Tories’ Police, Crime, Sentencing and Courts Bill currently going through the House of Lords.

The bill will mean the state can hand out harsher sentences to protesters and even stop them from attending—or else face a prison sentence.

And new amendments blocking tactics used by Insulate Britain in the wake of its protests have been added.

A mass movement is needed to kill the Tories’ bill and defend the planet from climate destruction.

Closed trial of Statkevich and other political prisoners resumes in jail