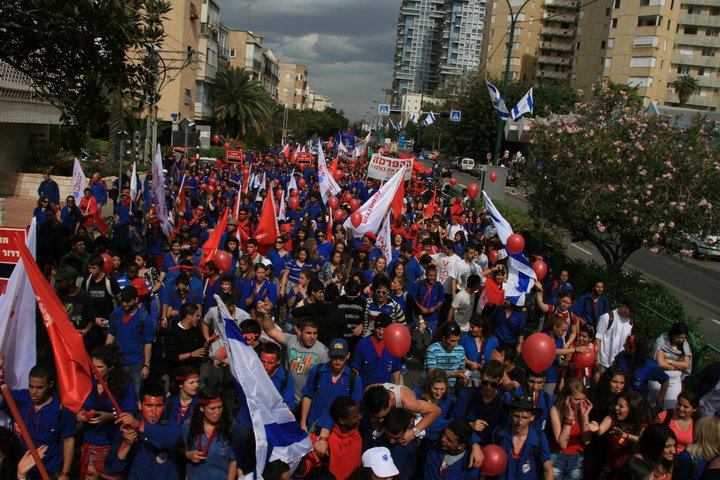 Unison’s rejection of formal bilateral relations with the Histadrut shouldn’t have prevented a solidarity message from being sent to the rank-and-file hospital workers. But apart from that, is the union right to be boycotting the Histadrut?

In 2009, a Unison national delegate conference decided that Unison’s link with the Histadrut – then in existence – should be reviewed. A delegation went to Israel-Palestine in November 2010 for that purpose and returned with a recommendation to maintain the link. One of its reasons was that the largest Palestinian trade union federation in the occupied territories, the Palestine General Federation of Trade Unions (PGFTU), had urged that the link with the Histadrut be maintained, to help apply pressure against the occupation. However, Unison’s June 2010 conference had already passed a motion to suspend relations with the Histadrut and that decision was reaffirmed at its 2012 conference.

The spur behind the 2010 motion to suspend the link was a Histadrut leadership statement which tried to justify an Israeli military attack on a ‘Gaza freedom flotilla’ boat that had been taking aid to Gaza. Nine activists were killed in that atrocity. That was just one of many episodes over decades of the Histadrut leaders supporting brutal military actions ordered by the Israeli government, arguing that they were ‘no choice’ retaliatory operations.

Strongly condemning that position has always been necessary and workers’ organisations everywhere must give no support to those leaders. But breaking relations with the Histadrut means cutting off a channel towards reaching the hundreds of thousands of rank-and-file members of that federation who have the power to change its leadership and the positions taken. Pivotal statements issued by the Histadrut’s leaders have not been democratically discussed and agreed by its members, they come from those at the top who have close links with the capitalist establishment.

The PGFTU itself has a formal link with the Histadrut, to encourage workers’ solidarity across the national divide and to lean on the Histadrut to use its weight to negotiate measures in the interests of Palestinian workers. Yet within Unison that link hasn’t always been made clear. The 2018 Unison Scotland conference, before passing a motion in support of boycotting of the Histadrut, circulated a statement backing that call which is described on the Scottish Unison website as “from Palestinian trade unions”. However, the four Palestinian trade union bodies that signed the statement didn’t include the PGFTU, the main union federation in the occupied territories. The first signatory of the four was the General Union of Palestinian Workers, a federation based on the Palestinian diaspora and not the West Bank and Gaza.

The Histadrut (General Federation of Workers in Israel) was formed in 1920 to organise Jewish workers’ labour in Palestine and aid Jewish settlement. Initially it was based on local workers’ committees but from 1921 it was transformed – under the leadership of David Ben-Gurion – into a centralised institution. The Zionist leaders used collectivist and centralist ideology to garner Jewish workers’ support for their aim of developing a modern capitalist economy using ‘Jewish labour’. The Histadrut played a major role in this – in service provision and in developing and running enterprises. In the early stages this was partly to try to prevent Jewish-owned companies from employing Arab labour, which cost them less than Jewish immigrant labour, and to deter Jewish people from buying Arab produce.

After the formation of the state of Israel in 1948 the Histadrut continued to play a considerable role in the economy alongside governments run by the Israeli Labour Party and its predecessors. Its role had a hybrid character, combining elements of trade unionism with owning and controlling about a third of the economy.

That changed in the 1980s and 1990s; lower economic growth rates and neoliberal government policies led the Histadrut to sell off most of its companies. It maintained though its role of representing workers and set up workers’ committees to develop more of a trade union-based structure.

Originally a Jewish-only organisation, in 1959 it started admitting Palestinian residents of Israel, and from 2009 migrant workers could join. Today its 800,000 members are in 28 trade unions, encompassing over 80% of the trade union members in Israel.

For Israeli workers the Histadrut’s existence is clearly important, as the main vehicle through which they have obtained basic rights, including collective bargaining. But in industrial relations with the employers its leadership is pro-capitalist, bureaucratic and willing to sign deals that are a form of ‘partnership’ with the capitalist or state bosses rather than fighting resolutely for workers’ interests. Those rotten characteristics can be seen in the leaderships of most union federations today.

Among the first acts of Israel’s recently formed new government have been plans for a public sector wage freeze and other attacks on living standards. While going through the motions of criticising this, Histadrut chairman Arnon Bar-David has at the same time been preparing the ground to concede without a struggle, or just to extract some concessions in return.

This is not to say that the Histadrut leaders don’t regularly have to respond to pressure from below by organising sectoral or workplace industrial action. It is also not unusual for them to threaten a general strike – as they did in 2018 over construction site safety and in 2020 against pay cuts for workers who had to isolate due to Covid-19.

In 2012 they organised a general strike which lasted five days in a fight for casual workers to have the same pay and conditions as directly employed workers. That struggle came not long after they had felt compelled to express support for the massive 2011 protest movement in Israel, which began on the housing crisis but grew to encompass many issues. They organised a rally under the slogan “workers are with the protest”, with trade unionists from some of the country’s largest companies participating.

The Histadrut’s origin and history alone is pointed to by some as a reason for a boycott. But it is certainly not the only trade union internationally that has a racist or reactionary origin. For example, Force Ouvrière in France began as a 1948 right-wing split from the then Communist Party-led CGT, and had funds channelled to it from the CIA. Today FO is the third biggest union confederation in France and has recently campaigned against Macron alongside the CGT.

Support for military aggression is also far from unprecedented in workers’ organisations internationally. In the US in May 1965, as a dramatic increase in US ground forces in Vietnam was being prepared, AFL-CIO union federation president George Meany declared that the AFL-CIO would support the war.

Unison didn’t support the invasion of Iraq in 2003. But at the same time its leaders didn’t advocate that action be taken by the union’s one million plus members against that war – mobilisation that could have forced the government to retreat. That was a Labour government that was playing a central role in the invasion and occupation, killing hundreds of thousands of Iraqi people. However, Unison’s leaders didn’t even propose any reduction in the money being paid from the union’s ‘affiliated political fund’ to the Labour Party while it was prosecuting the war.

For Trotsky the key issue was how to reach the millions of workers in the trade unions with socialist ideas. He condemned any left organisation that “in essence turns its back upon the working class, merely because of displeasure with its organisations”.

Trotsky’s call for workers to fight for trade unions to be both independent and democratic is very valid for the Histadrut today and for a great many other union federations globally – including for the PGFTU, which also has a bureaucratic, pro-capitalist leadership. A key task for workers in Israel-Palestine is building left forces within their unions that can challenge for leadership positions with a programme of transforming them. Rejection of links with the Histadrut by some trade unions internationally doesn’t help with that task, the more so because many capitalist commentators in Israel paint it as anti-Semitic and use it to boost right-wing nationalism.

Unison’s 2012 conference, while reaffirming suspension of relations with the Histadrut, agreed to “strengthen cooperation with the new trade unions and non-governmental organisations (NGOs) in Israel who oppose the occupation and seek to organise Palestinian and migrant workers”.

The Histadrut formally calls for a two-states solution (a Palestinian state alongside Israel), albeit on a capitalist basis, and it does organise Palestinian and migrant workers. But leaving that aside, there are smaller and sectoral trade union organisations in Israel with leaderships that are politically to the left of the Histadrut leadership and with more combative industrial stances. For example, ‘Power to the Workers’ was set up in 2007 as a union that would be democratically run and have a fighting approach. Today it has 18,000 members, a third of them Palestinian.

While the above quote shows that Unison’s 2012 conference didn’t reject having links with some Israeli workers’ organisations, it is not uncommon for advocates of boycotting the Histadrut to tend towards writing off the Israeli Jewish working class as having the potential to move to challenge and remove Israeli capitalism, and to aid the Palestinians’ struggle for self-determination.

This approach has no appeal to the Histadrut members and leaves their leadership unchallenged. It stems from the belief that Israeli Jewish workers will always put loyalty to ‘Israel’ first. But this issue needs to be looked at in class terms. The question is: which ‘Israel’? The Israel of the Israeli ruling class, or the Israel of the working class and overwhelming majority.

The nationalist promotion by the Israeli ruling class of Israel needing to defend itself as the only country where Jewish people can live together in their own state, free of antisemitism, is heavily used to try to draw the Israeli working class and middle class behind the interests of the capitalists who own and control the top corporations. In the absence of a workers’ party that can put forward a programme in workers’ interests, no alternative is presented.

The Israeli ruling class will not solve these burning issues. Within its first two months in office, the new government – which promised ‘change’ – faced protests by health workers, disabled people and others against its budget proposals. Nor does the ruling class or any of its governments have a solution to the national conflict and cycles of war.

Israeli workers face the necessary task of building their own political party, which will head towards the conclusion that if capitalism can’t offer a decent future, a socialist transformation will be necessary. That process, along with the Palestinians in the West Bank and Gaza moving in the future against the pro-capitalist Palestinian leaders, will open the way for cooperation and solidarity between workers on both sides of the national divide, who will have no interest in repression, exploitation or racism.