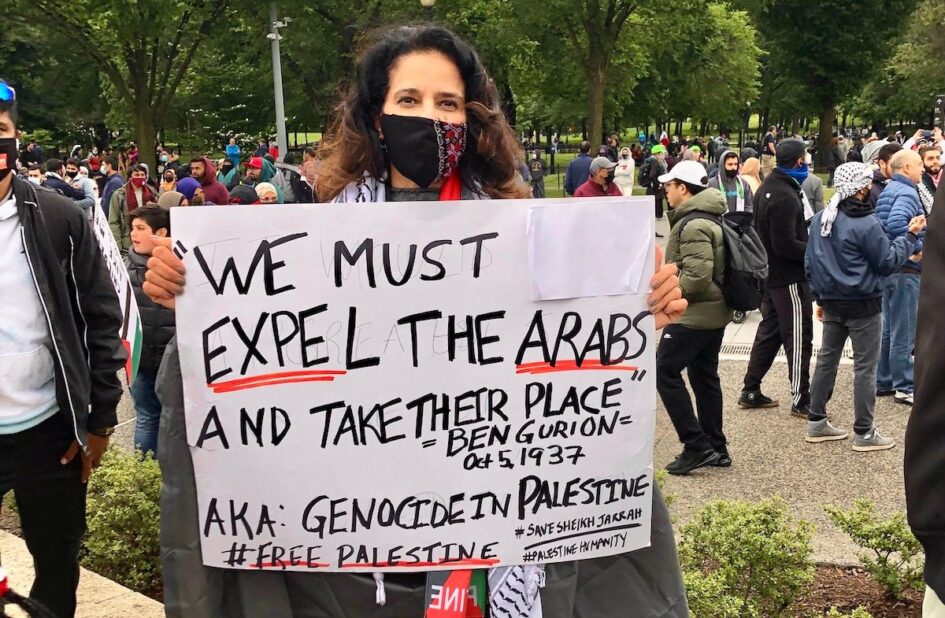 Israel reinstated a ban on Palestinian family unification March 11 in an explicit attempt to ensure a Jewish demographic majority. The ban means that Palestinian citizens of Israel cannot pass on citizenship or even residency to spouses or family from the West Bank or Gaza.

Also to ensure a Jewish majority, Israel is making a concerted effort to relocate Ukrainian Jewish refugees to Israel where they would have full Israeli citizenship. Funds from the government and partner organizations have been used to set up six stations along the Ukrainian border to process immigration applications for Jewish refugees only in a program called “Operation Israeli Guarantees.” The motivation for this is not to assist the victims of war, it is to transform them into settlers and colonizers and weaponize them against the Palestinian people.

Racist law applies only to Palestinians

The law renewed on March 11 prohibiting Palestinian family immigration has been reenacted 21 times since its introduction in 2003. This year, a restriction was added on citizenship or residency for those from “hostile countries or from the region.” This specifically targets unification between residents or citizens and spouses from Syria, Lebanon, Iraq, and Iran.

This law denying citizenship applies only to Palestinians. Under Israel’s 1950 Law of Return, all non-Israeli Jews and Gentile converts to Judaism are entitled to settle in Israel and receive full Israeli citizenship.

Israeli officials have been very transparent with the reasons behind the ban. Israel’s Interior Minister Ayelet Shaked said that the legislation is intended to prevent Palestinians from gradually returning to their homeland.

Adalah, the Legal Center for Arab Minority Rights in Israel, is plans to challenge the racist and discriminatory law in Israel’s Supreme Court. The law has been criticized by several UN human rights bodies that have urged Israel to allow for family unification for all citizens and permanent residents. They point out that the ban violates international law as it is a clear feature of the apartheid regime.

Human Rights Watch’s recent report on Israeli Apartheid and Persecution includes a section critical of the law featuring this 2005 quote by then-Finance Minister Benjamin Netanyahu: “Instead of making it easier for Palestinians who want to get citizenship, we should make the process much more difficult, in order to guarantee Israel’s security and a Jewish majority in Israel.”

Despite the glaring human rights abuses of the apartheid state, Nancy Pelosi, Speaker of the U.S. House of Representatives, and seven other Democrats, recently wrapped up totally uncritical visit to that state. Pelosi addressed the Israeli Parliament on Feb. 16, calling the creation of Israel the “greatest political achievement of the 20th century” and stressing the “ironclad” nature of Washington’s support of the racist regime.

More recently, U.S. lawmakers on both sides of the aisle have showcased their bi-partisan hypocrisy through their selective outrage at attacks on civilians in the Ukraine. While Washington cannot bring itself to condemn Israeli apartheid, nor its violent eviction of Palestinians in Sheikh Jarrah and murder of innocent children, it is quick to highlight the plight of Ukraine civilians under Russian bombardment and to place sanctions on Russia. Pelosi, for example, was quick to call out Russian President Vadimir Putin’s “attack on democracy” and “violation of international law, global peace and security” all while whitewashing Israeli genocide.

The mainstream narrative around Ukraine is full of virulent racism and xenophobia in the way that refugees from European countries are perceived and treated in comparison to those coming from the global south. News anchors, politicians and others support the refugees  because Ukrainians are “civilized,”  or “blonde haired and blue eyed” or “Christian,” or because “they seem so like us. Ukraine is a European country. Its people watch Netflix and have Instagram accounts.”  Notably, people in Ukraine who don’t fit this narrative and are attempting to flee the country are getting stuck at the border while white citizens of Ukraine receive passage.

Resistance is also applauded as brave and heroic in Ukraine, and civilians preparing Molotov cocktails have been glorified in the establishment media. Meanwhile, Palestinian resistance, results in jail time or death, is villified or ignored. Ironically, several of the images supposedly coming out of Ukraine are actually from Palestine, including a well-known video of Palestinian teenager Ahed Tamimi confronting an Israeli soldier. It was recently circulated on Twitter with the false description: “brave little girl confronts Putin’s Army.” Tamimi spent eight months in Israeli prison for her resistance.

In a move of demographic engineering, Israel is offering to resettle Jewish refugees from Ukraine as part of a strategic policy to ensure Jewish demographic superiority over Palestinians. “This is not a humanitarian act that Israel is carrying out. Israel is a settler-colonial state. It is a state that is obsessed with demography and ensuring demographic superiority by Jewish people over Palestinians,” said Lana Tatour, professor of settler-colonialism and human rights at the University of New South Wales in Sydney, in an interview with Aljazeera.

Putin’s War in Ukraine and the Refugee Crisis