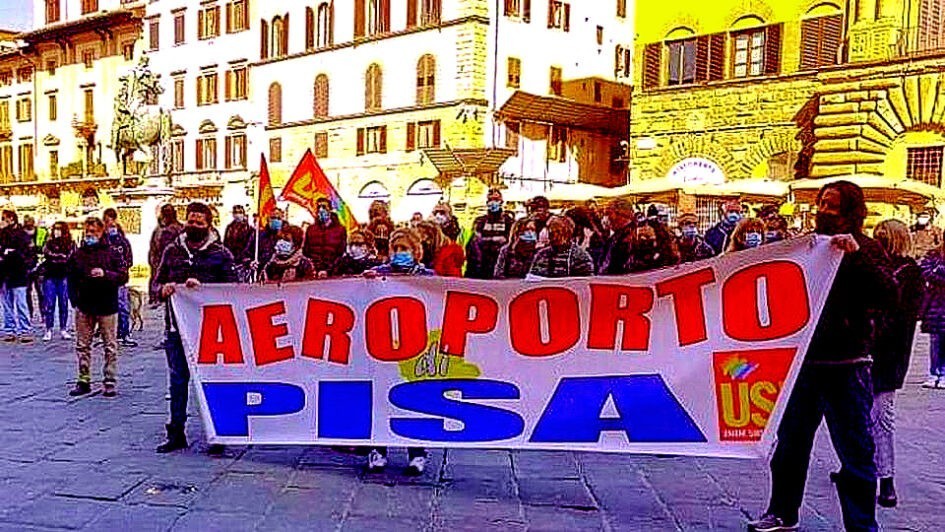 Workers at the Galileo Galilei Airport in Pisa — a civilian airport — reported March 12 that they had been involved in the loading of a cargo plane with what was alleged to be humanitarian aid destined for Ukraine. The aid turned out to be arms and ammunition destined for the troops of the Zelensky regime. 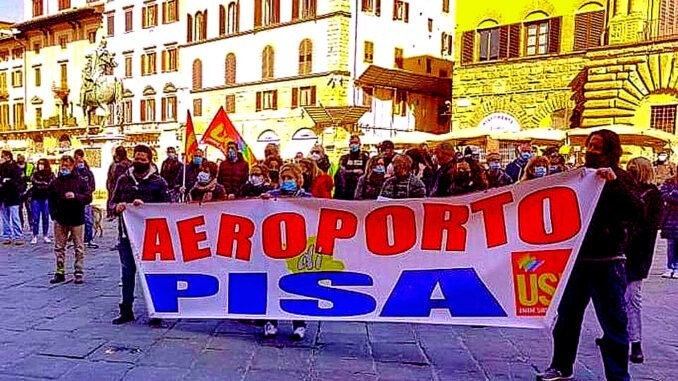 In Italy a rally supports workers in the rank-and-file Unione Sindacale di Base who refused to load weapons at the Pisa Airport, disguised as humanitarian aid. A USB statement said: ‘We strongly denounce this real fraud, which cynically uses the ‘humanitarian’ cover to continue to fuel the war in Ukraine.’

Having learned the real content of the shipment, the workers refused to complete the loading operations and informed their rank and file union, Unione Sindacale di Base (USB), which publicly denounced the incident.

“From the Cargo Village located at the civilian airport, ‘humanitarian’ flights take off. These are supposed to be filled with food, provisions, medicines and anything else useful for the Ukrainian people tormented by weeks of bombing and fighting. But it’s not like that: When they showed up under the plane, the workers in charge of loading were faced with boxes full of various types of weapons, ammunition, explosives,” says the USB statement. And further: “We strongly denounce this real fraud, which cynically uses the ‘humanitarian’ cover to continue to fuel the war in Ukraine.”

The Italian government is on the front line in the proxy war fought on Ukrainian territory by the Russian army against the troops of the Zelensky government, which had been armed, trained and financed for almost a decade by the U.S. and NATO.

Italy’s role has reached the point where the country is being increasingly excluded from the initiatives of the French-German axis that leads the European Union. These initiatives have aimed at trying to stem the crisis, recently materialized in a high-level discussion among French President Emmanuel Macron (EU president), German Chancellor [Olaf] Scholz and Chinese President Xi Jinping.

Media propaganda has pounded away, pushing an increasingly active Italian commitment in support of the Ukraine regime in Kiev. Leaders of Italy’s executive, headed by Prime Minister Mario Draghi, have ranted against Moscow. 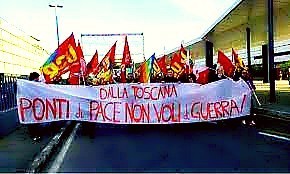 People protest in Pisa, Italy, March 19 against the Italian government’s decision to send weapons to Ukraine’s government under the guise of humanitarian cargo. Banner reads ‘From Tuscany, bridges of peace, not flights of war!’

The country is being led by the hand to a paroxysm of Russophobia completely alien to its traditions and to the common sense of the population.

An impressive barrage of distorted information, hypocritical rhetoric on human rights and anathema to unified networks against the execrable demon of “pacifism” is lavished to legitimize sending weapons to the war theater. Doing this is a dangerous step towards generalizing and worsening a crisis that threatens to drag the continent and the whole world into the abyss.

The episode at Pisa airport shows that the attempt to impose pro-war sentiments on the Italian people is meeting resistance, despite the concerted effort almost all parties represented in Parliament have been making. In recent weeks, the media has conducted a lynching against the main Italian trade union, the Italian General Confederation of Labor (CGIL) and against the National Association of Partisans of Italy (ANPI).

The ANPI is “guilty,” along with many other popular organizations, of refusing to conform to the single voice of war propaganda. While they oppose the “special military operation” ordered by Putin, they also oppose sending weapons to the Ukrainian army and, in the case of ANPI, against the expansion of NATO to the east.

GKN dispute in Florence – Italian workers are fighting back

The Italian resistance to fascism