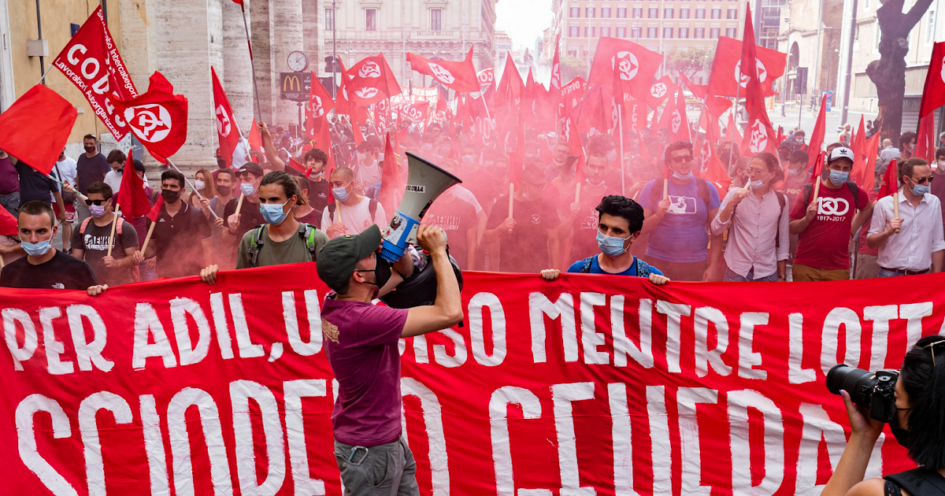 In a statement the Italian USB Trade Union (Unione Sindacale di Base), jointly with other class oriented trade unions and workers’ association, has proclaimed a General Strike, for both public and private sector, throughout the country on October 11th.

The Draghi government has literally removed from the economic recovery plan of the country the interests of Italian workers. With the complicit support of CGIL, CISL and UIL, the layoffs have been unlocked, starting a wave of redundancies, relocations and heavy restructuring throughout the private sector.

A crisis with dramatic contours to which is added the paradox of the loss of employment at a time when companies have been allocated almost all the substantial resources of the “PNRR”, the plan for the economic recovery of the country.

For workers, the only resources made available are those of social shock absorbers and, in the meantime, this is compounded by the hateful and heavy increase in electricity and gas bills, which is cutting salaries and pensions.

With the Alitalia dispute, this government, the perfect expression of the European strong powers, is opening the way for the entire employers: 8000 redundancies, cancellation of the national contract, dramatic reduction of labor costs and wages, and all this by a company, ITA, with total public capital. A line confessed during the Confindustria assembly, which gave him a “standing ovation”.

To these wicked policies is added the greatest weapon of mass distraction of this government: the GREEN-PASS. At the urging of the Italian employers, they have chosen the path of “living with the virus”, applying rules that have nothing to do with safety and health in the workplace.

Of the 270 billion euros made available by the NextGeneration-EU plan, only 22 are allocated to healthcare, placed in last place of the investments indicated by the PNRR.   In a framework where it would have been necessary to address the issue of investment in public health, research, strengthening of basic medicine, recruitment and stabilization of medical and paramedical staff, a campaign of testing and tracking worthy of the name, the Green Pass today is just a fig leaf that deresponsibilizes the institutions and testifies to the failure of the state in the management of the pandemic.

The government of the masters only cares about the maximum recovery of economic activities and profits. There is no other reason to guide it and move its interests.