‘It’s going to be a nightmare’: Grueling holiday conditions on the horizon for airport workers 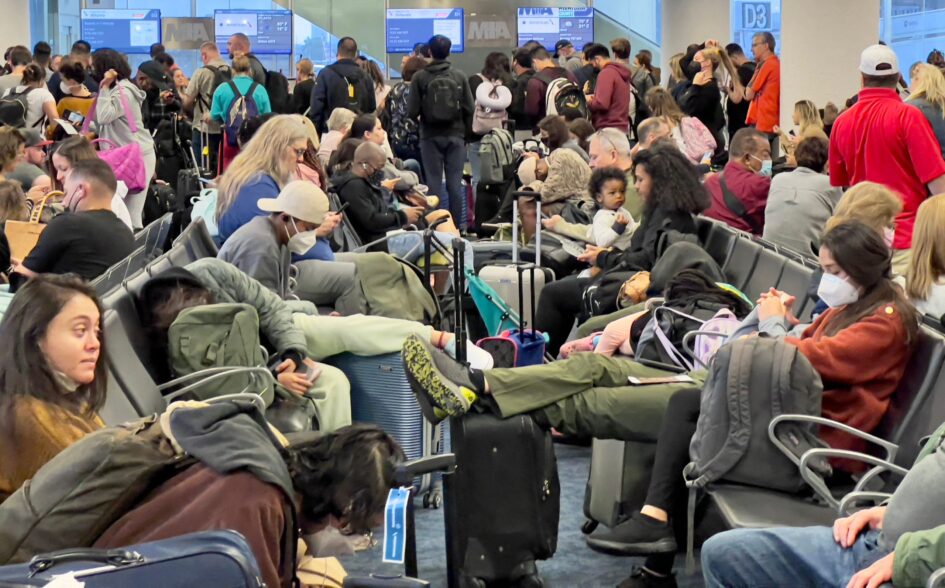 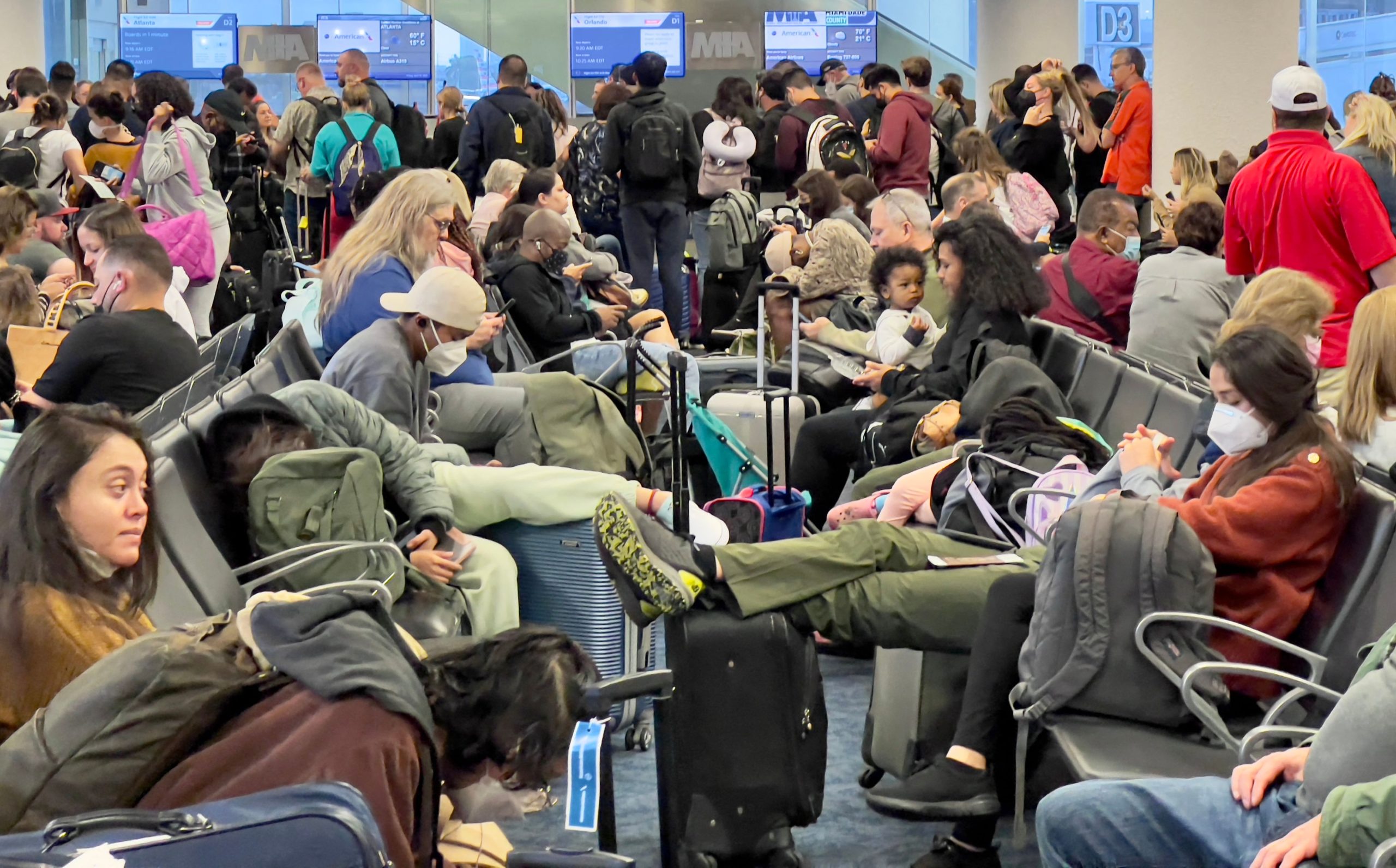 Every year, the media churns out countless headlines on holiday travel surges, operational issues, delays, and lost bags, while ignoring low paid and understaffed workers at airports around the United States. Starting Thanksgiving week, airports are flooded with a holiday surge in passengers, with air travel this season projected to be around 99% of pre-pandemic levels.

Bearing the brunt of the holiday travel demands are airport workers who are now expected to handle this surge despite severe understaffing and low pay in the wake of the COVID-19 pandemic. Many were initially laid off or furloughed at the onset of the pandemic, which added considerable stress to the overwhelmed workforce.

While airlines have returned to relative normalcy, reporting millions of dollars in profits and increased air travel demand, workers report being unable to afford their basic living necessities on the wages they are paid. Additionally, an overwhelming number of these workers are not provided affordable health insurance coverage or paid time off.

Verna Montalvo, a cabin cleaner at Dallas/Fort Worth International Airport, works for a contractor cleaning airplanes in between landings and takeoffs. She spoke at the introduction of the Good Jobs for Good Airports Act in Congress earlier this year.

She and her coworkers are constantly rushed and often aren’t provided enough time to clean the airplanes properly or fully. They don’t get paid any extra for working on holidays and are often understaffed, with turnover high because of the low pay and poor working conditions.

“You have to work holidays and don’t have time to spend with your families. A lot of workers work double shifts because they need the money. It’s going to be a nightmare during the holidays,” said Montalvo. “I get home very, very tired and worn out. Sometimes we get breaks, sometimes we don’t. If we do get breaks, it’s ten minutes, and right back again. Sometimes, we miss lunch because we’re short of people.”

She has been trying to organize her coworkers to push for better wages, benefits, and working conditions, though employers have intimidated workers from unionizing.

Montalvo is paid just $12.50 an hour without any additional benefits. The low pay often forces workers to try to work as many shifts as they can, to the point where they are basically living in the airport and can’t afford to take a day off even if they are sick. Losing even one day’s income is too much for workers to sacrifice, especially as the cost of rent, bills, and basic necessities have soared over the past year.

Workers report that many of their break rooms don’t have tables and chairs or basic amenities like a refrigerator or a microwave, and some even have cockroach infestations. “They have to sit on the floor with their food on their lap,” Montalvo said. “[The airlines] need us. We are making the business for them. They are making millions of dollars and putting it in their pockets. That money belongs to us. They can support us. They have the money to give us not what we want, but what we need.”

The Good Jobs for Good Airports Act was introduced in Congress in 2022 to mandate a minimum wage of at least $15 an hour for all airports that received federal funding. The legislation has yet to leave committee for a vote in the House or Senate, leaving workers frustrated.

Khaled Habli, a lead cabin cleaner at George Bush Intercontinental Airport in Houston, Texas, has been pushing elected officials to support the legislation and address the issues facing airport workers around the US. He now makes around $18 an hour—a result of fighting alongside his coworkers to win a higher wage—but it still isn’t enough to support his family.  He’s often tasked with cleaning planes without enough workers to do so in the time they’re given.

“We are always understaffed. We experience a lot of short staffing and have to do mandatory overtime. Every year during the holidays we barely get time to spend with our family,” said Habli. “We are not paid enough to support our family. Wages have barely moved in 20 years, but the profits of the airlines keep going up,” he continued. “During the pandemic, airlines and subcontractors received money in COVID relief, but we didn’t see any benefits to us in raising wages. We get paid almost minimum wage and we don’t get sick days or vacation.”

He explained the cleaning equipment they are given to clean the planes is often old and defective. The vans they have to drive around between planes often have a lot of mechanical problems, no air conditioning in the summer, and no heat in the winter.

“We’re not treated with respect by the companies we work for,” he added. “We have been told that we are essential workers through the past few years since the pandemic, but really we’re treated like we are disposable.”

On Dec. 8, airport workers are planning to picket and hold rallies at 15 major US airports, including Boston, Chicago, Dallas, New York, Newark, Phoenix, and Seattle, to call attention to the need for better pay and benefits and to support passage of the Good Jobs for Good Airports Act.

“Airport service workers are vital to keeping our world connected, our airports running, and passengers safe. For nearly three years they’ve sacrificed their health as essential workers, only to be treated as anything but,” said Mary Kay Henry, president of Service Employees International Union (SEIU), in a statement. “Now, airport workers are seizing their power alongside working people across the economy — from Starbucks to Amazon, fast-food to home care and beyond — to demand more from their employers and elected officials. Congress must back their demands and pass the Good Jobs for Good Airports Act, ensuring every airport worker across race, background, and ZIP code can build a brighter future for their family.”

Cuban Leader: Our Horizon Continues to be Socialist

‘The Nightmare of Future Wars – Workers of the World Unite!’Soviet School, 1920s. Via Organize,…

Support The Socialists This Holiday Season!