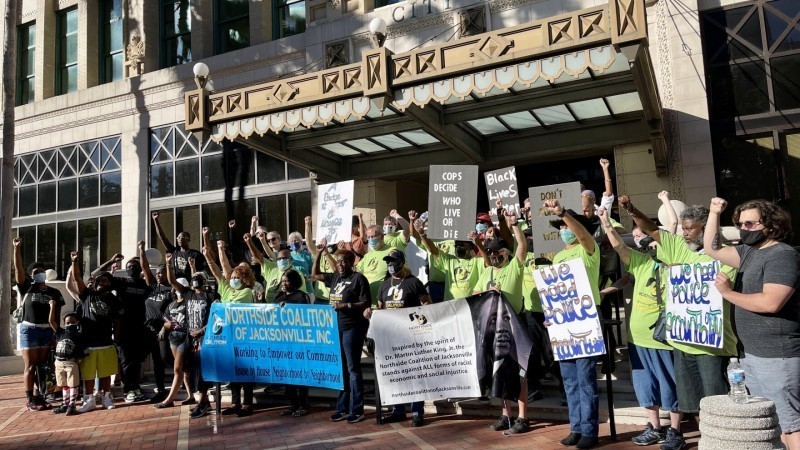 Jacksonville, FL – Around 50 community members came together outside of City Hall, October 26, to rally for the re-instatement of the “Safer Together Committee” by the City Council. The rally was led by the Jacksonville Community Action Committee (JCAC) and joined by the Northside Coalition of Jacksonville, Students for A Democratic Society, Take Em Down Jax, Florida Rising, and Women’s March Jacksonville.

The rally began at 4 p.m. with the crowd chanting “People! Power!” while various news stations set up to collect footage of the event. Michael Sampson, a leader of JCAC, kicked off the rally by demanding that the city council reinstate the Safer Together Committee in order to continue the work that the people started in 2020, when tens of thousands marched downtown in the wake of brutal police violence. Sampson stated, “The Safer Together Committee was created after the people demanded police accountability.”

​The Safer Together Committee was launched by late Councilmember Tommy Hazouri, in order to address the lack of trust and accountability from the Jacksonville Sherriff’s Office (JSO) after tens of thousands took to the streets, led by the JCAC and its allies. Among other recommendations, a citizen’s review board was proposed in order to increase some community involvement throughout JSO internal investigations. The meetings culminated with a report done by Doctors Tammy Hodo and Brian Van Brunt that delineated the various ways that JSO exacerbated the lack of trust and accountability to the community of Jacksonville.

Councilmember Michael Boylan suddenly resigned after pressure from JSO Sheriff Mike Williams and the Fraternal Order of Police (FOP), the police union that has fought against any police accountability measures. Council President Sam Newby, also pressured by JSO and the FOP, later moved to end the Safer Together Committee.

Immediately after Boylan’s resignation, community members sent a letter to Council President Sam Newby demanding the reinstatement of the committee. The letter was signed by 15 organizations as well as State Representative Angie Nixon and the president of the local NAACP chapter, Isaiah Rumlin.

After the rally, the crowd moved inside council chambers to make public comment in support of reinstating the Safer Together Committee in order to continue the path towards community control of the police.

Monica Gold, an organizer with JCAC, stated that it was “interesting that even a small semblance of transparency and accountability made city council so uncomfortable”. During the rally, JCAC leader Christina Kittle asked the crowd who city council was protecting with this rash decision to end the well-supported Safer Together Committee. She answered her own question with, “they are protecting the campaign donations they receive from the Fraternal Order of the Police.”

​The Jacksonville Community Action Committee will continue to demand reinstatement of the Safer Together Committee as part of their organizing efforts for community control of the police in Jacksonville and across the nation.

The Anti-War Committee Joins Groups Around the Globe to #StandWithThe6