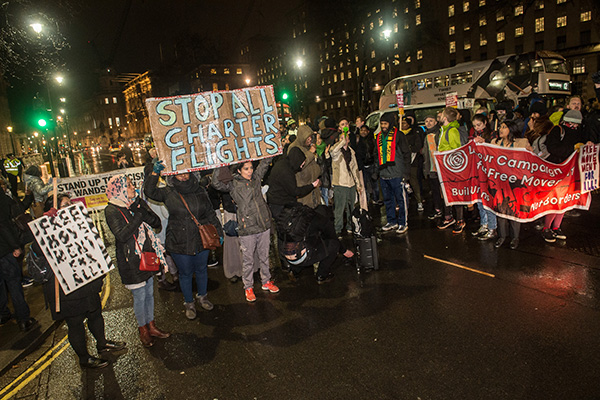 A protest against a charter flight to Jamaica at the start of 2020 (Pic: Guy Smallman)

In another sign of the Tories’ racist assault, they pushed ahead with a deportation flight to Jamaica in the face of coronavirus fears and legal challenges.

The Home Office deported seven people to Jamaica in the early hours of Wednesday.

It had rounded up 90 people for deportation and the flight held a capacity of 50. But two positive coronavirus cases were confirmed in the detention centre, forcing many to self-isolate.

Two men who had arrived in Britain as children tried to kill themselves before the flight and were rushed to hospital.

Legal challenges to the High Court in the days and hours before the flight blocked some of the deportations.

The Home Office made an agreement with the Jamaican high commission last November to not remove people who came to Britain under the age of 12.

But ministers seemingly ignored it.

Sanjay McLean managed to secure a stay of execution in an out-of-hours court hearing, but the Home Office appealed in an attempt to get him on the plane.

He moved to Britain aged 12 and said as he waited at London Stansted airport for the judge’s decision following the appeal. “I’m not in a good place. Sanjay added, “I thought a weight was lifted off my shoulder, and now they’re doing this again. I’m an emotional wreck right now.”

Wamos Air, which flew the deportation flight, became the latest company to profit from Britain’s immigration system of detention and deportations.

Zita Holbourne from Black Activists Rising against Cuts UK (Barac) slammed the Home Office as having “no regard for people’s conditions”. “They don’t care, they dehumanise people on the basis that they’re foreign national criminals,” she told Socialist Worker.

She says the small number of people able to be deported “exposes the government and demonstrates they weren’t people who should be targeted in the first place”.

“But they still took seven people, and ripped them from the only home they know and tore them apart from their family,” Zita said. “They don’t know what their fate is going to be when they arrive in Jamaica.”

Zita says that racist lies pushed by the Tories lie behind the deportations. “They’re now branding everyone as hardened criminals, guilty of the worst possible crimes saying they’re all murderers and rapists,” she said.

“The majority have drug and driving offences. If you were born in Britain, you’d be able to serve time and be punished, then go and live your life. But these people are facing double and triple punishments.”

Stand Up To Racism said, “The whole intention of these deportations is to pander to racism by painting communities as criminal and being seen to be ‘tough’ on them.”

Police and state racism means black people are more likely to be stopped and searched—and to receive harsher sentences.

“So they’re more likely to end up in the system in the first place,” Zita said. “They’re branded foreign national criminals—even people who are children or grandchildren of the Windrush generation.

“They’re here because of immediate family connections, or a history of colonialism and the British empire.

“Yet they’re not seen as British.”

Anti-racists have to fight to stop all the flights—and tear down Britain’s racist immigration system.