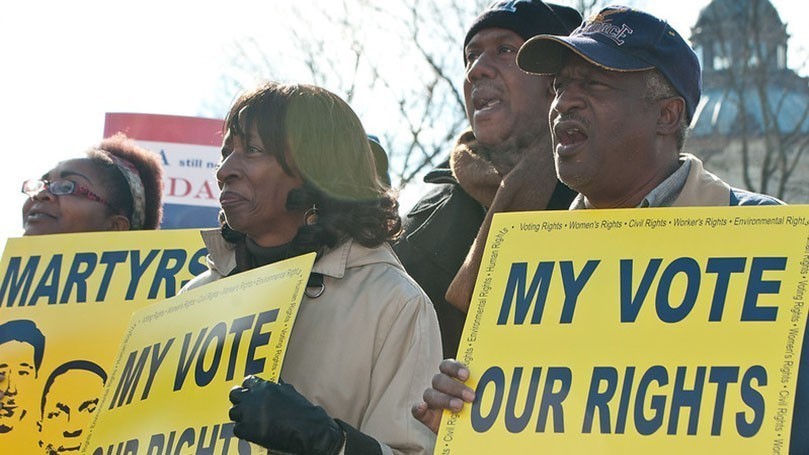 The January 6th rioters at the U.S. Capitol attempted to overturn the November election and restore Donald Trump to power. This collection of everyday Republican Party activists were members of white supremacist organizations such as the Proud Boys and Oathkeepers. The mob included off-duty police and military members, small business owners, and a grab-bag of conspiracy theorists associated with Q-anon and anti-vaccination groups and religious fundamentalists.

Angry that the majority of U.S. voters ended the dysfunctional rule of the Trump administration, they sought to help him frog-march the U.S. toward fascism.

That day’s events were triggered by Trump’s relentless campaign against the legitimacy of the November election, a predictable tactic in coup attempts. In his book Washington Bullets, author Vijay Prashad shows how the script works: coup plotters denounce the election and rile up their supporters to promote violence, provoking a military response to install the “strong man” to restore order. Media reports show that U.S. military officials feared that Trump aimed for this outcome and fought to limit military involvement toward this end.

That is how close we came to the installation of a fascist regime in this country.

The terroristic events of Jan. 6th were fueled by a culture of conspiracy that dominates the Republican Party. Republican Party boss Donald Trump didn’t invent this culture of conspiracy, but he did exploit and transform it into a daily, relentless mantra. The original conspiracy theory deployed frequently by Republican Party activists, donors, and media personalities typically centered on Black control of the Democratic Party and its use of guilt and radicalism to undermine white supremacy. Conspiracy-style politics infused with racial hatred made Rush Limbaugh, Pat Buchanan, and Ann Coulter rich in the 1990s. This conspiracy theory has been at the heart of GOP attacks on affirmative action, school desegregation, and voting rights since the 1970s.

Donald Trump has always been a promoter of racial conspiracy and racist policy. He launched his campaign for president with manufactured racist claims about Obama’s phony birth certificate but was too afraid of actually competing with Obama in 2012. His 2016 campaign demonstrated his effective ability to trumpet racist and sexist politics to his mass base, which made him a perfect fit for the Republican Party nomination.

He propelled these once-marginal claims into the daily reality of tens of millions of Americans, fashioning a new and dangerous political terrain.

In his book, How Fascism Works, Yale philosopher Jason Stanley argues that the systematic linkage of victimhood rooted in racial theories and xenophobia, the methodical attacks on intellectuals and scientific thought, the aggressive appeal to law and order and to the hierarchical power of the “strong man” and his party, and the relentless denial of truth and evidence to construct a mythology of racial supremacy are among the essential ideological-cultural features of a fascist party and regime. Over the four years of his disastrous term, Trump soft-pedaled, even promoted right-wing militias, neo-Confederates, “alt-right” hipsters, and other assorted neo-fascist elements on the fringes of his party. He blended the Nixonian “Southern strategy” that appealed to suburban whites in coded language with frequent denunciations of “political correctness” as a violation of white people’s right to free hate speech. He frequently resorted to open appeals to racism (other forms of hatred) and pushed it to the center of his party’s ideology with claims that immigrants from Latin America are criminals, that China deliberately spread COVID, that anti-racist protesters deserve to be shot or beaten, women leaders are detestable, that queer and trans people should be stigmatized, that doctors and scientists are part of a “deep state” conspiracy to undermine his presidency, and so on.

Much of Trump’s two campaigns and his presidency were predicated on hatreds — of racial minorities, foreigners, the poor, religious minorities, and their occasional allies — a strategy that reflected and drew on fear. The neoliberal stage of capital, characterized by a deepening of exploitation to save capitalism from repeated crisis, has produced much anxiety for the 99%. But the incompetent billionaire offered no solutions to the rule of monopoly capital. Instead, he exploited the vulnerability of his Euro-American base under these conditions and tapped into their generations-long belief in their cultural and political superiority in the U.S. social landscape. He fed his narrowing base racist tropes, xenophobic lies, anti-Black stereotypes, and above all new permission to believe in conspiracy theories that elevated their own victimization at the hands of these “others.”

He deployed his campaign of conspiracy against all U.S. social institutions. Republican Party politicians and media personalities have frequently targeted the “lame stream” media, elite college professors, public schools, and “activist” judges for their wrath against imagined offenses. Trump borrowed this style and elevated it to a culture of conspiracy, hate, and retaliation. Even today Trump followers can be found lobbing threats of violence at public health officials who insist on necessary measures against the pandemic, professors who talk about critical race theory, or media personalities that frequently expose Trump’s lies.

The culture of conspiracy translated into a cult of a willingness to die for Trump, as many on the far-right pledged during the pandemic and the 2020 election campaign. They believed his claim that the pandemic was a “hoax” and would vanish quickly, and even as 611,000 people in the U.S. have died, continue to call for “resistance” to scientific measures to protect their own health. Some insisted that “freedom is more important than safety,” though they are unable to answer who would be left to vote for Trump if they all expired from the illness.

A willingness to suffer for the sake of billionaire, racist politics is explored in a recent book by Heather McGhee titled The Sum of US. In it, she explores numerous historical examples where Euro-Americans follow this orientation to white supremacist thinking and action. She shows how whites appear willing to cause their own suffering, a diminishment of resources they have access to, if they become convinced that non-white people, foreigners, or religious others will also benefit.

New examples of this mentality in Florida, Texas, and Tennessee are only the most recent disturbing examples. In those states, Republican Party–controlled governments have threatened to gut funding for public schools and universities if they teach historical concepts like racial slavery as a foundational feature of the U.S. or if they attempt to implement public health measures to protect student, families, teachers, and staff from COVID infection. In other words, supporters of Republican Party policy are willing to suffer from ignorance about their own history, exposure to a deadly infectious disease, and a further defunded public education system in exchange for “owning the libtards.”

Trump’s love for the militias, the conspirators, the Neo-Confederates, their violence, the hateful language, and the relentless attacks on institutions that didn’t share his objectives overlays his abuse of power and the law. The crimes for which he was first impeached — only to be protected by a Republican-dominated Senate that openly indicated its refusal to conduct a fair trial — were a scratch on the surface. Graft, financial corruption, abuse of campaign laws, abuse of corruption laws designed to separate government activities and campaigns, tax evasion, and systematic mismanagement of federal resources were rampant in the Trump administration.

The monopoly sections of the capitalist class, relieved to have apparently sidelined Trump — at least temporarily — without much more than a deadly riot at the Capitol, are struggling to reassert full control. They seem content to allow federal law enforcement to round-up rioters, hoping this move will restore sagging support for their racist system of mass incarceration. They are not interested in relinquishing white supremacy, even if it must be in its subtler forms, or class rule.

In the wake of the coup attempt, spokespersons for those sections of the capitalist class, including Joe Biden himself, have tried to elevate more reasonable voices within the Republican Party. The objective is twofold. First, they want to repair politics-as-usual to restore legitimacy to a political system disfigured by Trumpism and the pandemic, and nearly supplanted by the 2020 #BlackLivesMatter uprisings. Second, they despise the idea of discarding the Republican Party as a whole, as it would mean a default elevation of the left, labor, socialist, and communist forces and a further tilting away from the dominant neoliberal, racist-class policy of the past two generations.

Neoliberalism is a class policy of monopoly capital created in reaction to the civil rights/labor movement struggles of roughly 1930 to 1970 that dismantled Jim Crow, established the New Deal, built the U.S. labor movement, sided (sometimes) with the anti-colonial movements, and generally checked the absolute dominance of the corporations and white supremacist culture of the U.S. Neoliberalism is a set of anti-government, anti-public resources policies rooted in white supremacy (especially anti-Black hatred) that aimed to re-establish the ability of monopoly capital to accumulate based on working-class segmentation and super-exploitation. Privatization, debt-capital, global dominance of finance capital, destruction of civil rights victories (affirmative action, school desegregation, voting rights), racist mass incarceration, and frequent war and intervention was the price paid.

Studies of this period of history reveal some disturbing contradictory trends. Unionization rates collapsed after neoliberalism was launched, resulting in stagnating wages, exploding mass incarceration rates, and sky-rocketing poverty in Black and Brown communities. While public resources were systematically gutted to pay for tax cuts for the wealthy, social mobility and access to social goods diminished, sharpening social inequality. While corporate profits, shareholder dividends, and CEO pay ballooned, overall growth rates in capitalist countries shriveled. Simply put, the declining ability of capitalism to grow required new forms of extreme exploitation. These could be implemented only through battering the labor movement, fueling racist hatreds, and intensifying imperialism. The “socialist moment,” the eruption of a disparate politics that is at least antithetical to the neoliberal agenda and at best a demand for working-class power and leadership of the country, emerged after yet another economic collapse in 2007–8. It has coincided with nearly continuous anti-racist uprisings from 2013 to the present, a massive democratic campaign to defeat Trumpian fascism, a deadly pandemic for which the ruling class has had few solutions, and more frequent and intense effects of capitalism-caused climate change.

The “socialist moment” — its movements and campaigns — have extracted some concessions from monopoly capital through the Democratic Party. Nationwide movements for a minimum wage increase, for voting rights, for workers’ rights, for public investments, for wealth taxes, etc., seem winnable, and even some Democrats appear to support many of these demands.

Growing the “socialist moment” into a permanent social force is necessary. More and more people need to understand why capitalism is doing to them what it is doing. They need to be organized in labor unions, democratic organizations, and working-class or socialist-oriented political parties. We need to train ourselves to understand the social forces arrayed against us, to learn effective anti-racist struggle, to fight for community and social closeness with all of our working-class family. We need to elevate democratic resistance to male supremacy and sexism, homophobia, and transphobia. Yes, we can make permanent Trump’s defeat and build the movement to defeat monopoly capital.

The socialisation of capital