January 6 ain’t over; only you can stop it. 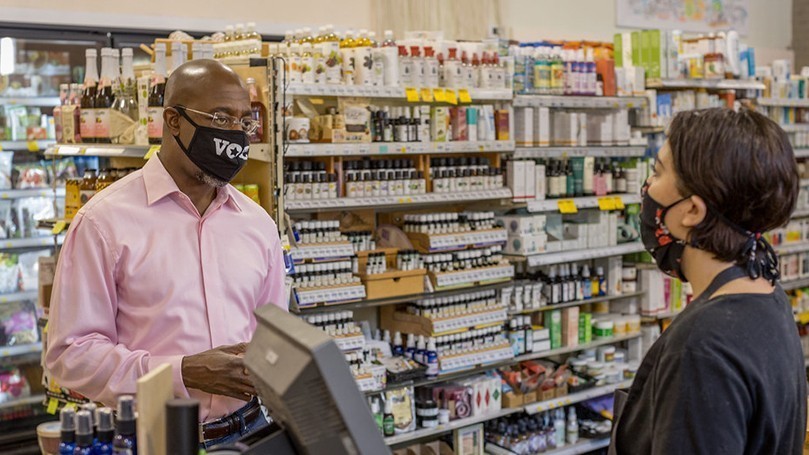 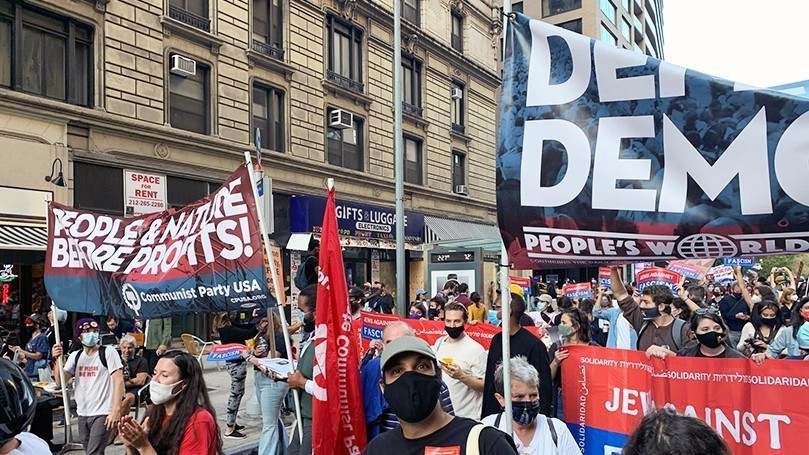 As we begin the New Year, working-class militancy remains high, with strikes and organizing drives continuing across the country. Workers have scored some 24 workplace victories in recent weeks, according to the AFL-CIO.

In the last several days, strikes have been initiated by thousands of Kroger workers in Colorado and the largest railroad workers union in the country.

Unemployment has dropped significantly, but corporate profits are at an all-time high, as is working-class anger at ruling-class wealth while wages remain stagnant. According to Bloomberg, “U.S. corporations pulled in more profits in the three months ended in September than ever before. Not just in dollar terms—something that happens frequently—but as a share of the economy.”

In these circumstances, the Great Resignation continues as workers, fleeing COVID, quit their jobs at the highest rates ever. “Workers were most likely to quit their jobs in the hospitality industry, which had by far the highest quit rate, at 6.1% in November, as well as those in health care. The numbers in transportation, warehousing, and utilities also increased.”

At the same time, inflation, calculated at 7% last year, is at its highest rate since 1982, undercutting modest upticks in wages.

Politically, the situation in the country remains gridlocked and, given the threat of right-wing violence, extremely dangerous. This is an issue that extends beyond the various self-styled militias around the country, potentially involving the U.S. military itself should the situation continue to deteriorate, a point made recently by some among the armed forces top brass.

As the celebration of the King holiday approaches, the struggle for democracy in general and voting rights remains front and center.

With the exception of the infrastructure bill, the Democrats’ legislative agenda appears to be stalled, not only by GOP obstruction and the votes of two Democratic Senators but also by what we’ve called a “crisis of inaction” at the national level in the mass democratic and working-class movements. It should be pointed out, however, that this crisis is not universal. Civil rights groups are fighting heroic battles for voting rights in states like Georgia, South Carolina, and Florida.

With deep fractures appearing in the foundations of the U.S. government, civil society, and economy and with multiple crises swirling, the state of the union appears more than a little uncertain.

COVID, for example, doesn’t seem to be going away anytime soon. With 40% of the population refusing to get vaccinated, along with low vaccination rates in Southern Africa and other regions due to “vaccine apartheid,” living with a certain level of infection may well be the new normal.

The virus continues to have a galvanizing effect politically and a dampening impact economically. How it’s impacting the working class is particularly important. Here the issues of race, gender, corporate profits, and mandates are combining with huge implications particularly with respect to health and safety. 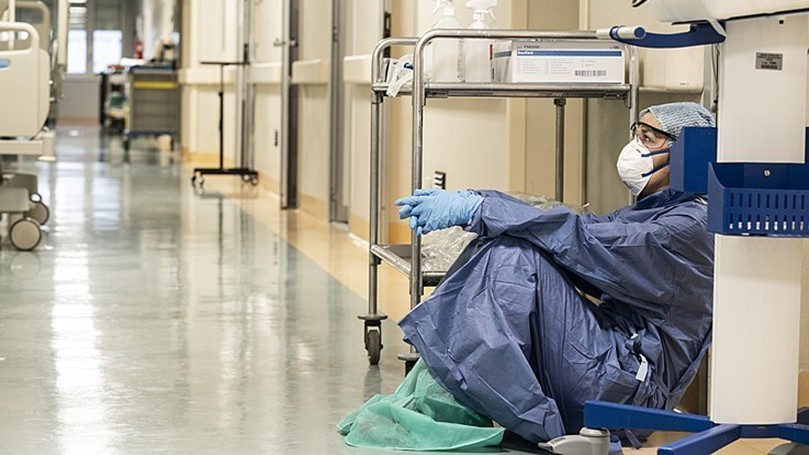 Working women, for example, are one section of the class disproportionately affected by the pandemic, many of whom were forced out of the labor force due to lack of childcare. A recent study suggests that one in three women who were unemployed due to COVID remain so, half of whom are African American.

As is well known, Black and Latino frontline workers are bearing the brunt of the crisis, an issue omicron is exacerbating. According to the Economic Policy Institute, had these workers had greater protection or been able to work from home, in 2020 there would be 48% fewer deaths overall.

The lack of a national system for measuring workplace pandemic exposure and death is a cause for alarm, as provisions put in place last June have expired. In addition, there are no current federal workplace safety standards in place. Instead, companies are asked to implement voluntary guidelines, a decision that rests on whether or not it affects the profit bottom line. Amazon recently pulled back on most if not all of its pandemic safety requirements. One worker at its Staten Island warehouse referred to the shop floor as a “petri dish” of COVID infection.

The Center for Disease Control’s recent scaling back of quarantine guidelines, under big business pressure from airlines and hospitals, has led, at best, to confusion if not outrage. OSHA’s decision not to maintain its Emergency Temporary Standard for healthcare past Jan. 1 has added to the problem. Here there’s a lot of room for political action at the city and state level to demand rules and legislation developed last year be made permanent, extended, and enforced. For example, the AFL-CIO and the nation’s major nursing unions urged a federal court to order the Department of Labor to issue a permanent OSHA standard to protect health care workers against COVID-19. So there’s a lot of concern here and room for action and initiative.

Of course, these issues are impacting the country’s political climate and the January 6th commemoration. With respect to January 6th, shining a bright light on what occurred remains an obligation for all democratic-minded forces, and the brighter the light, the better. 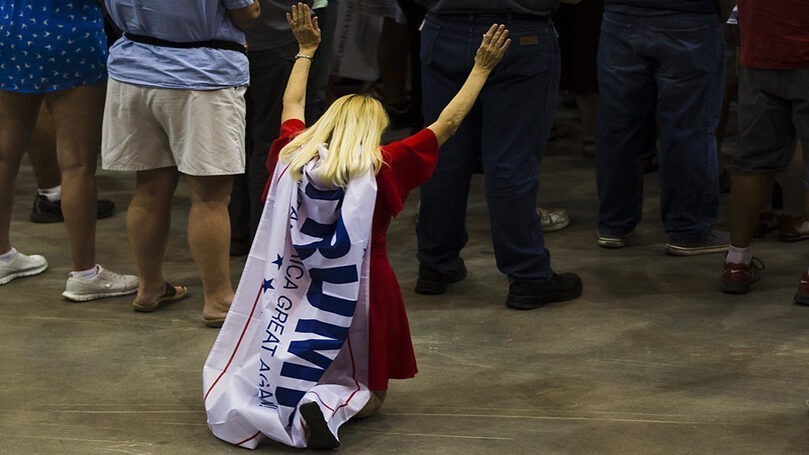 One thing we need to think about more and begin to draw conclusions on is Trump’s ongoing cult of personality-like influence over the GOP and what that party is becoming. We can’t speak about the fascist danger without thinking about the possible instruments and vehicles for implementing it. At what point does the Republican Party cease to be a coalition of the center and extreme right and become an entity mainly of the extreme right allied with openly fascist elements? And this becomes a larger issue as more conservatives ditch the party and retire.

It would be a mistake, to be sure, to lay the entire problem at the feet of Trump. The extreme right and even fascist-like thinking has long been incubating among the ruling class, GOP politicians, and think tanks. Past Democratic compliance with neoliberal policy to be sure is also partly to blame.

One also has to take into account what some call the right-wing mass media ecosystem. But it’s not just a news and propaganda “ecosystem;” it’s also an organizing apparatus.

In this regard, ongoing state and local campaigns by the GOP to rewrite election laws and replace officials responsible for overseeing the vote underscore the problem. The New York Times editors described it this way: “The Capitol riot continues in statehouses across the country, in a bloodless, legalized form that no police officer can arrest and that no prosecutor can try in court.”

Already, election interference and voter repression laws have been passed in 34 states across the country. As of December, there were 262 such bills pending in 41 states.

Of course, the key to addressing this crisis lies in two directions: First, fighting for voting rights, that is, in legislative action, and second, street heat to back it up. With respect to voting rights, without eliminating the filibuster, it’s unclear what in the short term can be done. In the more long term, the only way to overcome the GOP legislative blitzkrieg is by mass on-the-ground democratic and class struggle action.

I was thinking about this in relation to January 6th. The fact is there were two events in early January that shaped the country’s present-day course: one in D.C. at the U.S. Capitol and the other in the state of Georgia. And as important as D.C. was and remains, maybe it’s time to pay more attention to what occurred in Georgia with the election of Jon Osoff and Raphael Warnock to the U.S. Senate and the mass voter mobilization it took to achieve those victories. 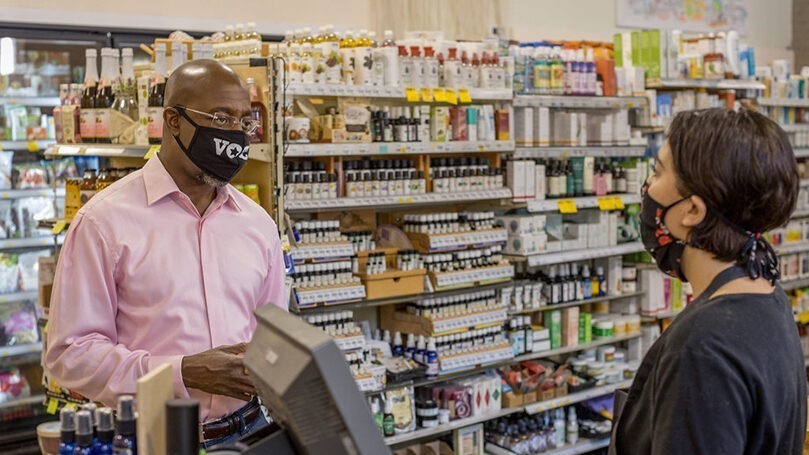 In fact, the country would be well served if the House set up a select committee to study how Stacy Abrams & Co. defeated GOP election interference in Georgia; the Democratic National Committee and the Biden administration do not seem to have drawn the lesson.

In fact, Georgia democratic and civil rights activists, along with some national leaders, chose not to participate in Biden and Harris’ January 11th voting rights speeches in Atlanta in an expression of anger at the administration’s lack of adequate attention to the issue, an ongoing concern in the civil rights community loudly voiced already back in August at the Washington, D.C., voting rights march.

It should be noted that Rev. Al Sharpton, Rev. Jesse Jackson, and the members of the King family were present in Atlanta.

Fissures in the democratic camp are indeed regrettable and, in light of the danger, potentially catastrophic. But instead of wringing our hands, we should emphasize to all who might listen that such tensions can only be overcome with deeds. Words, even those spoken from the bully pulpit, while important, are not to be confused with action. African Americans are expecting a marshaling of the full power of the presidency in defense of democracy and nothing less, particularly after rescuing what seemed a stalled campaign by Biden when he was a contender for the Democratic nomination.

It seems pretty clear that unity, that great prize we are correctly reminded to keep our eyes on, depends, at least in part, on addressing these questions in ways appropriate to the times and sensibilities of today’s activists fighting deep in the trenches.

At that same time, even in the best of circumstances, the Democratic Party, even with the full backing of the presidency, is likely inadequate to the task the country will be faced with in November 2022. 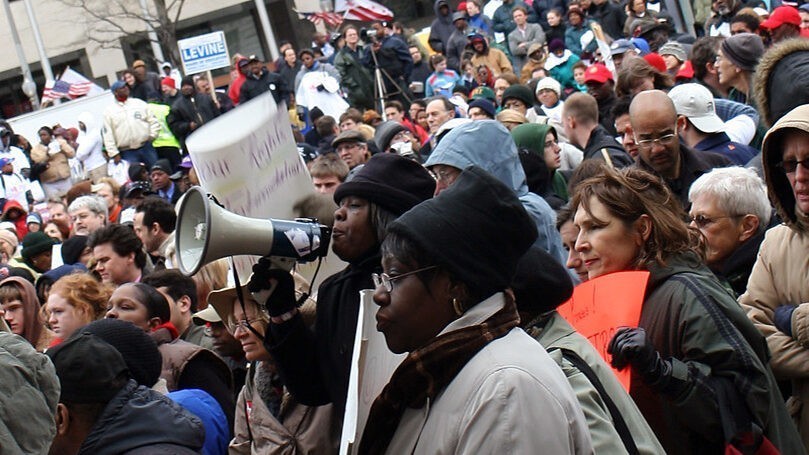 Nothing less than a full mobilization of the people’s forces both within and outside of the Democratic Party will be necessary to resist the coming GOP assault. Marshaling what we call the “forces of political independence” is particularly important. This includes trade unions in the first place, civil rights groups, women’s organizations, youth groups, movements of the disabled, LGBTQ associations, environmental coalitions, etc. — anyone and everyone that has a stake in defeating the right-wing assault including those not yet politically active.

This will be key to defeating Trump’s attempt to seize hold of the U.S. House and Senate. That includes us in the Communist Party!

Nothing could be more important with respect to defeating the threat of fascism. And if we had to choose one independent force to work with in the coming months, at the top of the list should be trade unions. They’re sure to be fielding candidates, setting up phone banks, raising money, and going door-to-door to bring out the vote.

That’s the role of the Communist Party: to fight for the leading role of the working class in the ongoing class and democratic battles — that’s our plus. The fact is the defeat of Trump would have been impossible two years ago but for the initiative and involvement of these forces. This should include fielding our own candidates.

Clearly, in the next days and weeks, the fight for voting rights has to be engaged in with great urgency. Make no mistake: Defeating voter suppression is one of the central struggles of our times. It’s hard to imagine setting back the Trump agenda without it.

This will require shifting gears and resetting priorities: Everything, from strike struggles to advancing the fight for community control of the police, depends on it.

A place to begin is connecting with the on-the-ground activities occurring in various states and cities across the country as the King Holiday is celebrated. Let’s not forget that a whole generation of mass activists took to the streets in the uprisings of two years ago protesting police murder. Reaching out to and working with these forces, building unity between freedom fighters, new and old, along with trade unions, religious groups, etc., in short, all of the people’s forces is essential. The stakes couldn’t be higher, nor the opportunities greater. With struggle, the people can win.