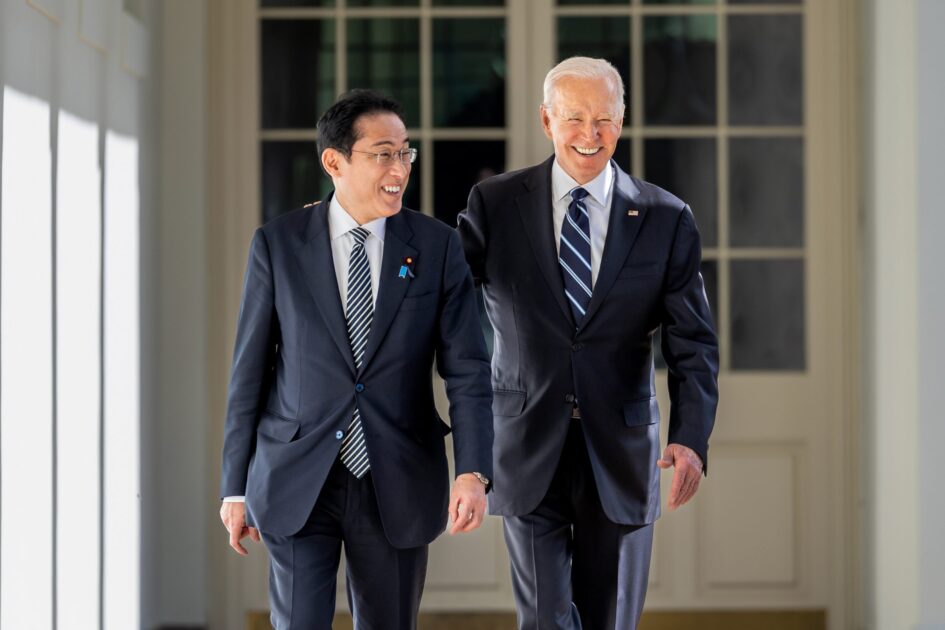 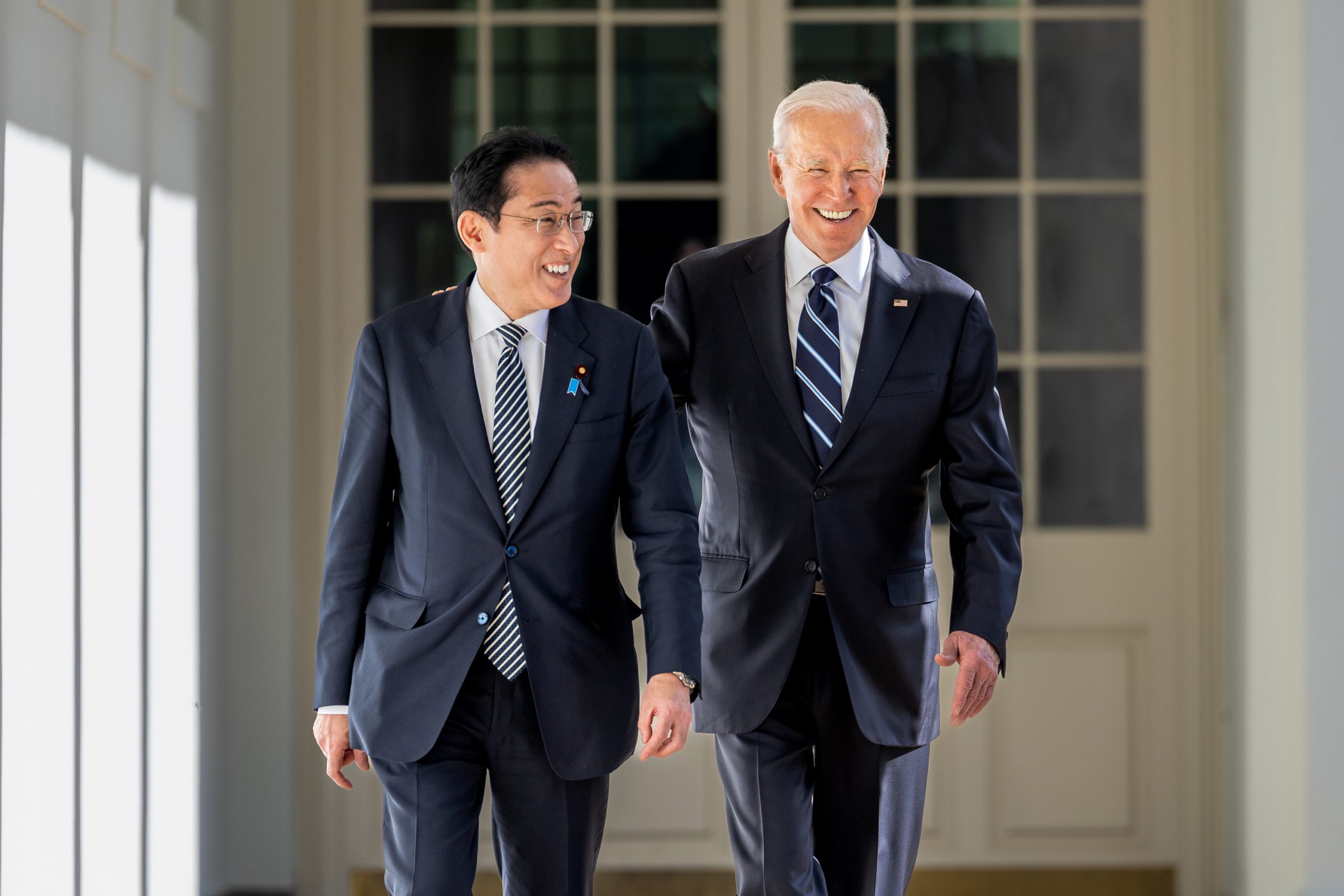 Above Photo: President Biden and Prime Minister Kishida of Japan at West Wing Colonnade in 2023. Office of the President of the United States. (Wikimedia Commons)

It is always the same when Japanese premiers travel to Washington to summit at the White House. Nothing seems to happen and nobody pays much attention even when important things happen, when we should all pay attention, and, when we do pay passing attention, we usually get it wrong. In January 1960, when Premier Nobusuke Kishi visited Washington, President Eisenhower blessed the war criminal and signed a security treaty the Japanese public vigorously opposed. That week Newsweek marked Kishi down as “that friendly, savvy Japanese salesman.”

Kishi proved a salesman, all right. Three years later he used armed police to clear the Diet of opposition legislators and force ratification of the Anpo treaty, as the Japanese call it, with members of his Liberal Democratic Party (LDP) the only ones present to vote on it. “A 134–pound body packed with pride, power and passion—a perfect embodiment of his country’s amazing resurgence,” TIME wrote of the man who ought to have been hanged a decade earlier.

Now we have Premier Fumio Kishida, who summited with our asleep-at-the-wheel president in the Oval Office a week ago. I do not know how much Kishida weighs or how proud of himself or his nation he is, but, in an uncanny echo of the Kishi–Eisenhower summit, Joe Biden blessed his radical turn toward the militarism Japan’s pacifist constitution forbids.

There is a long history here. American New Dealers wrote Japan’s pacifist constitution shortly after the August 1945 surrender. But since the Truman administration set the Cold War in motion in 1947, Washington has incessantly, diabolically pressed the Japanese to breach it. “Do more” was the common exhortation during my years in Tokyo. Now Kishida obliges. If he is the perfect embodiment of anything, it is the obsequious pandering with which Japan’s conservative and nationalist political cliques have conducted relations with the U.S. since the August 1945 defeat.

I read in the hours Kishida spent at the White House the further polarization of the planet as the U.S. insists on compelling it and the capitulation of yet another nation previously capable of a mediating role between East and West, between Global South and Global North, between the U.S. imperium and its designated enemies, China and Russia chief among them. Sweden, Finland and Germany have already abandoned this admirable place in the global order in the name of supporting the regime in Ukraine. Japan now follows suit.

There is a simple chronology leading to the Kishida–Biden summit, and it is useful to follow it. Biden traveled to Tokyo last May to meet with the recently elected Kishida, and the two made a great show of committing to “continually modernize the alliance, evolve bilateral roles and missions, and strengthen joint capabilities, including by aligning strategies and prioritizing goals together.” A month ago the Kishida government announced that it would raise the 2023 defense budget by $7.3 billion, the biggest increase in postwar Japanese history, and that it would double defense expenditure, to 2 percent of gross domestic product, over the next five years. Tokyo has for decades held defense spending to 1 percent of GDP.

Prior to his arrival in Washington last week, Kishida made a grand tour through Europe, stopping in every Group of 7 capital except Berlin. In each the topic was the same: Tokyo will now count itself a fully committed member of the Western alliance, signing on to all that animates it. In London, Kishida concluded a mutual-access defense accord permitting each to station troops on the other’s soil. This followed by a few months a Tokyo–London–Rome agreement jointly to develop a new fighter jet.

And now the Oval Office summit, during which the two leaders pledged, as the government-supervised New York Times put it, “to work together to transform Japan into a potent military power to help counterbalance China and to bolster the alliance between the two nations so that it becomes the linchpin for their security interests in Asia.” The artless Biden, who seems to delight in putting his foot in his mouth, had to add to his official statement, “The more difficult job is trying to figure out how and where we disagree.” Indeed, Joe, a 78-year-old truth, bitter as they come.

This is a very big deal, and, yes, I mean to equate its significance to the Kishi–Eisenhower doings at the height of Cold War I. The ruling LDP, which has tried and failed severally to alter the pacifist constitution to release the Self-Defense Forces from the “no war” Article 9, has periodically “reinterpreted” it—stretched it like a rubber band—for many years. Shinzo Abe, the nationalist premier who was assassinated last year after leaving office two years earlier, forced legislation through the Diet allowing the SDF to engage in overseas combat missions.

That was in 2015. Kishida has now gone further, and in a more highly charged context. He has turned what had been by and large a domestic question concerning the constitution into a global commitment. He has also set Japan on course to become the world’s third-largest military power after the U.S. and China and ahead of France. A lot of the new spending on defense will go to missile systems and warships that will project Japanese power far beyond the home islands and maritime zones over which Tokyo claims jurisdiction. The missiles, which are to include U.S.–made Tomahawks, will be capable of hitting targets on the Chinese mainland.

Kishida, like Kishi 60–odd years ago, must now get his new “defense strategy” through the Diet. I cannot predict his political chances but stand with those many Japanese who hope he either fails or faces a vigorous fight that shakes the Japanese and the rest of us awake to what Tokyo’s ruling cliques are attempting. Japan is not, by law and national sentiment, supposed to be “a potent military power,” as The Times approvingly put it. Japan has sought, with difficulty, a new purpose for itself since the Cold War’s end and its achievement of economic equality with the West. Reenlisting as Washington’s principal spear-carrier in the western Pacific is nothing more than weak-minded recidivism.

It could not be clearer that Tokyo has just elected to stand with Washington in the latter’s campaign of hostility and provocation against the Chinese People’s Republic. It is equally the case that the five Chinese missiles that landed in Japan’s territorial waters following Nancy Pelosi’s grandiose visit to Taiwan last summer weighed on Kishida’s course of action—if only by way of giving him a political opportunity.

But Tokyo would have handled this matter differently in years past. There would have been a diplomatic contretemps, and maybe some temporary sanctions against Chinese-made products the Japanese can do well enough without. But Japan would have maintained its delicate balancing act between the U.S. and the mainland. Of this I am certain. Neither would a premier visiting Washington sound off about the conflict in Ukraine, as Kishida has taken to doing. This, too.

I fail to see any way Japan’s new declaration of allegiance more secure, and let us not speak of the rest of East Asia. Washington desires above all to raise tensions in the Pacific. Kishida has inadvisedly–with plenty of precedent–to cooperate in this cultivation of anti-Chinese belligerence.

There is a history here, too. The Japanese have nursed a pronounced ambivalence as to their place in the world since they began making themselves modern in the 1870s. Yukichi Fukuzawa, a prominent Meiji-era intellectual, published an essay in 1885 called “Datsu–A ron,” “On Departure from Asia.” In our time there have been numerous refinements on the thought. We have datsu–A, nu–O, leaving Asia, joining the West, and datsu–A, nu*–*Bei, leaving Asia, joining America. More recently: nu–A, datsu–O, joining Asia, departing from the West; nu–A, nu–O, joining Asia and the West both, and nu–A, shin–O, joining Asia and being merely friendly with the West.

I find zai–A, shin–O, which translates as being Asian, being merely friendly with the West, the most curious of these variations: Being Asian, or “existing in Asia” (another translation), is a considerable leap after more than a century of confusion as to the national identity. Kishida has just tossed out this notion in favor of the old “leaving Asia,” impossible as this may be.

It is well enough, you could argue, to transcend an enduring confusion. But the Kishida government has done so in the worst kind of way. Japan’s proper place resembles Germany’s: Its destiny is to stand between West and East, and there need be no confusion about this.

All gone now. I have no idea how Japan will fit in the Western security alliance, but I am pretty certain it will be other than an equal partner. Since Theodore Roosevelt’s day the U.S. has never looked straight across the Pacific at eye level. Subtly or otherwise, it knows only how to look down.

If Shinzo Abe was an out-of-the-closet militarist and nationalist—Nobusuke Kishi was his grandfather—Fumio Kishida’s background makes him a less-than-obvious read for the direction he now takes. He has long been a senior figure in the LDP’s Kōchikai faction, among the party’s oldest and, by tradition, comprised of foreign policy doves who favor diplomatic engagement and who defend Article 9 of the constitution. On the other hand, he served as Abe’s foreign minister from 2012 until the latter left office eight years later. When he was elected premier last year, Kishida immediately came out against China’s supposed aggressions, as Washington incessantly cites them, and I wish someone would at last give us a list of these, as I cannot think of any.

There is a tradition among Japanese conservatives, and certainly its mainstream nationalists, that we cannot leave out. It is subtle, a paradox, and I used to find it difficult to explain to my foreign editors. However vigorous the nationalism of Japanese nationalists, they always turn out to be putty in Washington’s hands. Nobusuke Kishi was an excellent example of the phenomenon. I think this reflects some respect for the victor long lodged in the consciousness of precisely those most inclined to defend Japan and “Japanness” against the crude intrusions of “round eyes.”

Annihilating the Virus Enemy in Japan

The History between Japan and China