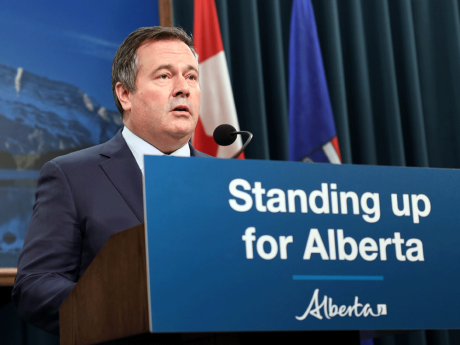 Not content to champion a war on the environment by funneling literally billions into pipelines and tar pits, Jason Kenney and his Alberta UCP gang funded a war on environmentalists using public money.

Kenney and Co. decided that evil foreign conspirators were secretly funding environmental groups based or active in Canada, and that the purpose was to unfairly turn public opinion against Alberta’s tar sands.

So they passed Bill 1 in 2020, the Critical Infrastructure Defence Act. This handy dandy law could be used against environmentalists or against Indigenous activists blockading roads and railways through their unceded lands. The vaguely worded law made it illegal to “obstruct, interrupt or interfere with” any infrastructure the government deems “essential”.

Then there was the brief but glorious skirmish against chalk sidewalk drawings, initiated by Education Minister Adriana LaGrange. Signs in her constituency office window threatened to use mischief laws against chalk drawers.

But behind it all was a $30 million campaign to expose and counter the propaganda and lies of the environmental movement. With that money they set up a war room which they called “The War Room”. It was staffed with UCP true believers and petroleum industry lobbyists. But all true blue Albertans were enlisted to fight the hordes saying nasty things about one of the world’s most environmentally destructive megaprojects.

So they took an additional $3.5 for a 2-year inquiry headed by an accountant named Steve Allan. Allan et al produced a 657-page document which concluded that, yes environmental groups received some foreign funds, but it remained a small portion of their incomes. He did not “find that participation in an anti- Alberta energy campaign is in any way improper or constitutes conduct that should in any way be impugned.” All donations were legal and properly declared in public records, and actions were well within rights of free speech and assembly.

As he usually does when the news is bad, Kenney was nowhere to be found when the report was finally released. Energy Minister Sonya Savage was left holding the bag, having to admit that environmental groups broke no laws and were within their rights.

“So is it illegal? No,” she told the press conference. “Was it wrong? I think the majority of Albertans would say it was wrong, and they want to know how it happened, who was involved.” But she stubbornly tried to reanimate the conspiracy, contradicting the inquiry’s findings, ranting about “vast amounts of foreign funding”, “often untraced”.

It was reminiscent of the old Monster Chiller Horror Theatre skit with host Count Floyd desperately trying to convince the kids that a not-frightening old movie was “scarrrrry”.

The real scary thing is that Kenney and his UCP majority can still do plenty more damage before the next election in spring of 2023.