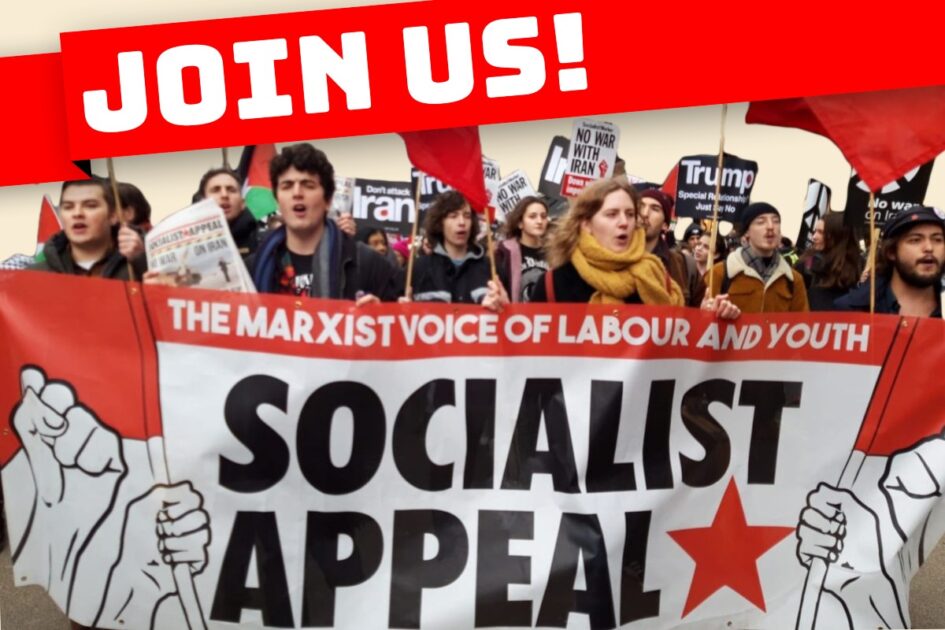 The hypocrisy and cynicism of the British establishment knows no bounds.

While crying crocodile tears over Ukrainians fleeing their homes, belligerent Boris and the Tories turn a blind eye to the ‘bad’ refugees – the victims of imperialism – who are looking to escape war, poverty, and repression in the Middle East and Africa.

Indeed, they are actively looking to create a ‘hostile environment’ for such migrants, and erect a fortress to keep asylum seekers out.

At the same time, Conservative ministers promise hellfire and brimstone against Putin and his oligarchs. Yet no sanctions are threatened against the oil despots in Riyadh, who are responsible for a humanitarian crisis in Yemen.

In fact, the government happily does business with the murderous Saudi monarchs, encouraging British arms manufacturers to sell them the bombs that rain down on innocent Yemeni men, women, and children.

Meanwhile, the BBC – Britain’s state broadcaster – has proven that it is no less a mouthpiece for our chauvinistic ruling class: blaring out a constant, deafening chorus of nationalism and jingoism.

The rest of the capitalist press, for their part, have been no different. And never ones to let a good crisis go to waste, they have utilised the war hysteria (which they themselves have whipped up) to launch a scandalous attack against organised workers.

Earlier this week, for example, the Torygraph disgracefully attempted to smear striking Tube workers – who are struggling against cuts to jobs and pensions – as “Putin apologists”, describing RMT members at TfL as “the enemy underground”.

A headline from a gutter rag from gutter reporters, all designed to attack the working class

And it is the duty of socialists to highlight this fact – and to aim our fire directly at our main enemy, the real aggressors: the warmongers at home. 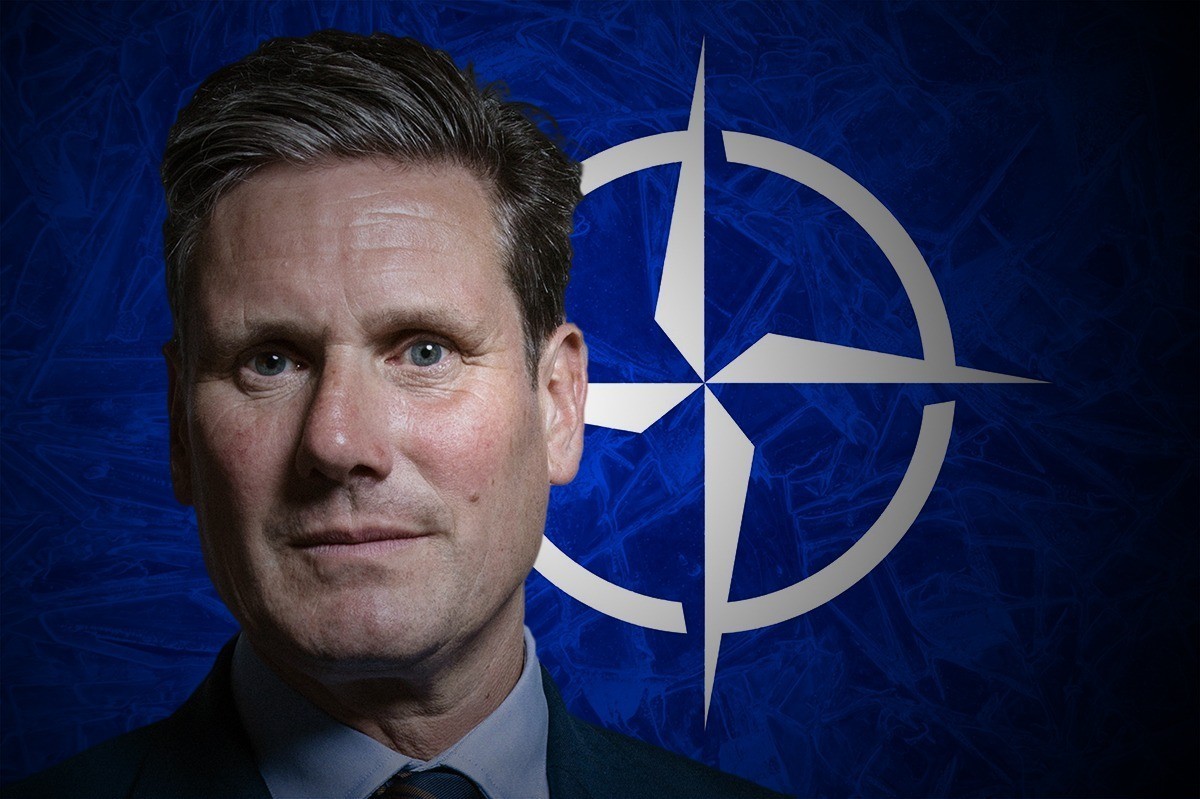 ‘Sir’ Keir Starmer, meanwhile, the establishment’s knight in shining armour, has competed with Boris Johnson to prove who is the more loyal servant of Western imperialism.

Wrapping himself in the Union Jack, the chest-thumping Labour leader has not only demanded harsher sanctions, but has also weaponised the war in Ukraine in order to crush and emasculate any remaining left-wingers within the party.

Following on from his nauseating love letter to NATO in the Guardian, Starmer has now effectively made opposition to the imperialist military alliance an expellable offence.

Last week, the Labour leadership threatened to withdraw the whip from eleven left MPs who had signed a Stop the War statement that (tamely, but correctly) criticised NATO for its role in the current conflict. Unfortunately, these MPs quickly capitulated and withdrew their signatures.

Similarly, earlier this week, left-wing backbenchers John McDonnell and Diane Abbott pulled out of speaking at a Stop the War rally in London, after Starmer warned Labour MPs that there was “no place” in the party for anyone who dared to speak out against Western imperialism.

Young Labour, the party’s official youth wing, has also been defenestrated recently for taking an anti-imperialist stance. The YL social media accounts have already been seized by apparatchiks at Labour HQ. And there are rumours that the whole youth organisation could be bureaucratically shut down in order to silence dissent.

When asked whether Stop the War was to be officially proscribed, Keir Starmer menacingly retorted: “That would be a matter for the [right-wing controlled] national executive committee.”

It is clear, therefore, as with accusations of antisemitism against Jeremy Corbyn and his supporters, that the question of NATO and the Ukraine war is being cynically used by the Labour right wing as a stick with which to beat the left – the main difference being that the former was a fabricated slander by the Blairites and the press, whereas opposition to imperialism is a genuine, widely held belief amongst grassroots members. 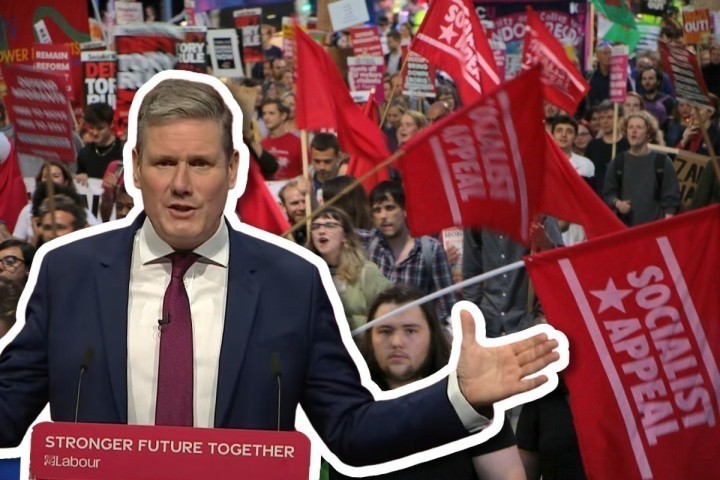 This right-wing repression is taking place alongside a flare-up of the McCarthyite witch-hunt against the Labour left.

Recently, for example, a number of prominent left activists in the North East have been expelled from the party, on the grounds of showing support for Socialist Appeal. This includes Holly Waddell, a Labour councillor in Northumberland, and Tony Pierre, campaign manager for North of Tyne Mayor Jamie Driscoll.

Whilst a number of those thrown out in the region are indeed Socialist Appeal supporters, Waddell and Pierre – we can confirm – are not, and never have been, members of our organisation.

But the right wing doesn’t care for such details. After all, endorsement of Socialist Appeal and other excluded groups, real or otherwise, was only ever a useful excuse to justify an attack on the most militant layers of the left.

As we warned at the time of our proscription, banning Socialist Appeal was always going to be the thin end of the wedge; a prelude to a wider purge by Starmer and the right wing against the whole of the left within the Labour Party.

“…the real intentions of the right wing [are] to use these proscriptions as the thin end of the wedge to drive out the whole of the left; as a tool for expunging all traces of socialism and ‘Corbynism’ from the party.” https://t.co/BWlVwWPLwl

Unfortunately, many leading left-wingers naively believed otherwise. Instead of fighting tooth-and-nail against our expulsion, they buried their heads in the sand, hoping that they would be spared a trip to the gulags by the Blairite bureaucracy.

In this respect, it is pointless for left-wingers to now complain that they have been ‘mistakenly’ expelled from the party. The right wing have made no ‘mistake’. They know exactly what they are doing. They are ruthless and bloody-minded in their aims.

The biggest tragedy is that the left never showed the same iron determination when they had a chance.

Alongside those expelled, an exodus of tens-of-thousands have already left the party, demoralised and disgusted by Starmer’s sharp rightward turn, which has included: praising big business; suspending Corbyn from the PLP; and embracing Tory defectors with open arms.

Similarly, a number of trade unions have either withdrawn funding or disaffiliated, or are considering these options.

Now, with anti-imperialism declared illegal within the party, many more are ripping up their membership cards and saying: ‘enough is enough!’

In Liverpool, for example, a group of left-wing Labour councillors has taken a stand, and have voted against cuts to the local council budget. This will no doubt lead to their expulsion, for breaking the party whip and opposing austerity.

BREAKING: Seven Liverpool Labour councillors have broken the whip and voted against the party’s budget

They could face expulsion from the party

But the question now, as with Laura Pidcock’s recent resignation from the Labour NEC, is: where next?

Unfortunately, none of these lefts have any answer to this question; any strategy on how to advance the struggle beyond making noble, well-meaning, but largely impotent gestures.

The same is true of those saying ‘stay and fight’. John McDonnell, for example, justified his decision to acquiesce to Starmer’s Stop the War ultimatum by saying that it is important for socialists to “stay on the pitch for as long as it takes”.

But what good is a player who has no hope of scoring any goals, nor any plan for winning the match?

The left reformists are dismayed, dejected, and directionless because they have no perspective; no vision for genuine change – for the socialist transformation of society.

Capitalism is in its deepest ever crisis, however, with no end in sight. Indeed, the instability and turbulence we are seeing across the world – economically, socially, and politically – are set to escalate even further, as inflation rages and the dislocation of the war takes its toll.

Strikes and protests are already spreading like wildfire. And these battles will only intensify as the class struggle heats up, in Britain and internationally. In the process, new layers of workers, determined to fight, will be drawn into action, shaking up the status quo.

The need for a resolute leadership – a Marxist leadership which understands that capitalism cannot be patched up, but must be overthrown – will become all the more necessary.

This means building the forces of Marxism, in the labour movement and on the streets.

The capitalist class and its jingoistic flunkies have declared war on the working class, the poor, and the youth. We urge all those wanting to fight back to join us in this task.

What Can We Learn from the Democratic Establishment’s War Against India Walton?

Machinists in Iowa strike in struggle over wages, respect