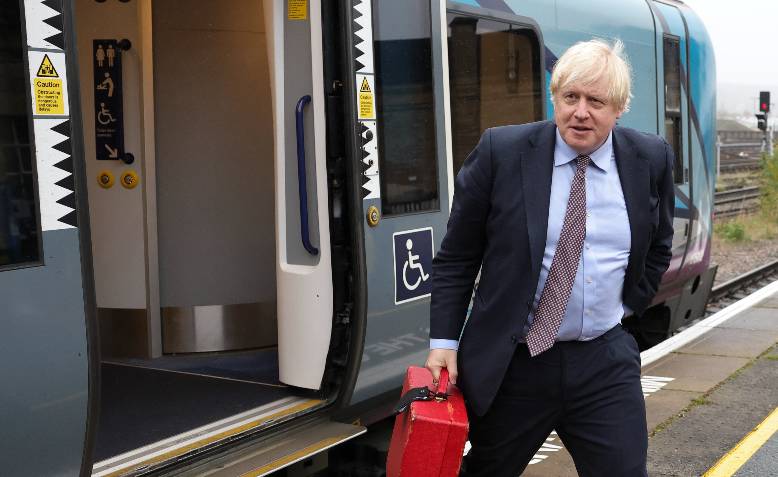 This government’s addiction to over-promising and under-delivering has now shown itself in transport policy, writes Sean Ledwith

The changes to the Tories’ Integrated Rail Plan (IRP), announced by Transport Secretary Grant Shapps, are a classic example of the chasm between Johnson’s levelling up rhetoric and the reality on the ground. The downgrading of both HS2 and the Northern Powerhouse Rail (NRP) projects amount to yet more humiliating reversals from a PM who infamously over-promises and under-delivers in multiple policy areas. Johnson loves nothing better than to be seen on a building site with a hard hat and a hi-vis jacket, but his PR spin is rarely matched by the substance of policy.

Since the 2019 election, the government and its supporters have tiresomely banged on about a supposedly new political dynamic in the north of England in which previously impregnable Labour-voting Red Wall seats have been captured by the Tories. This electoral realignment would be followed up, according to Johnson and his acolytes, by renewed investment in the long-neglected industrial and urban landscapes of the major northern cities and towns. The watering down of the IPR, revealed this week, exposes how shallow that commitment is, and that behind the PM’s levelling up promises there is little more than the same old Tory betrayal and spin.

Thrown in the bin

The IRP promised that there would be a Y-shaped high-speed rail network linking the capital with Birmingham and the two major northern cities of Manchester and Leeds. This week it has been announced that the line heading northwest will go ahead, but the eastern leg will terminate in the East Midlands. A new rail hub at Toton, near Nottingham, was supposed to be the focus of the HS2 link to Sheffield and Leeds, but this will now not go ahead. Lillian Greenwood, MP for Nottingham South, is among many in the regions affected who feel betrayed by this row back: ‘For a decade authorities have been working how to maximise the benefits for the entire region from our hub station at Toton and these plans are being thrown into the bin.’ Rail engineer and policy analyst Gareth Dennis similarly noted: ‘This is going to make railways worse in the north and Midlands than they are now.

The second major component of the Tory transport fiasco is the scrapping of a new high -speed Liverpool-Leeds section of Northern Powerhouse Rail. Two years ago Johnson stood in front of a replica of Stephenson’s Rocket in a Manchester museum and boldly declared: ‘I want to be PM who does for Northern Powerhouse Rail what Crossrail did for London.’

This was supposed to enhance massively the notoriously slow and over-crowded service between those two northern metropolises. NPR was also promoted as upgrading the communications infrastructure in nearby Bradford which, despite being Britain’s seventh biggest city and having the youngest population of any major UK city, has long being identified as grossly under-served in transport terms. Incredibly, rail travel from Bradford in some ways has deteriorated over the last one hundred years. It actually takes longer to get to both Leeds and Wakefield than it did in the age of steam!

Many young people in Bradford report feeling they have to move away from the city for study or employment purposes, because the local train service is so antiquated. No high-speed trains currently go through the city, and local services have to reverse tortuously out of its two termini at a snail’s pace.

Running out of steam

Even some Tory MPs have started to express exasperation at the wafer-thin nature of this Prime Minister’s promises. Jake Berry, one of the Northern Research Group of Tory MPs, who rode to power on the Red Wall wave in 2019, launched an excoriating attack on Johnson in the Commons yesterday:

‘I was in Manchester when the PM committed to building a new line between Manchester and Leeds, a commitment reaffirmed in our manifesto and in conference speech … were the voters of the North right to take the PM at his word?’

It is unlikely that a careerist like Berry will change his mind about this woeful government, but hopefully this U-turn over transport policy will help persuade some of those voters seduced by Tory lies in 2019 to see the light. Added to his shambolic performance over parliamentary sleaze, it is clear we are currently enduring a prime minister who is rapidly running out of steam.

Johnson is levelling up on lies – CounterBlast