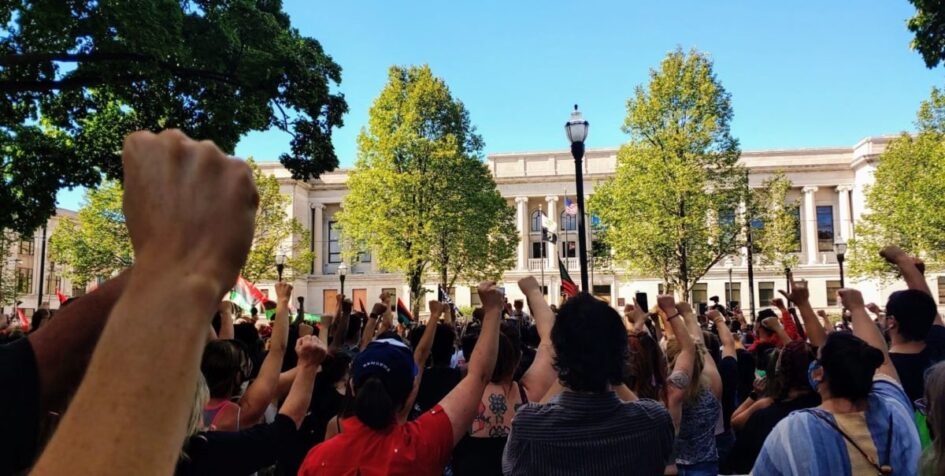 Photo: Crowd holding raised fists at a protest in Kenosha, Wisconsin against the shooting of Jacob Blake

After the court heard from witnesses for eight days, testimony concluded Thursday in the trial of Kyle Rittenhouse, with closing arguments scheduled for Monday. Rittenhouse is on trial for the murder of two people and the attempted murder of a third, all of whom he shot in Kenosha, Wisconsin last year during anti-racism protests following the police shooting of Jacob Blake. Rittenhouse pleaded not guilty to all of the charges he faces, ridiculously claiming that he acted in self-defense.

He also took the stand in his own defense this week, putting on an obviously fake, tearful performance in order to gain sympathy by appealing to the racist attitudes of the judge and potentially jurors. Rittenhouse’s lawyers want to portray him as a “good kid” — an innocent, white teenager who doesn’t deserve to be punished for his actions. But Rittenhouse has shown no remorse for the murders — his contrition is not for the lives he took, but for fear of the potential consequences he faces.

Even before the trial began it was clear that the presiding judge, Bruce Schroeder, is biased in favor of Rittenhouse. He showed this with his decision to grant the defense’s request to ban the use of the term “victims” to describe the people that Rittenhouse shot and killed. At the same time, Schroeder denied the prosecution’s request to similarly ban the use of words like “looters”, “rioters”, and “arsonists” to describe the same people.

Throughout the trial so far, Judge Schroeder has continued to show his bias through his preferential treatment of the defense team, admonishing the prosecution while giving wide latitude to Rittenhouse’s lawyers. He also repeated and lent validity to the defense’s unfounded and baseless claim that the prosecution could be using distorted video evidence, and called for a 10-minute break in the trial to allow Rittenhouse to “collect himself” while he fake cried during his testimony.

He has also taken under advisement the defense’s request to rule the case a mistrial due to “prosecutorial overreaching”. This means that he could choose to grant the request at any time. And because the defense moved for a mistrial “with prejudice”, that would mean that the case couldn’t be retried, and Rittenhouse would automatically go free.

Rittenhouse, who lives in Illinois, had no business being in Wisconsin in the first place, let alone in Kenosha. The fact of the matter is that if he had not entered a community that was not his own that night with a gun and the intent to kill, there would have been three fewer people shot, and two fewer deaths. In fact, had it not been for Kyle Rittenhouse’s presence, nobody would have died in Kenosha that night – the only people killed were those murdered by him.

The defense and much of the corporate media have been pushing the self-defense narrative, the idea that Rittenhouse was just protecting himself from these purported “vicious attackers”. That claim is utterly ridiculous. Claiming that Kyle Rittenhouse was acting in self-defense is like saying that if someone walks into a stranger’s home armed with a gun, and shoots the people who live there for trying to stop them, then the intruder was acting in self-defense. On top of that, one of Rittenhouse’s victims was shot in the back — how exactly can someone claim to be defending themselves against someone who’s facing away from you?

Equally absurd are Rittenhouse’s claims that he went to Kenosha that night to protect anyone or anything. The right wing has rallied around Rittenhouse like some sort of hero and defender of the people, rather than acknowledging him for the murderer he is. The only people who needed protecting were the people he killed, who were rightfully protesting the police shooting of Jacob Blake, an unarmed Black man. Rittenhouse was driven by undoubtedly racist motivations to wield a gun against demonstrators taking part in the movement for Black lives. Despite the blatant bias of Judge Schroeder, and the disgusting glorification of his actions by the right, there is no question that Kyle Rittenhouse is guilty of murder and should be convicted.