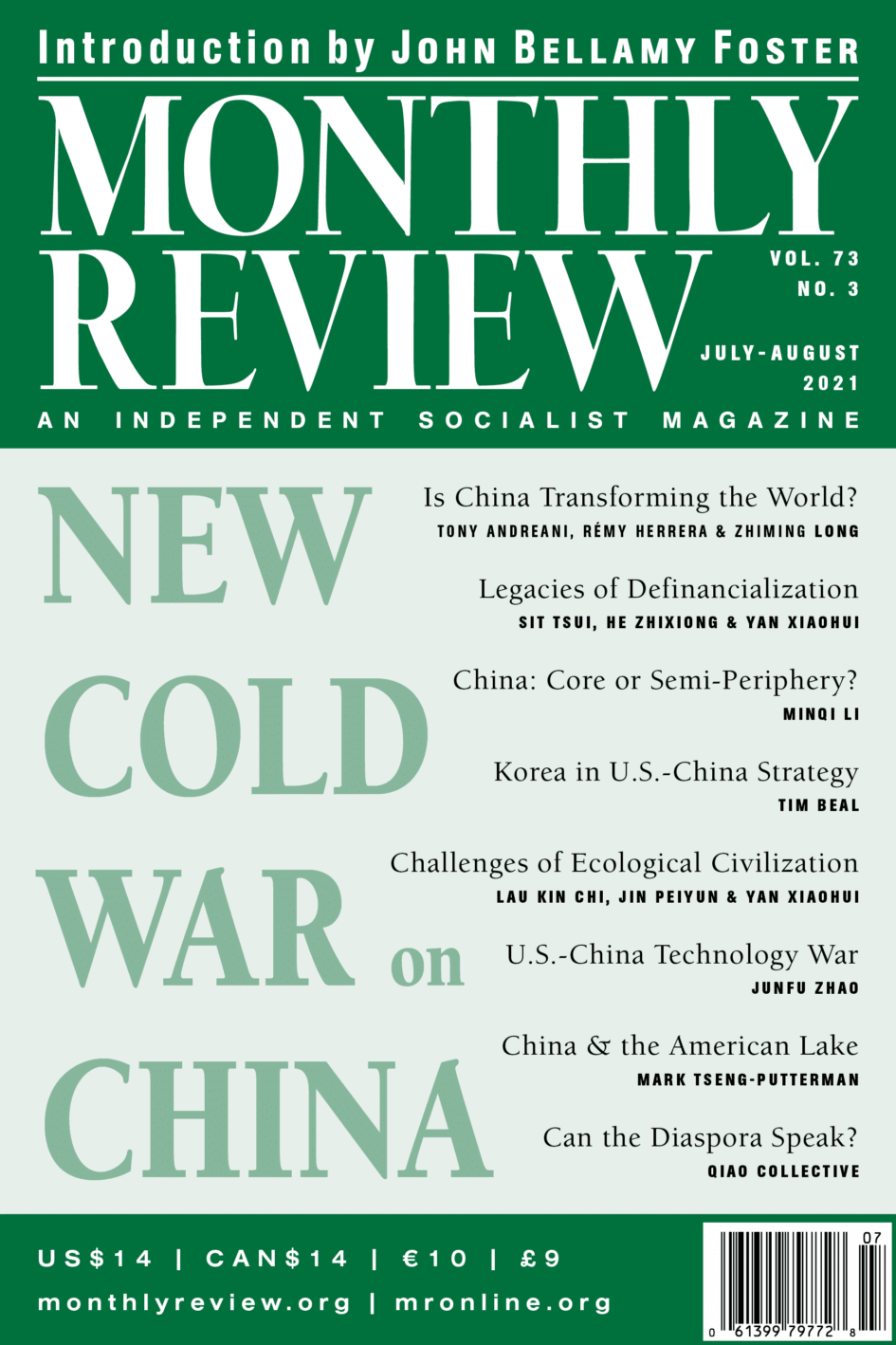 This special issue of Monthly Review is devoted to the New Cold War on China. This leads us to the question: What has been the view of the Chinese Revolution presented in Monthly Review in the past seven decades? How has it changed over time? Here we are reminded of a famous statement often attributed to John Maynard Keynes, though likely apocryphal. Accused by a critic of being a flip-flopper, Keynes replied: “When the facts change, I change my mind. What do you do, sir?” (Jason Zweig, “Keynes: He Didn’t Say Half of What He Said. Or Did He?,” Wall Street Journal, February 11, 2011). As Paul A. Baran, one of the principal MR figures in its early years, observed: “[Karl] Marx and in particular [V. I.] Lenin being master-tacticians shifted horses and arguments as conditions changed (rightly so, to be sure!)” (Paul A. Baran and Paul M. Sweezy, The Age of Monopoly Capital [New York: Monthly Review Press, 2017], 394). The question then becomes not the changing views themselves, but how these shifts in perspective reflect changing historical circumstances.

The very first Review of the Month in the first issue of Monthly Review, written by its founding editors Leo Huberman and Paul M. Sweezy, included a section on “China and Socialism.” As the MR editors stated at the time:

Often stricken down, the Chinese Communists, like Antaeus in the Greek myth, each time rose up again with redoubled strength to carry the fight to their enemies. The Long March 1934–35, the organization of the countryside behind the Japanese lines, the building up of an army capable of overcoming in three short years the American-equipped and partially American-trained troops of Chiang Kai-shek—these and many other achievements form the elements of an epic which is unique in all the annals of history and will be studied with admiration as long as the human race maintains an interest in its own astonishing potentialities. (Huberman and Sweezy, “The Atlantic Pact: China and Socialism,” Monthly Review 1, no. 1 [May 1949]: 5)

Nevertheless, the MR editors pointed to the enormous obstacles ahead, to a considerable extent highlighted by Mao Zedong himself. China was in a “preparatory, or pre-socialist, period” with decades-long struggles ahead of it (6). Although most of the struggles the Chinese Revolution faced were internal, having to do with the momentous task of national development in an overwhelmingly peasant society, external threats were quick to emerge as well: principally arising from the extension of the Cold War to China, including U.S. military support of Taiwan (part of China), where the defeated Kuomintang had fled, and the outright warfare between the United States and China in the Korean War (1950–53).

In the period of the Sino-Soviet split beginning in the late 1950s, which had its theoretical expression in the form of what was known as the Great Debate over world socialist strategy, Monthly Review was itself somewhat split. Baran was generally more sympathetic to the Soviet position of peaceful coexistence, aimed at protecting the USSR as the leading socialist nation, while Huberman and Sweezy leaned toward the Chinese view, due to its more direct support for world revolution in the periphery. (See Huberman and Sweezy, “The Split in the Socialist World,” Monthly Review 15, no. 1 [May 1963]; Baran and Sweezy, The Age of Monopoly Capital, 390–401.)

By 1972, the Cultural Revolution had passed its high point, and Washington under Richard Nixon reestablished diplomatic relations with China as part of the U.S. grand imperial strategy of weakening the Soviet Union by taking advantage of the Sino-Soviet dispute, which had assumed the form of a border conflict in 1969. This was the beginning of the period of U.S. engagement with China, to last for fifty years (ending officially only in May 2021, in a declaration by the Joe Biden administration). In 1978, after Mao’s death, Deng Xiaoping became the paramount leader in China and launched the reform period or what was known as the Chinese road to socialism via market socialism, including the opening of the country to the world economy. Hinton was to refer to this period critically as The Great Reversal (New York: Monthly Review Press, 1990). His book began by declaring, in no uncertain terms: “June 4, 1989, stands as a stark watershed in China’s modern history. The slaughter of unarmed civilians by units of the People’s Liberation Army as they blasted their way to Tiananmen Square illuminated the ‘reform’ era as nothing else could. It lit up, like a bolt of cosmic lightning, the reactionary essence of China’s current leading group.”

More than a decade and a half later, Monthly Review was still struggling with the complex reality of Chinese development, including the market reform period, China’s rapid rise, and the dramatic shift in a short period from China being one of the most egalitarian societies on Earth to having levels of inequality similar to those of the United States. In 2005–08, the magazine and press published a number of varying perspectives on China’s meteoric development and its relation to capitalism, including: (1) Martin Hart-Landsberg and Paul Burkett’s China and Socialism (New York: Monthly Review Press, 2005), criticizing China’s elite-determined imposition of a strong market logic and arguing for the necessity of a people-based approach if Chinese socialism were to continue. (2) Harry Magdoff and Fred Magdoff’s “Approaching Socialism” (Monthly Review, July–August 2005), which contended that market socialism was a “slippery slope” and that if state control of the economy and planning were relinquished altogether, socialism with Chinese characteristics would turn into capitalism with Chinese characteristics. (3) Minqi Li’s The Rise of China and the Demise of the Capitalist World Economy (New York: Monthly Review Press, 2005), addressing what China’s rise meant in terms of the destabilization of the global capitalist order, as well as the still open question of China’s future.

The Great Financial Crisis that emerged on Wall Street in 2007–09 shook the entire world economy, undermining faith in capitalism worldwide. China responded with increased state control of finance, a major economic stimulus, and transformations in its planning process, thereby recovering rapidly from the crisis. These conditions led to the strengthening of an emergent critical Marxist tradition, challenging what had been the growing influence of neoliberal thought (see Wang Hui, “Fire at the Castle Gate,” New Left Review [2000]: 86–87, 95). Meanwhile, the Chinese leadership increasingly recognized the dangers of full-fledged capitalism and began to return to Marxist theory, contending that it remained crucial to China’s road forward. Xi Jinping’s New Era introduced a massive anticorruption campaign, fighting the cronyism that market-based development had introduced. In 2020, absolute poverty was eliminated in China. (See Lowell Dittmer, ed., China’s Political Economy in the Xi Jinping Epoch [Singapore: World Scientific Publishing Co., 2021], 8, 11, 18, 45, 350, 366.)

Monthly Review’s approach to China underwent major shifts in response to these changing conditions. The transformations in the magazine’s outlook occurred partly through an engagement with ecological Marxism in China, which experienced rapid growth in this period (Zhihe Wang, “Ecological Marxism in China,” Monthly Review 63, no 9 [February 2012]: 36–44), and partly through the work of Samir Amin and those associated with the World Forum for Alternatives, which he had founded, and with which Monthly Review was connected. (An additional influence was Monthly Review’s research into global value chains, demonstrating how China continued to be imperialistically subordinated to the core capitalist economies. See John Bellamy Foster and Robert W. McChesney, The Endless Crisis [New York: Monthly Review Press, 2012], 155–83.)

However, it was Amin’s ground-breaking article, “China 2013” (Monthly Review 64, no, 10 [March 2013]), which provided a conception of the Chinese leadership’s anti-imperialist sovereign project and its continuing structural relationship to socialism, that has chiefly governed Monthly Review’s perspective in recent years. From this standpoint, the anticolonial Chinese Revolution—which commenced in 1850 with the onset of the Taiping Revolution and, following a “Century of Humiliation,” led to a world historic victory with the founding of the People’s Republic of China in 1949—still continues: in the form of a sovereign national project with socialist (as well as capitalist) characteristics. Today, the Chinese Revolution remains in statu nascendi, the period of its birth, its future still to be determined.

Donald Armour Clelland died on April 22 (Earth Day), at age 85. Clelland was for many years a professor of sociology at the University of Tennessee in Knoxville. He was a longtime member of the Marxist Sociological Association, a leading contributor to world-systems theory, and identified closely with Monthly Review. He is best known today for his pioneering work investigating what he called “dark value” in global commodity chains. Using this concept, he examined the process of global unequal exchange, whereby core monopoly capital was able to expropriate extra economic surplus from the periphery by means of unpaid and underpaid labor, expropriation of natural resources, and the externalization of costs. Based on this framework, he was able to encompass numerous forms of expropriation, rooted in gender, race, class, and imperialism, extending beyond the more visible forms of capitalist exploitation, which he associated with “bright value.” A key article on “The Core of the Apple: Dark Value and Degrees of Monopoly in Global Commodity Chains” (Journal of World System Research 20, no. 1 [2014]: 82–111) interrogated the global role of Apple Inc. His work on dark value can be found online in “Surplus Drain, Monopoly and Dark Value in the Modern World-System: Published Work.” For more information on Clelland and his life accomplishments, see his obituary on the Click Funeral Home website.

At the end of the first full paragraph on page 35 of the May 2021 issue of Monthly Review, in “Five Characteristics of Neoimperialism: Building on Lenin’s Theory of Imperialism in the Twenty-First Century” by Cheng Enfu and Lu Baolin, the debt in the international credit market is noted to have gone from $11 billion in 1987 to $48 billion twenty years later. These should read trillion.