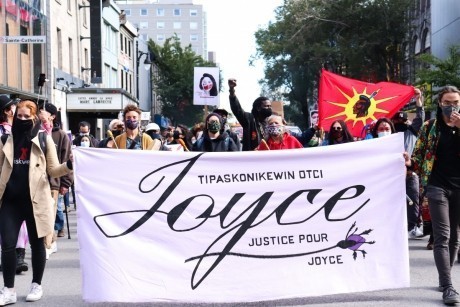 On Friday October 1st, the day after the first National Day for Truth and Reconciliation, came the coroner’s report into the death of Joyce Echaquan, an Atikamekw woman who died in a hospital North of Montreal in Sept 2020 after capturing on her phone the racist abuse and improper medical treatment she received.

Her death sparked outrage and protests in Quebec with calls to recognize systemic racism. The coroner agreed, concluding that the racism Joyce Echaquan faced in hospital contributed to her death and that the Quebec government must recognize the existence of systemic racism within its institutions.

In a media conference to respond, Quebec premier Francois Legault, leader of the CAQ, which has consistently refused to acknowledge the existence of systemic racism of any form in Quebec, went to unbelievable lengths to distance himself and his government from the report. In admitting that the coroner’s report was “very clear” he went on say that what it meant was “prejudices,” “discrimination” and “racism” but which were all somehow not the same thing as “systemic racism.”

To make his case, he quoted a definition of “systemic” from his “Petit Robert” pocket dictionary as “relating to a system as a whole” and for him that means something that comes from the top – as opposed to employees, in some cases groups of employees, and maybe, sometimes, a few individual managers that have discriminatory approaches.

The two orderlies who were caught on video hurling racist abuse at Joyce Echaquan were fired. But Legault is hiding behind this to escape the argument about what systemic racism really is. The healthcare providers responsible for Joyce Echaquan’s death by acting on racism, whether they be orderlies, nurses or hospital directors, cannot be separated from the systemic racism that produced a situation that likely will occur again.

“Systemic” means the government and the state at all levels, including the police and military. It means the direction of public institutions like hospitals and schools, and ultimately private workplaces and services. It means the whole history of colonialism and the way it shapes the system of the present. Those who whip up ordinary people to whitewash that terrible history and deny its systemic impact on the present, and then throw them under the bus to save their own skins, should not be able to hide behind a creative interpretation of the dictionary.

This is exactly what Legault is doing, and worse, his efforts are feeding the growth of the far-right in Quebec. While he pays lip-service to grief over residential schools, he places it on the federal government and not on the structures within Quebec that ran the very same schools at 11 sites. If searches of these sites proceed, they are likely to unearth the same horrifying evidence.

And no matter how many crocodile tears he sheds, his government’s actions show differently. His is the only one currently contesting federal Bill C-92 which proposes to transfer control of youth protection from the provinces to First Nations. And in the same breath as expressing sympathy with Indigenous families he refuses to adopt government reforms that would improve the treatment of Indigenous people in Quebec today on the basis that they mention systemic racism.

The toppling of statues has been emblematic of the fact that those to blame are those who have led, and the demand to defund the police as an institution undercuts the argument that the only thing wrong with policing is the “bad apples” on the force – just as the racism embedded in the healthcare system cannot be reduced to the firing of two orderlies, as much as their individual racist acts must be denounced.

Back in October 2020, in the wake of Joyce Echaquan’s death, the progressive Quebec thinktank IRIS published the first part of a series called “Des solutions systemiques au racisme systemique en sante et services sociaux” (“Systemic solutions to systemic racism in healthcare and social services.)” It cites the open letter by 37 Indigenous women asking Legault to recognize systemic racism. As they emphasize, his refusal is due to what it would require to completely transform the justice system, the school system, and the healthcare system.

Legault should check his dictionary again and look up “systemic solutions.” That definition might come in handy as resistance to racism mounts.

Climate justice, jobs and peace – parts of the same struggle