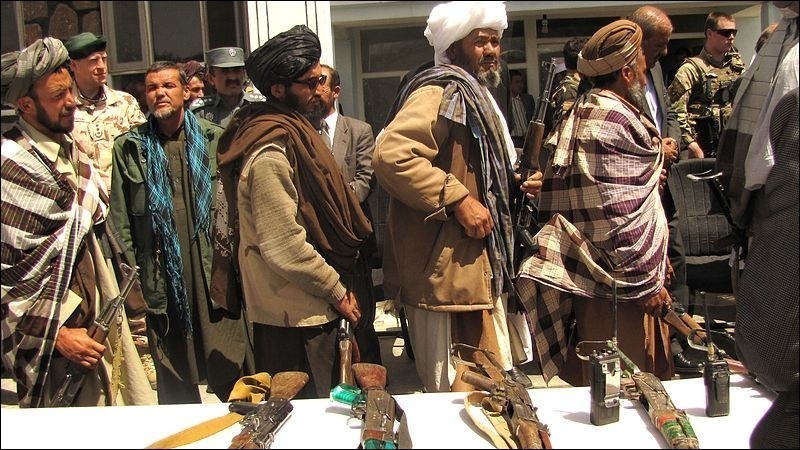 Link to this page: https://www.socialistparty.org.uk/articles/32923 On Sunday 15 August, the Taliban reached the capital of Kabul, forcing the US-backed government of Ashraf Ghani from power. Thousands of residents tried desperately to board planes to flee the hard-line Islamic force. After Ghani fled the country, Taliban fighters took control of the empty presidential palace and abandoned police posts in Kabul. The Taliban released thousands of inmates from the notorious Bagram airbase prison, a hated symbol of western occupation.

After decades of western imperialist military occupation backing up puppet regimes, the capital fell without a battle. Such was the lack of support of the Ghani regime among the population as a whole, and the deep unpopularity of decades of Western troops on the ground.

Clearly, there is no appetite for the return of the rule of the Taliban in Afghanistan by the majority of Afghans. However, the Taliban have exploited the demoralisation of much of the masses at their atrocious conditions, as well as the huge anger at corruption. The hardline Islamists promise to deliver the ‘law and order’ and ‘security’ which is yearned for by so many.

The fall of Kabul is a devastating blow for the US, and for all the powers grouped under Nato, which invaded Afghanistan in 2001. It is a humiliating debacle for western imperialism. The television images from Kabul blows away the idea, carefully promoted by capitalist ideologues since the collapse of Stalinist regimes in the former Soviet Union and eastern Europe, that US military power was unstoppable and could impose a “New World Order” everywhere. The ‘nation building’ plan for Afghanistan lies in ruins, as the Taliban return to power just short of the twentieth anniversary of the 9/11 attacks.

For weeks, the Taliban captured swathes of Afghanistan, facing little resistance. The Afghan national army was not prepared to fight and die for the very unpopular and repressive Ghani regime. Like all institutions under the US’s puppet regimes, the Afghan army was riddled with graft and corruption. In many cases, soldiers were semi-starved and had only low stocks of armoury and ammunition.

Warlords made deals with the advancing Taliban and did not rally to the “lost cause” of the beleaguered Ghani government, even in the traditionally anti-Taliban north of the country.

Fear and terror in Kabul

With the arrival of the Taliban in Kabul, fear and terror has gripped many residents. When the Taliban last ruled Afghanistan from 1996 to 2001, they imposed their strict interpretation of Islamic law, which entailed banning women from being educated or working, stoning women accused of adultery, carrying out public executions and cutting off the hands of accused thieves.

In the period running up to their victory, the Taliban have indicated they will “moderate” their rule. One of their senior leaders, Mullah Baradar, declared they are in discussions with “other Afghan leaders” over the formation of an “open, inclusive Islamic government”. Mullah Baradar admitted that “we reached victory that wasn’t expected…now it’s about how we serve and secure our people and ensure their future and a good life to the best of our ability”.

How much this is merely convenient propaganda by Taliban leaders remains to be seen. “At the start of this transition [to power]”, the veteran correspondent Patrick Cockburn comments, “it may be in the interests of the Taliban to show a moderate face and not stir up opposition at home or abroad by public executions and beatings” (Independent, London, 16/08/21). Yet even a supposedly ‘moderate’ Taliban regime will be deeply reactionary and oppressive towards women and others.

The Taliban will most likely want to avoid direct clashes with western imperialism as they consolidate their rule. Their lightning victory does not mean the Taliban has deep roots and universal support throughout the country. Afghanistan is made up of various ethnic and tribal groups, including Tajik, Uzbek and Hazara peoples, and the Pashtun, from which the Taliban draws mosts support. The Taliban will have to try to reach agreements with many of these groups if it is to stay in power. If they fail in this aim, the way could be open for renewed conflict and another round of bloody civil war, with the country possibly breaking up.

The western powers are now desperately scrambling around in response to the Taliban’s coming to power, trying to find if there is any modus operandi they can have with the new rulers in Kabul. After all, they count the repressive Saudi Islamic regime as an ally. Since Trump made his ‘deal’ with the Taliban, and Biden announced the full departure of all US forces by 11 September, the US had pushed for an agreement by Afghan parties, involving the Taliban, during failed talks in Doha. Clearly, the western powers can live with reactionary, anti-women and anti-working class Islamic regimes, such as their close allies in the Gulf states, as long as they do not stand in the way of their vital interests regionally or globally.

The “war on terror” was merely the pretext for the imperialist invasion of Afghanistan in 2001. After all, the creation of Al Qaeda arose from the US’s backing of the Mujahedeen fighters against Soviet Union forces in Afghanistan during the 1980s. The occupation of Afghanistan by Western forces in 2001 was a crucial part of the efforts by the US, and other ‘coalition partners’, like Britain, to enhance their influence and control of Central Asia.

The Taliban’s victory will have far-reaching repercussions in the region. An immediate effect can be a new wave of refugees which can destabilise the neighbouring countries and will eventually affect Europe, as well.

The Taliban’s assumption of power is a boon for Pakistan’s military and intelligence services which have very close ties to the Taliban. For decades, Pakistan served as a base for Taliban leaders. However the Pakistan government will now be faced with a destabilising and unpredictable regime on its borders.

China and Russia will be glad to see the back of western forces from Afghanistan. The Taliban have assured the Chinese and Russian states that their embassy staffs are safe in Kabul. But both China and Russia will fear that a Taliban-run Afghanistan can act as an impulse to secessionist Islamic minorities in their countries and spur on domestic terror attacks by Islamic terror groups.

While the events in Kabul represent a serious blow to the prestige and influence of the US, Nato and western imperialism, the working class and poor of Afghanistan are left with the dire consequences of decades of occupation and now the return of the Taliban. There is nothing remotely progressive about the Taliban or the warlords and tribal and ethnic leaders with whom the Taliban will try to find agreements in order to rule.

The CWI has always argued that independent self-organisation and action of the working class is essential in Afghanistan. This entails building mass organisations of the working class and poor, with a programme for fundamental socialist change, that struggle for power to end the nightmare of wars, invasions, poverty and oppression.