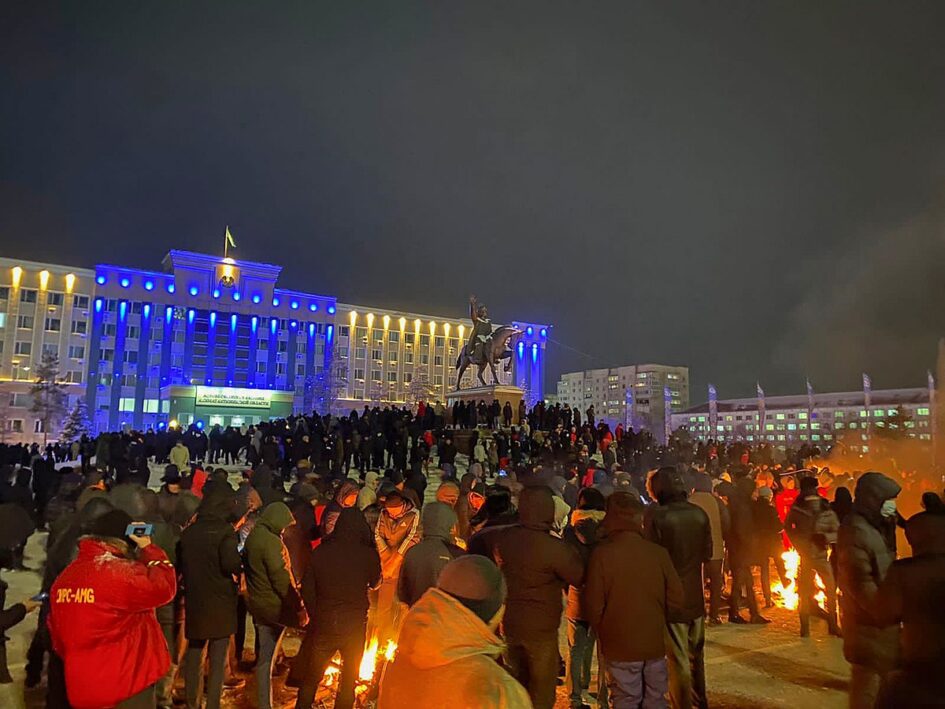 An explosion of anger has spread across Kazakhstan in the first days of January 2022. The spark was a doubling of the price of Liquefied Natural Gas – the most common fuel used in the country. A state of emergency at least until January 19th has been announced in the second largest city, Almaty, (where the mayor’s office was stormed) and in Mangistau. Night curfews from 11.00pm to 7.00am have been imposed.

All roads leading to the centre of Astana (now called Nur-sultan) were immediately closed off with government forces erecting barricades to prevent any demonstrations or occupation in the central areas of the capital. Reuters reported that in the country’s largest city, “Thousands of protesters were pressing ahead towards Almaty city centre…after security forces failed to disperse them with tear gas and flashbang grenades”. There were attacks on banks, shops, restaurants and government buildings reported in many other citie, including Shymkent and Taraz in the South.

Buildings have burned. Water cannon and stun grenades have been used against demonstrators. Hundreds have suffered preventive detention and others still face brutal arrest on the streets. The usual lies about foreign provocateurs and extremists are peddled in the media.

There are reports that strikes broke out, including in the town of Zhanaozen. It is just ten years since the December 2011 slaughter by state forces of striking oil-workers in that city and memories on both sides are still raw.

President Kasym-Žomart Tokayev, whose strings are clearly pulled by his predecessor, Nursultan Nazarbaev, has summarily dismissed what has been a feeble puppet government. He has announced the reversal of the fuel price rise from 120 tenge back to 60 per litre, indicating the fear of the present regime that a revolt could broaden into a movement to bring it down.

And the blood is up!

Kazakhstan is a country the size of Western Europe bordered by both China and Russia. China has big industrial and trade interests in the country. (A plant where workers are said to have taken strike action this week is a Chinese Joint Venture.) There is some speculation about a movement of troops by Putin to intervene in defence of Russia’s economic and political interests on the pretext of defending the more than 4 million ethnic Russians in the country.

Nazarbayev has effectively run a dictatorship in Kazakhstan since before the break-up of the USSR in December 1991. The octogenarian has remained the power behind the throne to this day and No 1 target of the protesters shouting: “The old man must go!”. “We have had thirty years of his shameful dictatorship and gained nothing!”.

The mood developing in the country is reported to be moving from protesting about price rises to demanding the resignation of local governors and democratic representation. Even last year, an Azatiq blogger, talking to strikers in the Zhanaozen area, wrote: “Some of the protesters … were calling for the people to have the right to elect their local leaders…A group of deputies from the pro-government Nur Otan and Ak Zhol parties came to speak with the workers. They told them, ‘We are deputies whom you elected’, to which the striking workers replied, ‘You were named for your posts; the people did not elect you’.” (Bruce Pannier)

So far, concessions are not calming the mood. Nor are the injuries and arrests of hundreds of demonstrators. Many protesters have refused to relinquish the squares they occupy and have erected tents and stayed put overnight in the freezing cold. In some areas, police have been seen to openly refuse orders to attack.

There is a movement taking place that could develop into a reckoning with the ruling layers. Workers and youth should be aiming to replace them with a democratically elected government of workers’ representatives.

In the present situation, protesters need to link up in committees of struggle, involving workers and young people prepared for a fight to the finish. They need to democratically elect representatives to such committees on a local level who can then link up on a regional and national level. This situation clearly poses the question of who runs society and the need for workers to have their own party to pursue an alternative to dictatorship and poverty.

Nazarbayev and Tokaev could be forced out. But workers’ organisations should not be part of any coalition with pro-capitalist parties, including those headed by opposition oligarchs but also self-proclaimed liberals.

The fight must be stepped up for all democratic rights to be established and respected – freedom of speech and the press and the right to protest, to strike and organise opposition parties without state interference. Working people need to fight to the end to eliminate totally the dictatorship of capital – be it Kazakh, Chinese, Russian or anything else – and fight for genuine socialism.

The CWI will, as always, will do everything possible to defend and protect activists fighting the present regime in Kazakhstan including demanding their release from detention by the state. We  look to a future confederation of socialist states in the region and world-wide.