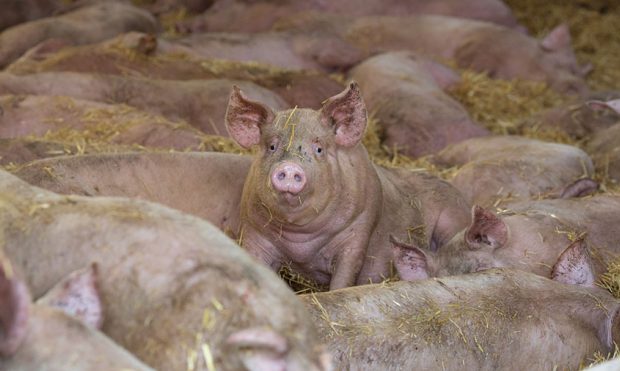 Seventy thousand pigs are currently stuck in British farms, waiting for a truck to come and ferry them to a slaughterhouse. Every week another 15,000 pigs come to join the queue. But the truck doesn’t turn up in time. Why? Because there are 90,000 fewer HGV drivers than are needed to join up all the dots in Britain’s supply lines. (UK rejects industry plea for visas for EU truck drivers by George Parker and Sylvia Pfeifer, Financial Times, 22 August 2021)

And if the pigs do make it to an abattoir, they will be in for a long wait. Why? Because slaughterhouses are only running at 75 percent capacity. Why? Because there are 14,000 vacancies for meat processors than can be filled.

Such is the madness of capitalism that pig farmers may be forced to destroy thousands of perfectly good pigs, adding to the obscenity of food waste in the midst of food poverty. Meanwhile, shoppers are baffled by the reappearance of empty supermarket shelves on a scale not seen since the first lockdown. (Prisoners to plug worker shortage in meat industry by Michael Race, BBC News, undated)

And of course it’s not only pig farmers who are in desperate need of trucks. Lorries are the essential lubricant to keep supply lines working smoothly. That being the case, it would be simple common sense to have a national plan for lorry transport under which forward provision could be made for the supply of trucks and trained-up drivers adequate for forecast need.

But this is capitalism, a system in which common sense has no place. Instead, we have supply lines thrown into chaos by exposure to market forces beyond anyone’s control, a transport system that relies upon the willingness of drivers to submit to being underpaid and overworked, and a failure to organise enough apprenticeships to meet training needs.

For years, bosses have relied upon the ready availability of drivers from eastern Europe prepared to tolerate low pay and poor working conditions. This served a double purpose, plugging a gap in the workforce whilst helping to depress wages and conditions for drivers living in Britain.

The government could hardly be unaware of the exodus of drivers returning to Poland, Lithuania and elsewhere, an exodus also affecting France and Germany, though in Britain’s case accelerated by Brexit.

Some 25,000 migrant workers have gone back home, and it is estimated that the overall shortfall is around 90,000. Add to this the labour shortages in food processing, hospitality and construction (also in part triggered by reverse migration) and you have the makings of a perfect storm.

So what does the government propose to do about this emergency?

Belatedly, the government has started mumbling about “plans to streamline the process for new drivers to gain their HGV licence and to increase the number of tests able to be conducted”. This sounds very much like policy made on the hoof, lowering the bar on training standards and prematurely unleashing rookie drivers on the motorway. (Financial Times, op cit)

Worst of all, the government’s strategy is to relax the rules governing the length of time drivers can spend behind the wheel, thereby exposing drivers to even greater levels of stress and fatigue. Raising the daily drive-time quota from nine to ten hours plus two eleven-hour shifts per week is like trying to pour a quart into a pint jug, with overworked drivers already regularly forced to sleep in lay-bys.

As regards the labour shortages in food processing, the only solution suggested by the trade body representing butchers and meat processors is to badger HM Prison Service into letting it borrow prisoners for work under a scheme that allows prisoners out to work on temporary day release. This must surely be the ultimate capitalist fantasy: a completely captive workforce.

Predictably, there have been pleas from big business, so far resisted by the government, for special work visas to be offered to tempt back migrant workers. But instead of trying to unpick Brexit, restoring the ‘free movement of people’ (free, that is, to be shunted about the world to furnish a supply of cheap labour), the bosses should concentrate on improving workers’ wages and conditions.

After all, within the overall national context of low real employment rates, this temporary anomaly of labour shortages in certain areas of the economy creates a golden opportunity for workers to seek redress for years of seeing their work undervalued.

Workers should strike while the iron is hot.