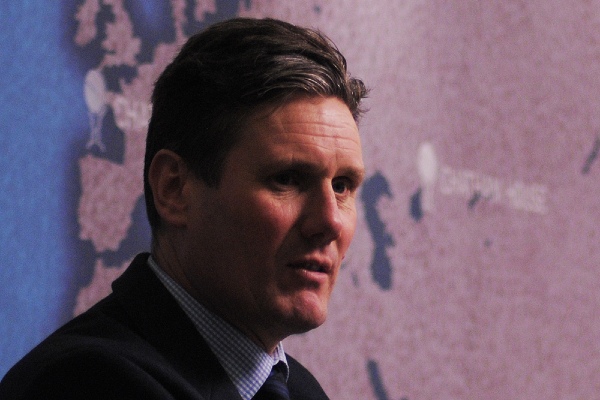 Labour leader Keir Starmer has defended the Western invasion of Afghanistan and called for further Nato military alliance action to “apply pressure on the Taliban”.

Speaking in an emergency sitting of parliament on Wednesday, he said the actions of British troops were “not in vain”. “You brought stability, reduced the terrorist threat and enabled progress,” he said.

“We are all proud of what you did.”

Such lies echo the false claims used to launch and sustain the war. As more and more people abandon these fictions, Starmer loyally boosted them.

Western imperialism has suffered a grievous blow in the last few days, but Starmer is playing the usual role of the Labour Party and rushing to defend it.

He went on to speak of “the gains through 20 years of sacrifice” and called the corrupt puppet Afghan government a “fragile democracy”.

His main criticism of the Tory government was its incompetence. And that it had not acted swiftly enough to maintain Western control in Afghanistan when the US said it was going to leave.

Starmer added there should now be a push to “stamp out a resurgence of terror groups” and “to retain the liberties and human rights of Afghans”.

That is a green light to military action, such as bombing by the US from nearby countries.

During the debate several Tory MPs came up with fantasy plans for new military coalitions to combat the West’s enemies without relying on the US.

Tom Tugendhat attacked US president Joe Biden. He said, “We can set out a vision for reinvigorating our European Nato partners, to make sure that we are not dependent on a single ally, on the decision of a single leader.

“That that we can work together with Japan and Australia, France and Germany, with partners large and small and make sure we hold the line together.”

Such visions of an aggressive European military force are vicious. But they ignore the shattering effects of the US defeats in Iraq and Afghanistan.

At a Stop the War protest outside parliament at the start of the debate, Labour MP Zarah Sultana slammed the West’s record in Afghanistan. She said it was “over 240,000 dead, millions displaced and the entire region has been put into decades of instability”.

But such voices are very much a minority from the Labour benches.

Let in all the refugees

This will accept just 5,000 Afghan refugees in the first year. There is vague talk of 20,000 refugees over the “long term”, but there are no details for this.

Johnson said the government would not “allow people to come from Afghanistan to this country in an indiscriminate way”.

“We must make sure that we look after our own security,” he said.

The only demand that makes sense is to let in all those seeking refuge. But the Tories, who until this week were deporting refugees to Afghanistan, will try to let in only the smallest number. And they will favour those who worked for the British military and the puppet government.

Other governments are also closing their borders.

His regime is constructing a 150-mile concrete wall, topped with barbed wire and surrounded by trenches, along its frontier with Iran. Tens of thousands of Afghans are reported to be massing on the Iranian side.

Until 2013, Turkey resettled Afghans in third countries, mostly in Europe and countries such as Canada. That ended when EU member states declared Afghanistan safe because of the Nato presence.

And president Emmanuel Macron said France should have a robust plan to “anticipate and protect itself from a wave of migrants” from Afghanistan.

He is making a disgusting attempt to grab the votes of those attracted by the fascist Marine Le Pen. And by doing so he concedes and builds the racist lies.