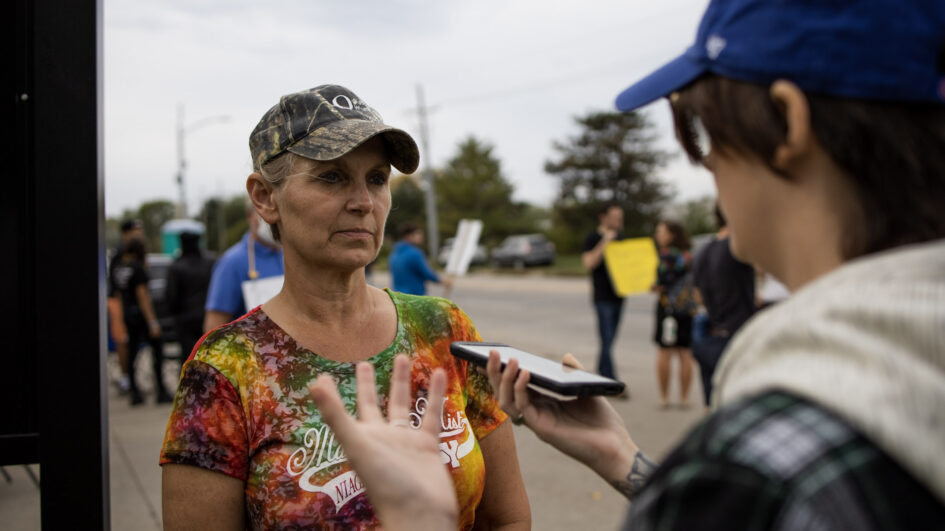 “I barely get to see you,” Emma Gbuchta, 9, said to her father as they stood together on the picket line last weekend outside the Kellogg’s cereal plant in Omaha, Nebraska. She carried a hand-made sign with the words “‘Essential’ Workers” in rainbow lettering and spoke about how little time she spends with her father during the year. “Work has taken up most of the time, so I don’t really get to see you a whole lot every day. That’s why I wanted to come here,” she said.

Emma was just one of many children of all ages standing with their parents on the picket line last weekend. Stephany Perez-Vergara also came out to support her mother, who has been employed at the plant for about a year. “I don’t really get to see my mom much,” she said. “It’s hard not to see your mom every day.”

Workers at the Omaha Kellogg’s plant, represented by the Bakery, Confectionery, Tobacco Workers and Grain Millers International Union (BCTGM), went on strike on Oct. 5 along with Kellogg’s plant workers in Battle Creek, Michigan; Lancaster, Pennsylvania; and Memphis, Tennessee. On the Omaha picket line last weekend, workers spoke of punishing schedules with little to no time off and a punitive attendance-based point system that discourages workers from calling in sick. Workers at the Omaha plant have logged upwards of 3,600 hours per year at the plant, working every day of the week for months on end. To keep the plant running continuously, they are scheduled seven days a week, 12-16 hours per day, often working mandatory overtime. “It’s hard on you,” said Stephanie Sterling, a sanitation department worker with 35 years of tenure at the plant. “It’s hard on your work-life balance, it’s hard on your body physically and mentally.”

In recent days, Kellogg’s corporate spokespeople have touted their “industry-leading level of pay and benefits” for the “majority of employees working under” what they refer to as the “Master Contract.” In a statement to the media released on Oct. 5, the company claimed “The average 2020 earnings for the majority of hourly RTEC employees was $120,000.” These figures seem to have been presented both as proof of Kellogg’s compensatory generosity and evidence discrediting the union’s demands for a higher wage for transitional workers. However, Kellogg’s workers want the public to know that there’s a lot of unspoken context behind those figures. The strikers on the line at the Omaha plant clarified that those wages were only possible because they work the unceasingly long hours that they do. One striker I spoke with, who normally works the night shift, told me that his first day off since July was the first day of the strike. He had been working every day for three months straight.

The job can be dangerous, too. The machinery at the plant has caused a number of injuries to workers over the years, including an injury that happened recently where a worker got both arms caught in a conveyor belt. The potential for injury in the plant is a fact that most of the workers I spoke with said just comes with the territory—it’s part of the job. Despite all of this, they come to work each day and do the job without complaint. One thing that was abundantly clear from talking to striking Kellogg’s workers is that they are proud of the work they do to help feed families across the United States. For them, this is a serious business that they take seriously—they approach their work with professionalism, and they understand the value of their experience.

What they are asking for is the recognition and respect they feel they have earned from the corporation. “We’re fighting for good benefits, but we definitely deserve the good benefits because of how much we sacrifice,” said Greg Gbuchta as he stood with his family at the picket line outside of the plant. “You know, equal pay for all. We’re all working the same amount of hours, same exact work. We all deserve the same amount of pay and benefits.”

In 2015, the company introduced a tier system that divides employees into one of two categories. The lower tier, called a “transitional tier,” is staffed by newer employees and does not offer the same wage and benefits upper-tier workers get. According to BCTGM Local 50G president Dan Osborn, who has worked at the Omaha plant for 18 years, roughly 90% of the new hires in recent years, all of whom have been funneled into the “transitional tier,” have been Black men and women who are making $12/hour less than their “legacy” counterparts. The 2015 contract negotiated by the union capped these transitional workers at 30% of the workforce. The theory was: As upper-tier “legacy” workers retire, transitional workers would then move up to take their place. As many of the workers see it, that simply hasn’t happened. “Corporate doesn’t want to ever give the opportunity to those transitional [workers] to ever make what they’re supposed to be making [while] working extended hours,” said Mario Gutirrez, an electrician’s apprentice with seven years of tenure at the plant. “We’re trying to keep food on the table for all of our families.”

For the workers at the Omaha plant, the cereal giant’s refusal to negotiate a fair contract is evidence of their corporate greed. “The company saw record profits from COVID,” Gbuchta said. “And they’re still trying to take from us. The company wants to make it out like we’re asking for the world and we’re really not. We’re just asking for equal pay for everybody that works in the plant side-by-side.”

“Kellogg’s reported a profit of $1.25bn in 2020,” Michael Sainato reported in The Guardian. “Cereal sales grew more than 8% in 2020 due to increased demand during the pandemic. The company approved a stock buyback program in February 2020 through December 2022 of $1.5bn. The CEO of Kellogg’s, Steven Cahillane, received around $11.6m in total compensation in 2020.”

The response to the strike has been encouraging for the Omaha plant employees. They’ve received messages of solidarity from a number of other trade unions in the city and packages of food, water, snacks, and meals show up to the line frequently. Last Saturday, a number of activist groups joined the picket for a couple of hours during the day shift, serving spaghetti to the strikers at each entrance. They came back around during the second and third shift to do the same. Workers have also received donations to their local strike fund, which they say is vital for sustaining the strike as they are relying heavily on their personal savings and a meager stipend from the international BCTGM strike fund. Solidarity is quite literally their lifeline.

Tevita Uhatafe, an American Airlines employee and shop steward for his air transport union local (part of the Transport Workers Union), flew in from Dallas, Texas, on his day off to stand on the picket line for the day. He did the same to support striking Nabisco workers in Portland and Chicago, and he plans to join the line at the Memphis Kellogg’s plant if the strike continues in the next couple of weeks. “Our solidarity is our true strength,” Uhatafe said. “One of the important things about being a trade unionist is supporting each other in the good times and in the bad times.”

This week, the company has begun to bus in scabs to get the factory back up and running, with the first shifts of workers coming through the line early in the morning on Monday. Many of the workers expected this to happen. Their main concern is the reduced quality of the product and the potential for serious injury inside the plant. “People with lots of tenure there sometimes struggle to run the machines,” Gbuchta said. “People fresh off the streets with no experience with those machines—good luck; I hope nobody gets hurt or killed.”

For Gutirrez and many of the other workers standing on the line in Omaha, this fight extends far beyond a single contract negotiation and represents a struggle known all-too-well by the working class. “For everyone in our class—we all have kids, we all have families that one day want to have a good living for their families, and this is the only way we’re going to accomplish it: by standing up for each other and not letting the big dogs try and break us down and stomp on us.”

Kellogg’s workers on strike in Michigan