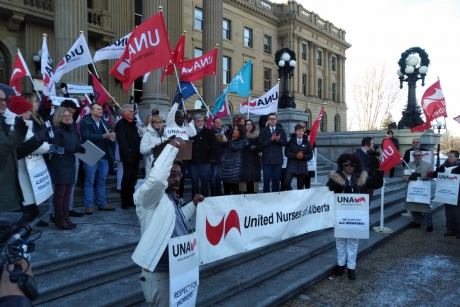 Having declared the pandemic over and canceling all public health measures, Alberta premier Jason Kenney has returned to his first preoccupation: destroying public health.

The precondition for privatizing healthcare is to undermine the wages and working conditions of public health workers, provoking them to leave their profession. The resulting crisis in hospital capacity creates the opening for profiteering and privatizing.

Readers should recall that Kenney began dealing with the COVID emergency by cutting $500 million from the health budget and demanding a 5% wage cut for nurses. Resulting outrage and pushback forced him to rescind both cuts – temporarily.

Now that the emergency is declared over (it is far from over, but that is another story) the demands for wage cuts from health workers are back – but this time Kenney is attacking workers with less visibility and public support than nurses.

Tellingly, this government that used rhetoric about mental health to justify dropping health mandates is now demanding a 10.90% wage cut for Social Workers.

Kenny is entering the last year of his mandate and all the polls show him trailing the NDP by a wide margin. The temptation for labour will be to bite their lip and wait for an NDP government to restore their wages. That would be a fatal error. Even if Rachel Notley’s NDP does form the next government – and there are no guarantees – it will be extremely difficult to get the genie of for-profit healthcare back in the bottle.

Privatization has to be exposed and fought here and now.

The Military and Intelligence Origins of Public Health

The Horgan government’s priority must be public health, not corporate profits