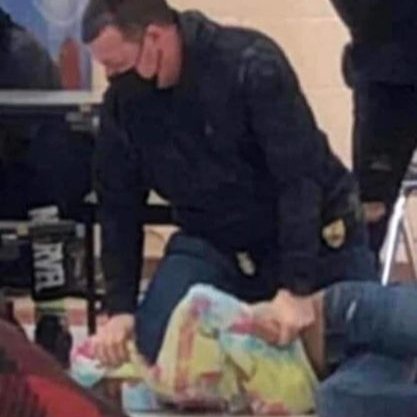 On March 4, in Kenosha, Wisconsin, off-duty police officer Shawn Guetschow kneeled on a 12-year-old girl’s neck in order to break up a fight at Lincoln Middle School. Guetschow, who was working part-time as a security guard, was able to resign from his role at the school on March 15 while remaining employed with the Kenosha Police Department.

The footage of the incident has been made available to the public, clearly showing Guetschow violently exerting unnecessary force on a minor for more than 20 seconds. Although Wisconsin banned chokeholds following George Floyd’s murder, neck restraint tactics that have the same effect as chokeholds can still technically be used.

“Officers are not trained to de-escalate situations that arise among students,” Milwaukee education activist Angela Harris told Liberation News. “His training as a police officer is what resulted in his knee ending up on the neck of a 12-year old.”

The girls’ father, Jerrel Perez, vowed during a press conference to take legal action against Guetschow. “She’s humiliated … she’s traumatized … every day I’ve got to hear, ‘Daddy I don’t want to go to school,’” Perez said during the conference.

Cops do not make schools safer. They are enlisted to respond to crises or conflicts that they are not qualified to handle. Their presence leads to more arrests and suspensions that disproportionately target Black and Brown kids, fueling the racist school-to-prison pipeline, according to the ACLU. Additionally, a study conducted by the nonprofit education news organization Chalkbeat found that the presence of more cops in schools was linked to lower graduation rates and lower college enrollment rates.

Harris continued, “Police presence in schools have not been proven to have any direct impact on reducing behavioral incidents. Students need support and resources, access to trauma support professionals and mental health professionals, guidance counselors, social workers, and restorative justice practice and policies.”

All progressive and revolutionary people should support the call for Guetschow to be fired from the KPD and brought to justice for using inexcusable violence against a minor, as well as for the Kenosha Unified School District to end their contract with the KPD and to get cops out of schools.