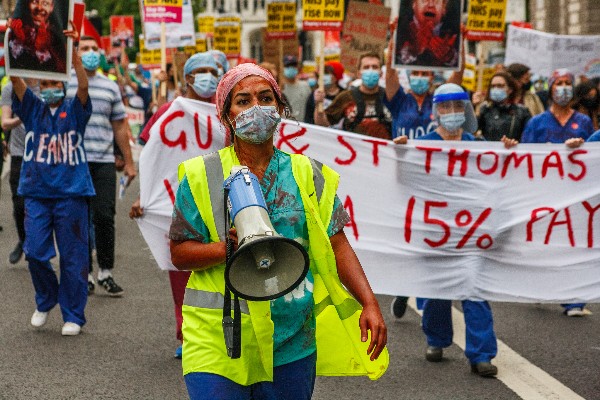 The average chief executive officer (CEO) of one of Britain’s top firms is paid £2.69 million.

A new report from the High Pay Centre (HPC) shows that this is 86 times the pay of an average full-time worker in Britain.

Pascal Soriot of AstraZeneca was the highest earning CEO, grabbing £15.45 million, ahead of Brian Cassin of Experian who trousered £10.3 million.

The analysis looked at FTSE 100 companies, the 100 businesses listed on the London stock exchange with the highest market worth.

The report found that 22 of these companies had used public funds through loans, grants and the furlough scheme during the pandemic.

It says, “The mean pay for the CEOs of these companies was £2.36 million. However, many furlough recipients have subsequently announced that they intend to repay the public money they have received. This still equates to an effective government loan during a period of uncertainty.

“As many companies have been secretive about their use of support schemes, it is difficult to establish which companies have received support, and what kind of support. Based on enquiries to the companies themselves, and their statements to the stock market, we estimate that nine of the 22 have not repaid the furlough money.

“The mean CEO single figure for these companies was £2.39 million.”

The nine include JD Sports, Rentokil, Next, Rolls Royce and Whitbread.

The GMB union said the average FTSE 100 chief executive pay deal of £2.69m was as much as a key worker could expect to earn in their lifetime.

“The pandemic has highlighted the massive inequalities that exist in our society,” said Gary Smith, the GMB general secretary.

“If this government is serious about a levelling up agenda, ministers must make sure our NHS and local government workers get a proper pay rise – while legislating to close the obscene pay gap in the private sector.”

Throughout the Covid-19 crisis, many low paid workers in industries affected by the shutdown, such as travel, leisure and hospitality have faced layoffs, job cuts and loss of income. Others, including carers, cleaners and porters, supermarket workers, delivery drivers and refuse collectors, have played a critical role to keep society functioning, at heightened risk of infection.

And government handouts have enabled large businesses, including FTSE 100 companies, to continue operating, through the provision of public money.

That hasn’t stopped the bosses of those firms grasping huge pay packets.

The average is actually down from last year, but that does not represent any hardship for those at the top.

The HPC says, “Very high CEO pay reflects a wider gap between rich and poor in the UK than in most other European countries.

“The inequalities exposed by the pandemic and the volume of public money used to protect large businesses could strengthen the argument for measures to contain top pay and re-balance extreme income differences.”

That’s to put it mildly. What sort of society pays bosses 86 times more than a nurse and 200 times as much as a cleaner?

The answer is a capitalist one where profit comes before human need. Exploitation of workers creates Jeff Bezos with his wealth of $200 billion—£146 billion—and the super-rich in Britain.

Their wealth needs to be seized for the interests of the whole of society. And we need to fight a system that produces such inequality.