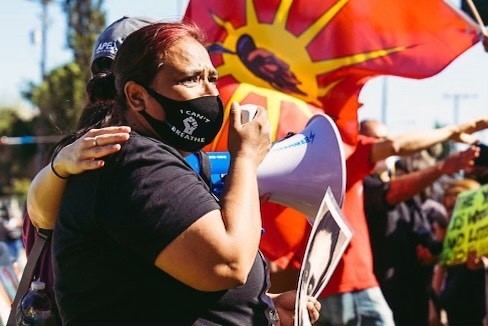 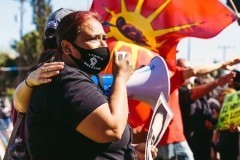 Los Angeles, CA – After one day of deliberations, on January 18, Long Beach killer cop Martin Ron was unanimously found guilty of negligence for the murder of Cesar Rodriguez. On August 29, 2017, Ron and another Long Beach police officer stopped Rodriguez because he had failed to pay the $1.75 metro fare. Cop Ron then pushed Rodriguez onto the metro train tracks and an oncoming train pinned Rodriguez. For more than 20 minutes Rodriguez held on until he succumbed to his injuries and died on the scene. Rodriguez was 23 years old when he died.

Today’s jury decision was uncommon, as killer cops and their powerful attorneys persistently character-assassinate the victims and blame them for their own deaths. Phase two of the trial will begin Thursday, January 19. Phase two will allow for the jury to decide upon damages the killer cops make to Rodriguez and his surviving family. The family is being represented by attorney and Chicano Arnoldo Casillas.

Evelia Granados, sister of Cesar Rodriguez, will be taking the stand and testifying. “I feel nervous,” she said, “but confident because my brother was a good person.”

If you too, would like to support Rodriguez’s family, attend the trial. The address is 111 N Hill Street, 5th Floor, Dept 96 Los Angeles, CA 90012. Or donate to their Go Fund Me page here: https://www.gofundme.com/f/justice-for-cesar-rodriguez/

No charges for killer cops: Protests continue in Chicago to demand justice for Adam Toledo and Anthony Alvarez