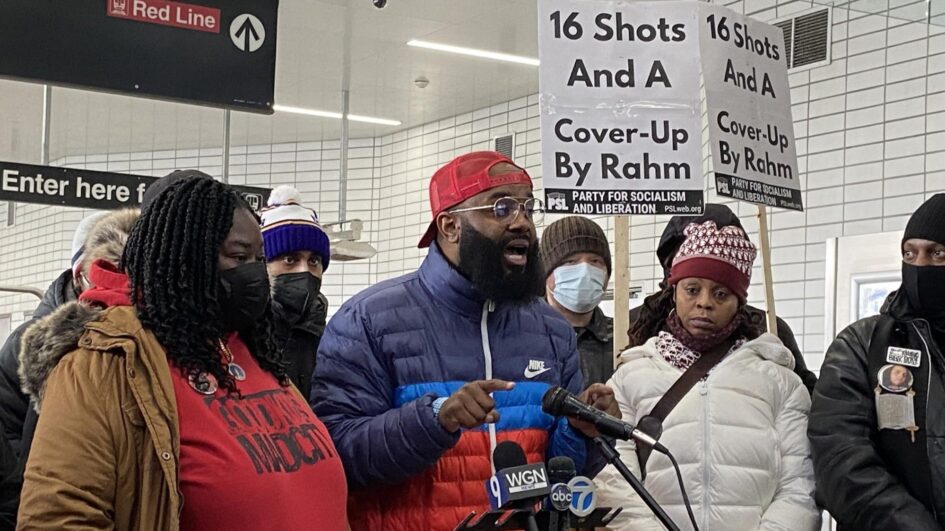 On Jan. 14, WGN News obtained records that showed that killer cop Jason Van Dyke was set to be released on Feb. 3, serving less than half of his already short sentence of 81 months for the 2014 murder of Laquan McDonald. The community immediately mobilized the next day for a press conference to voice their disgust and raise demands for federal and civil charges against Van Dyke.

Community organizers gathered at the 95th Street Red Line stop on Chicago’s South Side, not far from the site of the 2014 murder, to demand that elected officials delay the release of Van Dyke, or press federal and civil charges. The announcement of Van Dyke’s release at the start of Martin Luther King Jr. weekend, was described by many as a slap in the face to the organizers who worked tirelessly to fight for McDonald and get Van Dyke behind bars.

William Calloway, a community organizer who was heavily involved in the movement to lock up Van Dyke, told reporters, “Eighty-one months was not appropriate in the first place. That was a miscarriage of justice.”

The early release of Van Dyke is not only a failure of the justice system, but also a testament to the U.S. capitalist system’s protection of their lethal and criminal police force, which the 2020 uprising highlighted and demanded an end to. Activists contrasted the early release of Van Dyke, who shot 16 times at 17-year-old McDonald and nearly evaded justice through a series of cover ups by then-mayor Rahm Emanuel and the Chicago Police Department, to people serving longer sentences for non-violent crimes. Rahm Emanuel has recently become the U.S. ambassador to Japan, despite pushback from the community, causing more anger and distrust of the Biden administration.

Organizers also expressed anger with elected officials at their lack of police accountability and inaction in the wake of the news. “This is a slap in the face on top of it being MLK weekend,” said Dr. La’Shawn Lattrice, an organizer with Make Noize for Change. “We are outraged, we are disgusted, we are traumatized, and we are hurt … when all of these people ran for office, they ran on the back of Laquan McDonald. These people got in office because they said they were going to do something different. And we know they lied.”

Patrick McWilliams of the ANSWER Coalition (Act Now to Stop War and End Racism) addressed the crowd, “They just made Rahm an ambassador to Japan. They think we’ve forgotten what he did. He was an accessory to the murder, just like all those people in the Chicago Police Department who covered this up. Just like all the government officials who knew that tape was out there, but refused to release it to the public, who covered up evidence.”

“This is in the spirit of MLK. In 1955 they went and boycott [transit] for a year. We did that for our liberation,” Calloway announced. After the press conference, the group of community organizers went on to flyer the train station, talking to CTA workers about their demands and the news of Van Dyke’s early release.

The coalition of activists plans to continue to put pressure on elected officials to prevent Van Dyke’s release and charge him in a federal and civil lawsuit.

Assange facing extradition to US: where is the outrage?

“You Have To Be A Killer”: Deadly Capitalism in Succession’s World and Ours