KKE and KNE are committed in the struggle against fascism 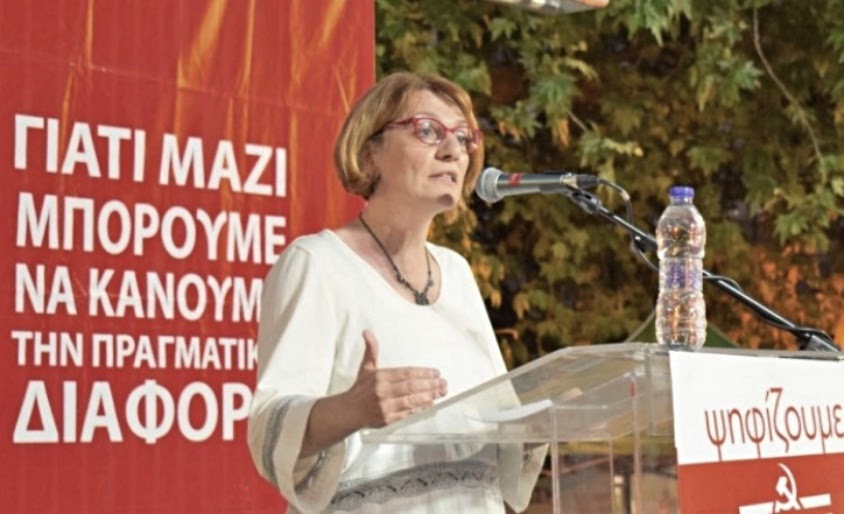 “The KKE and KNE, as they should do, are giving all their forces in the struggle against fascism, being aware of its abominable face, but also knowing that fascism will be irrevocably crushed by the people with their struggle against the capitalist system  which generates it”, points out Theano Kapeti, member of the Political Bureau of the CC of the Communist Party of Greece (KKE) and Secretary of the Party Organization in Central Macedonia, in an article published in “Ta Nea” newspaper.

The article refers on the recent criminal activity of fascist mobs in vocational schools in Thessaloniki, northern Greece. “The unprecedented events of Stavroupolis vocational school’s transformation into a base of fascist criminal gangs and their murderous attacks on pupils, teachers, students and workers, underline the fact that the struggle to defeat the Nazi ideology and practice did not end with the obvious conviction of Golden Dawn in the courtrooms”, writes Kapeti.

The Political Bureau member of the KKE adds: “The broader far-right nationalist space is under the process of reconstruction with the creation of other formations as well (e.g. Kasidiaris’ party) after the conviction of Golden Dawn. They are forces that are used against the organized popular movement, against the KKE and KNE, against each and everyone that resists and concerned in a radical and militant direction. They play their role in disorienting the people from the real cause of the problems which is the capitalist system itself, as it is proved in the case of the pandemic, by spreading irrational and obscurantist perceptions, or in the case of the refugee-migration flows which are the result of poverty and exploitation of imperialist wars”.

Theano Kapeti also stresses out the fact that, currently, Greece has signed military agreements with France and the U.S, thus being involved even deeper in the aggressive and imperialist plans in the region, a policy that fuels the nationalist and racist poison.

The KKE cadre writes that “there is no room for complacency” concerning fascism and adds: “The isolation of every Nazi group is achieved in the workplaces, the neighborhoods, the places of youth, so that this inhuman ideology does not find any space. And for this, the decisive wave of condemnation which was immediately expressed through the decisions of trade unions and students’ associations as well as through yesterday’s mass rally in the streets of west Thessaloniki, is particularly significant”.

In her article, Kapeti mentions the despicable stance of government’s members who tried to equate the criminal actions of the fascists with the activity of the anti-fascist movement. More specifically she writes: “The people’s reflexes against the monster of fascism are in stark contrast to the unacceptable statements and announcements of governmental officials, who tried to equate the criminal nazi gangs with students, teachers and workers that condemned their murderous attacks. A large part of the people are outraged by the tolerance of the school administration which led to the transformation of school into a base for criminal attacks, the tragic negligence and cover by the police forces towards out-of-school elements who aim at terrorizing students, showing racist poison and leading the way in slandering the struggles for education and contemporary rights”.

“The unhistorical and dangerous “two extremes theory”, writes the KKE cadre, which is an official theory of the EU and is being utilized by parts of ND and governmental officials, is collapsing once again in the face of events. Really, is the knife of the fascist similar to the distribution of leaflets, to the free movement of ideas inside and outside of educational places?”.

Theano Kapeti concludes her article with the commitment that the KKE and KNE will decisively continue, with all their forces, the struggle against fascism and the system that generates it.