KKE in EU Parliament: Question about the shameful banning of the Romanian Communist Party 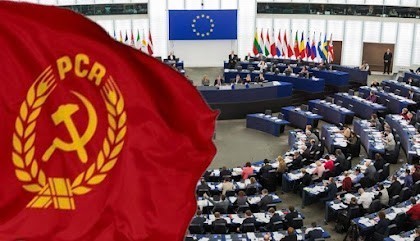 On the 21st of December 2021 the European Court of Human Rights (ECHR) ruled against the registration of the Romanian Communist Party (RCP) thus adopting the preposterous decision of Romania’s national courts according to which “the PCR program and status ignored democratic values and the country’s socio-political evolution after 1989” and “allowed totalitarian (sic) and extremist actions that could undermine national security, posed dangers to democratic values”.
In a written question submitted to the European Commission, the MEP of the Communist Party of Greece (KKE) Kostas Papadakis condemns the above decision. As “Rizospastis” reported, among others, the KKE MEP stresses out in his question:

“This decision escalates the EU’s anti-communist campaign, which with its support in a number of member-states (for example in Poland, Czech Republic, Slovenia), but also in third countries, e.g. Ukraine, seeks to equate communism with the monster of fascism, on the basis of the unacceptable theory of the “two extremes”, the official ideology of the EU, while it bans communist symbols and calls for the removal of monuments, street names of the socialist period.

This operation to criminalize communist ideology and activity targets the action of communists and the working class forces which fight against the EU and bourgeois governments’ anti-people policy, in general against capitalist barbarism. It is the other side of the intensification of repression and record keeping in the name of “public safety”, of the blow towards worker and trade union rights.

Based on the above, how does the Commission position itself concerning the ban on the Communist Party of Romania (PCR) and for the fact that such prohibitions in EU member-states are encouraged by the EU’s official policy, as it has been recorded in her institutions’ decisions?