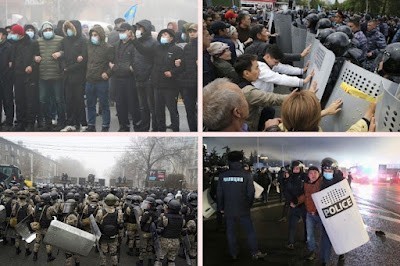 Thirty years after the dissolution of the Soviet Union and the restoration of capitalism, Kazakhstan is in the midst of a large-scale uprising by thousands of people across the country.

In Almaty police fired stun grenades and tear gas at a crowd of several thousand protesters, but were unable to stop them from storming the mayor’s office, AFP reported.

“The KKE welcomes the large workers’ strike mobilizations and popular protests in Kazakhstan against price increases, unemployment, poverty, impoverishment and the other serious social problems that the capitalist system has caused to millions of people, 30 years after the counterrevolutionary overthrow and the dissolution of the USSR.

We express our solidarity to the thousands of workers who, defying the state of  police and repression, took to the streets demanding the improvement of their living standards, expressing their disagreement to the looting of the country’s energy wealth by the monopolies.

– The release of all demonstrators detained by the police, as well as all political prisoners.

– The repealling of all the anti-union, anti-worker laws that have outlawed hundreds of workers’ unions in recent years in an effort to control the trade unionist movement by the government.

– The legalization of the Socialist Movement of Kazakhstan and the Communist Party of Kazakhstan, whose activities have been prohibited by the country’s authorities.”

KKE: Solidarity with Cuba – Imperialist plans will not pass!