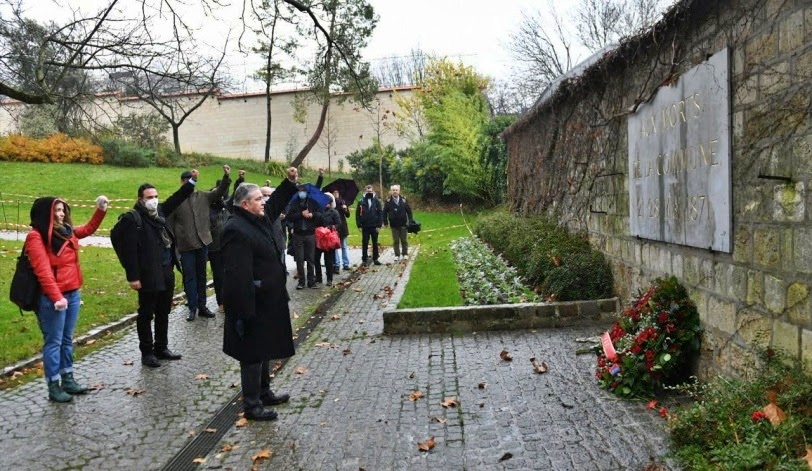 On his 2nd day of visit in Paris, the General Secretary of the CC of the Communist Party of Greece (KKE) Dimitris Koutsoumbas participated in a guided walk “on the footsteps of the Commune”. The walk began from Louise Michel square and continued in Montmartre.

Later on, the General Secretary and a delegation of the KKE visited the “Communards’ Wall” at Père Lachaise cemetery where Koutsoumbas laid a wreath in honor of the 147 fallen combatants of the 1871 Paris Commune. Flowers were also deposed to the graves of the General Secretary of the French Communist Party from 1930 to 1964 Maurice Thorez, communist poet Paul Éluard and communard chansonnier Jean-Baptiste Clement.

At the end of his visit the General Secretary of the Communist Party made the following statement:

“We are here today to complete 2021, a year during which we celebrated the 150th anniversary of the Paris Commune, with many events, publications and activities throughout Greece. We are here in Paris to complete this series of events. We are thrilled to be here where, for the first time in history, the working class “stormed the heavens” and conquered workers’ power – even for 72 days only – but was the forerunner of a new society, a series of uprisings and revolutions which have not completed their circle, because there is still the system of exploitation, the system of economic crises, of the pandemic and the failure to solve the health issue for the people’s benefit. There is still high prices, poverty, unemployment, wars, competitions between states where the people are always the victims.

So, the underground currents of revolutionary activity which are still moving today, in Paris, in Athens, in other European capitals, in all over the world, will continue and the 21st century will be the century of uprisings and new revolutions for the people’s right”.

Tomorrow, 15:00 local hour, Secretary Koutsoumbas will deliver a speech in an event titled “Paris Commune 1871: The glorious harbinger of a new society – Legacies for the modern revolutionary labor movement”. The event will take place at AGECA, 177 Rue de Charonne, 75011 Paris.

Book Review: Rabble! The Story of the Paris Commune

Tribute to the 104th anniversary of the Bolshevik Revolution in…

Lenin and Krupskaya in Paris