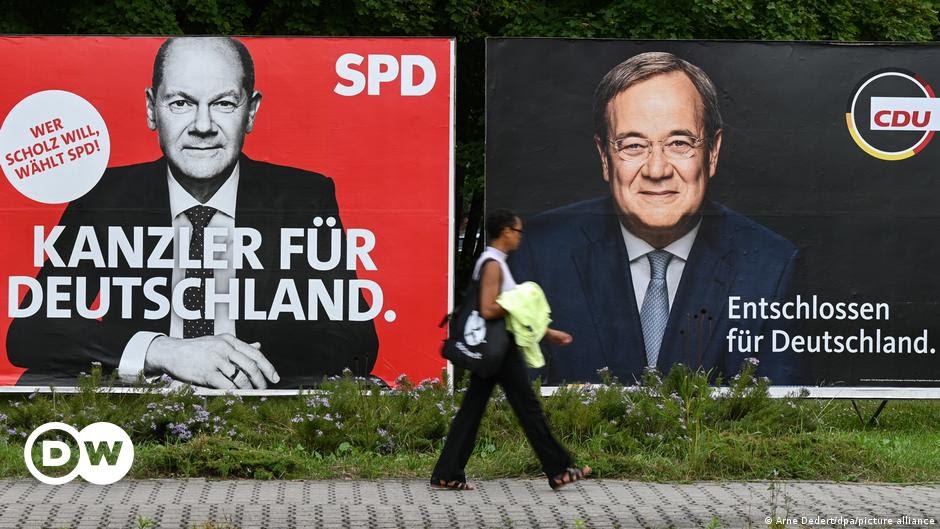 Germany’s center-left Social Democrats (SPD) won the biggest share of the vote in Sunday election, narrowly beating outgoing Chancellor Angela Merkel’s conservative Union bloc (CDU/CSU) in a closely fought race that will determine who succeeds the long-time leader at the helm of Europe’s biggest economy.
With all 299 of Germany’s electoral districts reporting, the SPD won 25.7% of the vote, beating out the Christian Democratic Union (CDU), the centrist-right, conservative party of outgoing Chancellor Angela Merkel, which posted record losses by taking 24.1%, according to the Federal Returning Officer.

However, there is still uncertainty over who will be the next leader of Germany. Both the SPD and the CDU with its coalition partner, the Christian Social Union (CSU), have said they want to begin coalition negotiations to form a new government.

The tight result means that two smaller parties — the Green Party, which took 14.8% of the votes, and the Free Democratic Party (FDP), with 11.5% — will be the likely kingmakers.

KKE: No positive change in favor of the people

In a statement issued today (here in Greek) the Press Bureau of the CC of the Communist Party of Greece (KKE) points out:

“The election result in Germany does not foreshadow any change in favor of the German people, the Greek people and the other peoples of Europe, as the EU parties in Greece claim. On the contrary, it signals the intensification of the anti-people policy in the “locomotive” of the EU and Eurozone, under the mantle of “green transition”, that the workers will be called to pay in various ways. Ater all, the German Social Democratic Party (SPD), which is likely to be the backbone of the new government, has a long tradition in the implementation of anti-worker and anti-people policies. The fact that “everyone can go with everyone” in order to form a government says it all.

This common strategy of them gives everything to the business groups, in order to shield German capital in its fierce competitions with the U.S, China and Russia.

Those who cultivate false expectations for a “pro-people change of the EU” or for a “positive development for the Greek people” will be very soon searching for a chair… to fall from”.