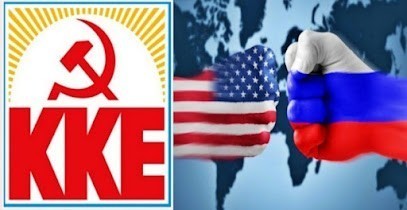 Following the dangerous escalation in the relations between the Euro-Atlantic forces and Russia on the issue of Ukraine and Eastern Europe, the Press Office of the CC of the Communist Party of Greece (KKE) issued a statement calling for Greece’s disengagement from the dangerous US-NATO military plans.

“The ineffective meeting of the US and Russian Foreign Ministers in Geneva, their inability to reach and agreement even on the subject of the talks, has been accompanied in the last 24 hours by tension in aggressive rhetoric and military moves by the US, NATO and EU towards capitalist Russia. The confrontation in Ukraine, which in recent years has been consistently at the center of intra-imperialist competitions, is once again rekindling.

The inability of the bourgeois classes of the countries involved to find even temporary compromises has led to a complete deregulation of the so-called “Minsk Agreements” – which anyway were characterized by the so-called “diplomatic ambiguity – as well as to the resurgence of plans for military “solutions” in Ukraine.

US and NATO forces are “tightening” the “noose” around the Russian Federation, from the Baltic to the Black Sea. The New Democracy (ND) government, with the support of SYRIZA and KINAL, has pushed our country into these dangerous plans, by participating with armed forces in military operations abroad, sowing new U.S. bases  and enlarging the old ones. Especially the U.S. military base in Alexandroupolis, which was launched by the previous SYRIZA government and expanded by the current government of ND, is used as a center for the promotion of U.S military forces towards Eastern Europe. In this way it targets the country amd exposes our people to great dangers, as a result of the intensification of intra-imperialist competitions.

– The disengagement of the country from imperialist plans, no participation in NATO military exercises , in the encirclement of Russia.

– No ratification of the new Greek-American agreement and any agreement that binds the people and the country to the dangerous imperialist plans.

– Immediate closure of the US-NATO bases of death.

We call the people to intensify the struggle for disengagement from the imperialist unions of NATO and EU, with the people being masters their own homeland.”

The New Dangerous Class? The PMC and Virtue Hoarding

Assange ruling a dangerous precedent for journalists and British justice

Dangerous Precedents and Hypothetical Threats: The Deportation of Novak Djokovic