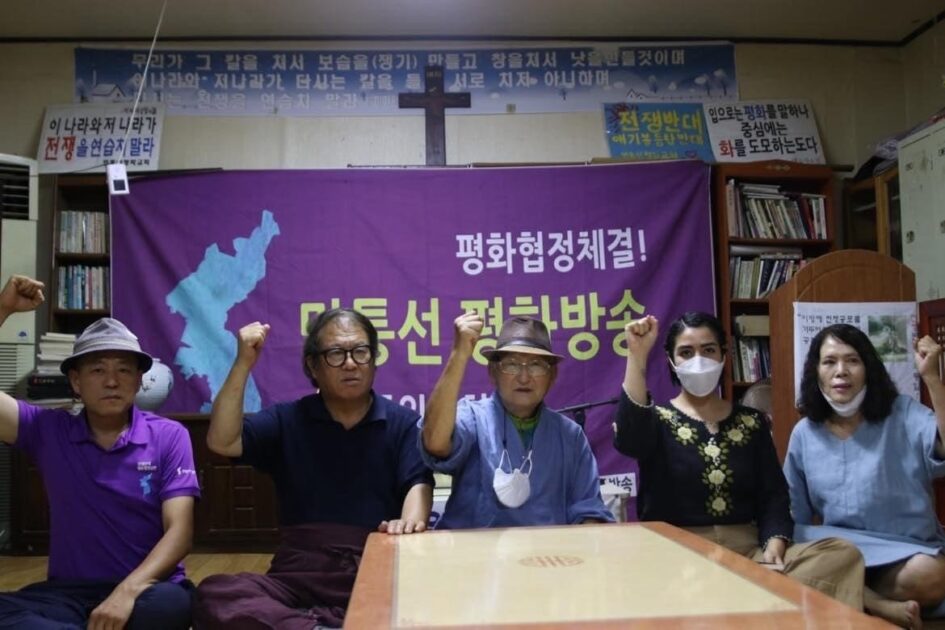 Earlier this fall, PSL member Claudia Andrade visited South Korea as a delegate to the People’s Democracy Party. While there, she engaged in discussions and actions with the PDP and other organizations fighting for an independent democracy and against U.S. imperialism.

Photo: Claudia Andrade with Rev. Lee’s Peace Church in the civilian control zone of the DMZ

My time with the People’s Democracy Party took place in the lead up to the general strike in October organized by leading labor organizations. Among their demands were a living wage, improved social services, and an end to unfair non-contract work.

Among the many obstacles that workers face, political repression under the pretext of COVID-19 policy was used against labor organizers. For example, leader of the Korean Confederation of Trade Unions Yang Kyung-Soo was arrested on September 2 for allegedly violating COVID-19 restrictions by holding political rallies with more than one person. In a democracy workers must have the right to express their grievances, but in the case of South Korea this right is continuously curtailed — in this case under the guise of health policies that do not actually protect the population from the pandemic.

Additionally, South Korean workers and progressive organizations are censored by the National Security Law, which criminalizes any form of political speech that calls for systemic change. A remnant from the Japanese colonialization of Korea, the NSL is an anti-communist law which is frequently used to repress the left and labor movement to this day.

Holding back the workers’ demands for systemic change is the U.S. occupation of Korea. The United States has around 30,000 troops in Korea at all times. Under the thumb of an occupying army, South Korea’s sovereignty is violated. The unofficial chain of command is Washington, then the U.S. Embassy in Seoul, then finally the Blue House (the South Korean white house). The United States controls the South Korean military and has absolute authority over inter-Korea relations. This is the result of the Korean War which was never ended through a peace treaty and gives a pretext for U.S. presence in the peninsula. For a peaceful reunification and a workers’ democracy, the United States must leave Korea.

A narrative of international solidarity

What I witnessed was the struggle workers are taking up for a just and democratic society in Korea. In my many conversations with union organizers, students, farmers, and activists, there was one common thread: the fight against U.S. imperialism. This is one of the guiding principles of the PDP, which officially formed on November 05, 2016. They were the first progressive party to openly launch after former President Park Geun-hye’s brutal crackdown on progressive politics, which included the arrest of leaders of the former Unified Progressive Party.

The PDP has deep roots in the Korean liberation struggle and the world progressive movement, and they continue to recruit and train new committed activists and relentlessly struggle for justice on every front. The PDP fights for the independent and peaceful reunification of Korea.

I began my trip by visiting the Peace Church located in the Demilitarized Zone (DMZ).  Near the border dividing Korea, I met former political prisoner Ahn Hak-Sop and peace partisan Reverend Lee. One of the longest serving political prisoners, Ahn told me his life story and the horrific torture he endured for 43 years under South Korean and U.S. forces. Rev. Lee is a peace activist and poet who served prison time for a protest in which he set fire to the Douglas MacArther statue in Incheon. Similar to Confederate statues, the MacArther monument honored a U.S. general and notorious racist who led the initial occupation of Korea during the Korean War.

Reverend Lee and Mr. Ahn spoke of Korea’s history, its colonization and occupation. They stressed the role of U.S. imperialism and how they struggle against it for the liberation of Korea. Mr. Ahn stated that even in death, he would still fight for liberation. Both Mr. Ahn and Rev. Lee are close allies of the PDP.

Then, I visited the Pyeongtaek U.S. military base, which is the largest military base in Korea and the largest U.S. military base abroad. Pyeongtaek is about the size of Washington D.C. It was first established after World War II and has expanded significantly over the years. With each expansion, more and more Koreans — primarily farmers — have been displaced. The area surrounding the base is rich farmland and is polluted by runoff from the base. Women face harassment and sexual assault from soldiers.

In addition to all the indignities the bases present, South Koreans have to foot the bill. For example, the city of Pyeongtaek constructed a sewage treatment plant just to filter the waste produced by the U.S. base. Korean taxpayer money is used to subsidize occupation. These are some of the ways U.S. imperialism affects everyday life.

I also spoke in front of the U.S. Embassy. There were different right-wing forces present and a heavy police presence kept the progressives and the reactionaries apart. Despite the repression, I spoke along with other peace activists and called for an end to U.S. occupation. The U.S. embassy is a stone’s throw away from the Blue House. I could only imagine the countless commands directed from one building to the other. The right wing blared their “patriotic” and anti-communist music from their speaker trucks, but the anti-war rally carried on undeterred.

A few blocks from the U.S. embassy stands the Japanese Embassy. In front of the embassy, the People’s Democracy Party occupies the sidewalk and holds a constant vigil of the ‘girl statue’ which memorializes the victims of sexual slavery at the hands of Japanese imperialism. Members of the PDP have stood with the statue for over 2,000 days in around the clock occupation.

During World War II, thousands of women from Korea and several other Asian countries were forced into sexual slavery by the Imperial Japanese Army. Due to stigma many of these women remained silent until the 1980s when victims began to speak up against the abuse they had faced. Although there is an international movement for justice, the Japanese government refuses to apologize for the systemic kidnapping and sex trafficking of these women. Furthermore, since the end of Japanese colonization the Japanese government has refused to acknowledge the injustice. Activists holding down the occupation tent spoke of the demands that the international movement for these women have put forth. They include reparations, acknowledgement, and the recording of this tragic history in textbooks.

While in South Korea, I was fortunate to speak with several different groups of workers ranging from striking steel workers, farmers, education officials and students. In our meetings we spoke of deteriorating U.S. conditions workers are suffering from and how this relates to U.S. imperialism and the occupation of Korea. Workers in South Korea often do not know the full scope of poverty in the United States. Many workers were shocked to hear how pervasive poverty is and the chronic state of underdevelopment in many parts of the country.

On my last day in Korea, I visited the picket line of Hyundai steel workers striking against unfair non-contracted work. In Korea workers are divided into ‘regular’ and ‘irregular’ employees. Only regular workers receive contracts and benefits. Although irregular workers perform the same job, they are paid less and have no job security. Companies are increasingly relying on irregular workers while slashing pay and benefits. At the time of my visit 700 workers were occupying a building in the Hyundai steel plant. I joined a picket line and gave a solidarity statement to the workers inside. Their banners hung down the side of an industrial building.

Hyundai steel is one of the major conglomerates known as Chaebols which dominate the Korean economy. These Cheabols started as pro-Japanese collaborators during the colonization of Korea who benefited from the brutal exploitation of the Korean people. Today they hoard a majority of the wealth in the country and are pro-U.S. collaborators.

Although my time in South Korea this time around was brief, I left with the invaluable spirit of international solidarity and commitment to struggle. While as socialists in the United States we are fighting against war, poverty, and racism, our fight is connected to the fight against U.S. imperialism in Korea. Our comrades in Korea consistently demonstrate their principled solidarity for the people’s struggles in the United States. For example, they raised consciousness inside and outside of Korea when anti-racist protest leaders were arrested for their role in the struggle in Denver. I remember the words of the union members in Yesan, that there is power in organization and that they will keep fighting in the struggle.