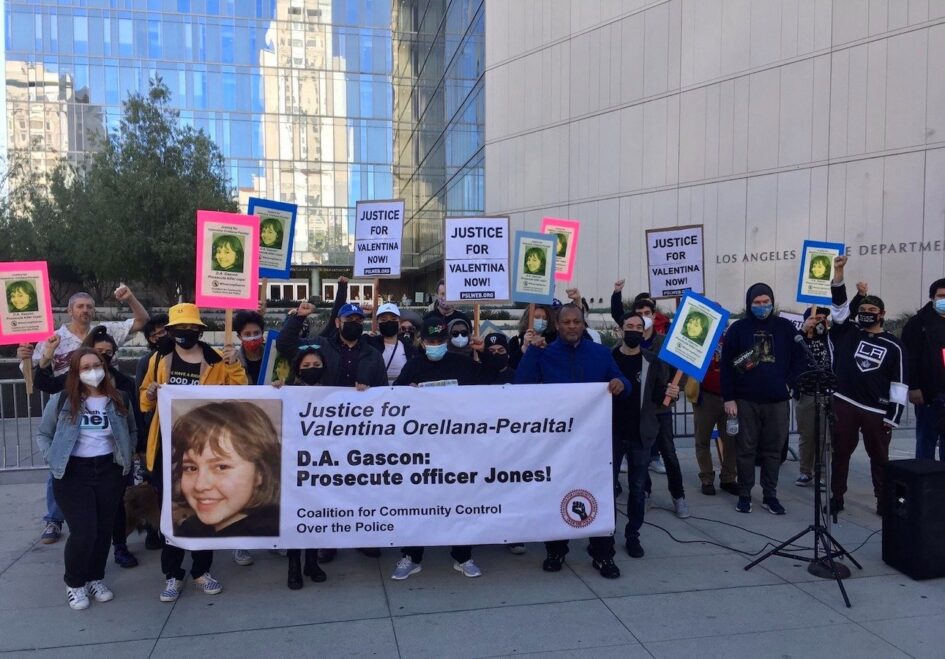 On Jan 2., brought together by outrage and the necessity for action, a press conference was organized by the Coalition for Community Control over the Police, Project Islamic H.O.P.E, Party for Socialism and Liberation and other community activists in front of the Los Angeles Police Department Headquarters in Downtown Los Angeles.

On December 23, LAPD officers shot and killed both Valentina Orellana-Peralta and Daniel Elena Lopez at a Burlington Coat Factory in North Hollywood after officers recklessly charged in with military assault rifles while responding to reports of an assault. Released bodycam footage shows that the police were able to reach the suspect Lopez, and quickly create space between them and him. Yet, Officer William Jones Jr., in defiance of even his own fellow officers, did not “slow down” but instead decided to recklessly fire his assault rifle into Lopez, killing him. A stray bullet went through an adjoining wall to the dressing room and fatally struck Orellana-Peralta, who was with her mother trying on dresses for her upcoming quinceañera.

Orellana-Peralta died in her mother’s arms.

Najee Ali, of Project Islamic H.O.P.E., set the main focus of the conference by speaking first, by repeating Orellana-Peralta’s father’s demand for the arrest and prosecution of all the “criminals responsible for his daughters death,” and “for (Jones) to be arrested, prosecuted and brought to justice.” Cliff Smith, of CCCOP, described the goal for the event saying, “it’s not just Valentina that we are here for, the police have killed five people in the last two weeks,” highlighting the real trend in police killings over 2021 amidst rising poverty and inequality.

Local community activist, Edin Enamorado, included in his statement that Los Angeles District Attorney, George Gascon had “promised him while on the campaign trail that he would prosecute killer cops, in contrast to (his then rival, D.A.) Jackie Lacey.” Enamorado then described Gascon as a “typical Democrat” pointing to Gascon’s lack of action to police killings in Los Angeles. He also mentioned the tragedy of Lopez’s killling, saying that “in the U.S…. we focus more on punishment instead of healing. [Lopez] should have seen his day in court just like everyone else. [Instead] they executed him.” Echoing these sentiments, Keyanna Celina, organizer with CCCOP, delivered a passionate statement highlighting that Orellana-Peralta and Lopez’s murders are not isolated events, rather a pattern of LAPD officers killing with impunity. Celina enumerated the names of multiple victims like AJ Weber, whose father was in the audience.

Celina went on to explain how “the death of Black and Brown youth is normal in LA County and sets the blueprint for how policing is down nationwide” and if “Lacey (and Gascon) had a backbone, they would have charged the officers.” The press conference then closed with a welcomed surprise that Orellana-Peralta’s family was watching a livestream of the event and appreciated the support. In closing, Smith reiterated that they “were not with Gascon, they stand with the family of Valentina and all countless others victims, the community and the people.”

Across town later that day, a vigil and demonstration was organized by People’s Struggle – SFV, at the site of the shooting. Those in attendance rallied passersby and motorists and held up signs while more and more people joined as time went on as chants of “How do you spell murderer? LAPD!” and “Que queremos, justicia popular (What do we want? People’s Justice!)” filled the intersection of Victory and Laurel Canyon.

Members of Lopez’s family were amongst those in attendance and shared their memories of their brother and extended condolences to Orellana-Peralta’s family. They also described a side of Lopez, who they lovingly called Danny. Lopez’s sister, Crystal, described Lopez as “such a funny guy, who loved his family… he had so much to live for, so young.” At just 25 years old, Crystal explained that “(his upcoming birthday) would be the first birthday in three years he wasn’t incarcerated.” Speaking through tears, she went on to share her thoughts on his last moments saying, “When his crisis happened, he was hungry, cold and felt alone. He had no pants on and they took his life. The police are here to protect and serve the community but instead they think they have license to kill… my brother was full of love and joy.” Lopez’s mother spoke proudly of her son’s “love of his family and willingness to help whoever needed help…” She added that the police her son, whom she called the love of her soul. Lopez is survived by a 1-year old daughter.

Valentina Orellana-Peralta ¡presente!14-year-old Valentina was shot to death by the Los Angeles…