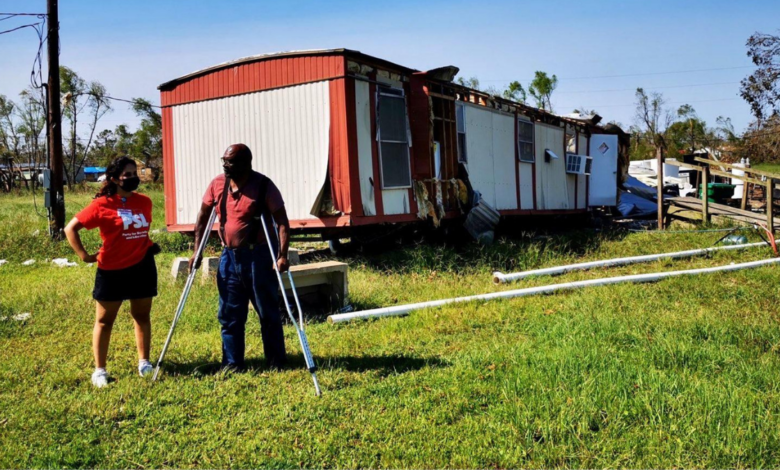 On the weekend of September 11, organizers from the Party for Socialism and Liberation in the Central Gulf Coast region made a second trip to LaPlace, Louisiana, to distribute relief aid and document the government’s shameful response after Hurricane Ida.

Residents reported that Ida hit them harder than the infamously destructive Katrina because of much greater wind damage.

Even though Ida made landfall over three weeks ago, residents of LaPlace are still without electricity—which has been out since August 29—a problem that can be deadly when paired with Louisiana’s blazing summer heat. Residents report that they are only expecting to have power restored on September 29—a full month after it was knocked out.

When speaking about electricity, residents overwhelmingly point to an underfunded—and even outdated—infrastructure.

Speaking to Liberation, LaPlace resident Raymond Kirklin said about the infrastructure, “We’ve got to upgrade, we’re behind about 50-60 years, you can just look at it, all the wooden poles are leaning, everything’s leaning, all the metal poles [aren’t] … Everything needs an upgrade.”

Another LaPlace resident, a career electrician, added, “We wouldn’t be without electricity right now if 50 percent of the poles weren’t snapped in half. You can’t snap a new pole, those poles are made to take the winds. If they can’t take those winds, it’s because they’re old. And I have to put that on the Parish President [Jaclyn Hotard], she should be pressing [Energy companies] to keep things updated.”

Another critical piece of infrastructure that residents of LaPlace are demanding is the levee system—which is intended to keep rising water out of potential flood zones. LaPlace residents were only promised a fully funded levee system in 2018—after Hurricane Isaac led to unseen levels of flooding—but the project is only set to be completed in 2024. The people of LaPlace cannot wait that long.

During Hurricane Katrina, 35% of Louisiana’s National Guard—who are usually the first on the line during hurricane rescue—had already been sent to Iraq to fight Bush’s war, unable to help with rescue efforts. Along with this, 80% of the funding toward the upkeep and construction of the New Orleans levee system was actually redirected to the war in Iraq—weakening the structural integrity of the levee system that ultimately burst.

When one looks at Louisiana’s previous handling of levee systems, it becomes clear that people’s needs don’t take priority. With a fully funded infrastructure upgrading program, the flooding in LaPlace could have been prevented.

When organizers spoke to LaPlace residents about the Afghanistan War spending—in which $2 trillion was wasted by the U.S. government on a senseless war that caused nothing but death and destruction—almost all of the residents seemed to have the same question: Why is the money spent on war before protecting people at home?

Another common theme heard from residents of LaPlace is that FEMA has done next to nothing to help. Those who have filed FEMA claims haven’t heard back or have been outright denied. LaPlace resident Shynell Williams reported that when she had attempted to file a claim to FEMA, she was on the phone for nearly 560 minutes (9 ½ hours).

Williams went on to add, “It doesn’t matter how much insurance you have, it looks like the insurance still finds a way to shortchange you on the damages that you have to pay.” Almost all residents report the same lack of response both from government agencies such as FEMA and private insurance companies profiteering by denying claim after claim.

Organizers say the federal government must provide full federal aid for the people impacted by Hurricane Ida, and FEMA must provide immediate relief—there is no time to waste.

Whether it is increasingly devastating storms fueled by climate change, lack of infrastructural defense against these storms or immediate relief after the storms make landfall—all the problems that the people of Louisiana are facing boil down to the capitalist system that prioritizes profit over human life.

The people’s demands for the federal government are as follows: