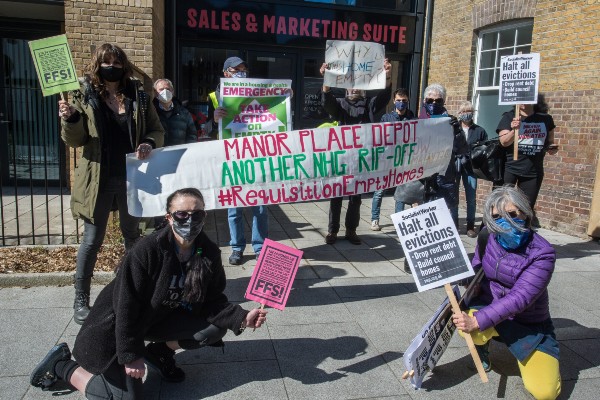 A protest to demand action on empty homes in London (Pic: Guy Smallman)

A Labour-run council in east London has forced hundreds of residents to move more than 100 miles away—or face homelessness.

Waltham Forest council gave to the choice to at least 214 households since 1 June 2019 under the Tory government’s homlessness duty.

Councils in England have a duty to house homeless people until they can find them permanent residence.

In July 2019 Waltham Forest council began working with “relocation experts” Reloc8 UK to get rid of its poorest residents.

The borough has a 10,000-long waiting list for council homes and private rents and spent £25.4 million on temporary accommodation in 2020.

Reloc8 UK has a solution to this problem—providing permanent homes in cheaper cities.

Homeless households who refuse a Reloc8 home are deemed to be “intentionally homeless” and forced out of their temporary accommodation. This happens even if the household has never been to the city they’re offered.

Homelessness guidance says residents should stay in their local area unless in exceptional circumstances.

But one resident of Waltham Forest, single parent Nadia, was offered a maisonette in Stoke-on-Trent in July.

The council made the offer on a Wednesday—and she had to decide if she would relocate by the Friday. In an email, it told her, “Please note that this offer of suitable private sector accommodation will discharge our duty to you whether you accept or refuse the property.

“You will only receive this offer of suitable accommodation.

“The offer of accommodation cannot be held open for you for more than 24 hours and the council will assume that you have refused the accommodation offered if you fail to attend.”

Nadia told the Waltham Forest Echo newspaper, “I don’t know where Stoke-on-Trent is. I have got my family and friends here and my children’s’ schools—it’s heart-breaking.

“Whoever decided this, it’s a very shameful act. At the end of the day, they have decided to chuck me out of London.”

The Tories’ benefit cap limits Nadia to £442.31 a week as a single parent in London. She is currently living in Walthamstow, paid for by the social services, but faces eviction before the end of October.

Nadia’s is one of 214 households old to move into Reloc8 homes at the start of this month.

Some 94 agreed and the remaining 120 refused.

Nadia’s family were one of 162 told they would be moved to Stoke-on-Trent. Thirty-two households were asked to move to other locations more than 100 miles away with a further 20 to move more than 200 miles.

Nine other London councils also use Reloc8. Seven had only moved less than twenty households. The remaining two— Hillingdon and Ealing in west London—had moved 74 and 60.

The furthest move offered was to a property in Newcastle-Upon-Tyne by Tory-run Barnet council in north London.

Rising property costs mean that many local authorities buy properties in other cities or boroughs to discharge their duty and send residents away. This process is sometimes known as “decanting.”

Seven London councils had spent more than £80 million on property in other London boroughs, Kent, Oxfordshire and Hertfordshire.

And it’s not just London councils. Local authorities across England are securing accommodation for residents in Wales, Scotland and Northern Ireland.

Local authorities are supposed to notify the council in charge of where homeless people are being placed so that support can be put in place. But at least 60 councils failed to comply with this legal duty.

The solution is a massive programme of council house building and for councils to requisition empty homes.