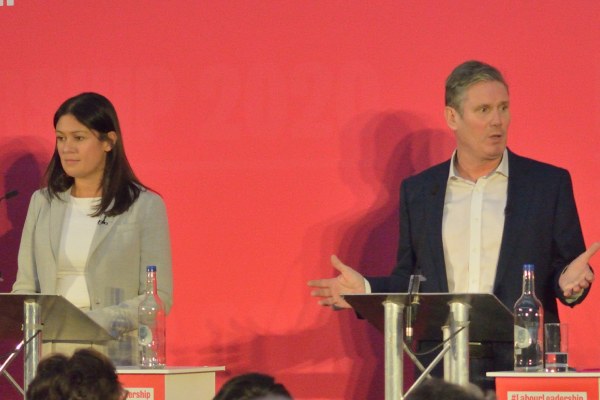 Labour’s members and its party leadership are pulling in two different directions on questions of war, imperialism and rights for Palestinians.

Delegates at the party’s conference on Monday passed a motion demanding sanctions on Israel—which party leader Keir Starmer was apparently ready to “rebuke.” There was also strong support for a motion condemning warmongering against China.

Meanwhile, shadow ministers Lisa Nandy and John Healey talked up support for the military and intervention.

The conference passed overwhelmingly a motion calling for sanctions against Israel, boycotts of settlement goods—and accusing it of apartheid. There was a big cheer when the motion passed by a show of hands.

Introducing the motion, Jawad Khan from Young Labour said the motion would “oppose apartheid in Israel.” He also accused Israel of “settler colonialism,” and said sanctions and boycotts would be “one step closer to ending the shameful history of Britain’s complicity” in Palestinian oppression.

Lesley Cook from Wolverhampton South West, who supported the motion, said, “We must address the reality recognised by our TUC colleagues in 2020 and 2021, affirmed by Human Rights Watch and B’Tselem this year.

“Israel is practising the crime of apartheid.”

It was a strong note of defiance in the face of attempts to silence criticism of Israel among Labour Party members. It came despite the party machine’s attempts to keep a lid on the debate.

Before the conference even began on Monday, unnamed “sources” briefed the press that Starmer and Nandy would “rebuke” delegates if they passed the motion.

They told the Jewish News website—part of Times of Israel—“Both Keir and Lisa have got little time for these motions on Israel and Palestine.

“They are adamant they don’t represent that policy of the party, and as such, are not acceptable.

“But both Keir and Lisa are ready to issue a rebuke of the motion as it stands, and of those behind it.”

Conference chair Angela Eagle MP told members not to wave flags—desperate to avoid a repeat of the 2018 conference when delegates filled the hall with Palestinian flags.

And Labour MP Steve McCabe said the motion was “too shouty, too angry and one-sided.” He worried it would damage a Labour government’s relationship with Israel.

Meanwhile, Nandy and Healey used their speeches to revive the myths of “humanitarian intervention” and “muscular liberalism” used the justify the wars in Iraq and Afghanistan.

Nandy, the shadow foreign secretary gave the “liberal” side. She said Labour’s foreign policy would “put people at its heart, defend our national security, protect our planet, uphold human rights.”

It was left to shadow defence secretary Healey to provide the muscle. He praised the army and criticised the Tories for cutting military spending. And he said Labour would use its support for the Nato military alliance to increase Britain’s power as an ally of the US.

He quoted Keir Starmer, “Never again will Labour go into an election not being trusted on national security.” And he added, “It was Labour that established Nato and the nuclear deterrent.

“With Labour and Keir Starmer, the country will get the leadership to forge a new and powerful role for Britain in the world.

“We will insist on the UK’s say with the US as our most essential ally, stepping up Britain’s leadership in Nato.”

The difference between Labour members and its leading politicians could hardly be more stark.

Under Starmer, Labour has no intention of challenging Israel or breaking from US wars—and he won’t let motions change that.