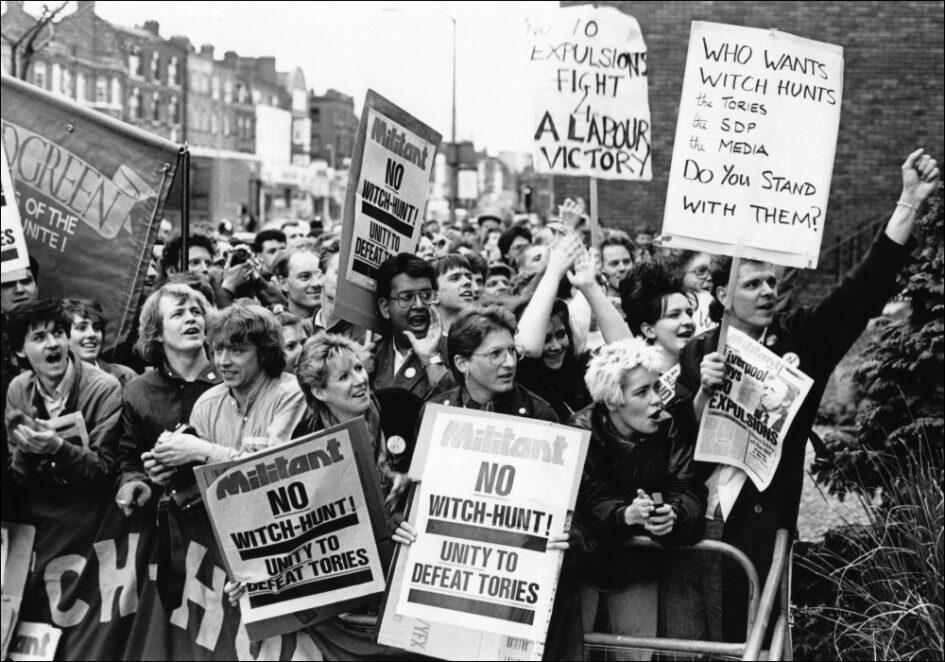 Lobby of the Labour Party NEC in support of the socialist Liverpool councillors, photo Dave Sinclair   (Click to enlarge)

The news that Labour’s national executive committee (NEC) has proscribed, aka expelled, a number of left-leaning groups that have clung desperately onto the Labour Party comes as little surprise.

Since the resignation of Corbyn, and under Starmer’s leadership, every action by the Labour bureaucracy has been in the direction of destroying any remnants of Corbyn’s leadership and strengthening the right wing’s control. These expulsions follow the suspension from the party of Corbyn himself, one of the Unite representatives on the NEC, Howard Beckett, and hundreds of ordinary members on trumped-up charges.

Working-class people have seen the cuts carried out by Labour locally over the course of the last ten years, including during the period of Corbyn’s leadership. For many of those who remember the Blair years, Labour is still the party of illegal wars, privatisation and selling out.

Supporters of Militant, the Socialist Party’s predecessor, were expelled from the Labour Party by the right wing in the 1980s and early 1990s. We explained back then that this would be the thin end of the wedge, and that a purging of socialist ideas would follow close behind.

Unfortunately, we were proved correct as Blairism established a stranglehold on the Labour Party. It was not only socialists and socialist ideology which were expelled, even the idea of defending the living standards of the working class was trashed. With the transformation of Labour into New Labour, it was clear that the task for socialists then was to fight for socialist ideas and a new mass party of the working class.

The expulsion of Militant supporters came against the backdrop of a massive struggle, with Militant winning huge support for socialist ideas amongst workers and youth inside the Labour Party, and an important influence in the general class struggle of the time. Unlike the recent quick and simple NEC vote to expel left groups from the party, the expulsion of Militant – from the members of the Militant Editorial Board in 1983 to the Militant MPs Dave Nellist and Terry Fields in 1991 – took place following an almighty battle over many years.

That fact that Starmer and his cronies have been able to act so freely and confidently now reflects the dire weakness of the ‘left’ that remains in the Labour Party. A few tweets and comments from a small minority of Labour Campaign Group MPs, and a small protest outside Labour’s HQ, were the only opposition Starmer faced.

Many will actually be surprised that there are still ‘left’ groups clinging to Starmer’s Labour. It has to be said that, despite their opposition to Starmer and austerity in general, most of the groups banned have campaigned and supported service-cutting councillors and right-wing anti-Corbyn MPs throughout the last period. But their proscription, reintroducing a procedure abolished in the 1970s and establishing a panel to examine other groups, will now make it easier to move more extensively.

These moves by the right to consolidate their grip are yet another illustration of the need for the workers’ movement to create its own political voice, representing the interests not of the spivs and speculators but of the working-class majority. We would argue for such a party to put forward a clear socialist programme – based on the nationalisation of the major corporations and banks – so that all their resources could be harnessed to meet need rather than being squandered on the profits of a few. Then decisions on housing, transport, and every aspect of our lives could be decided democratically, rather than behind closed doors by the bosses and the politicians who represent them.

The RMT (who themselves were expelled from Labour in 2004) should approach all unions – affiliated and non-affiliated to Labour – to call a conference that would be open to the Labour left and socialist organisations like the Socialist Party and those who work with us in the Trade Unionist and Socialist Coalition, to discuss how to organise a political force that can best represent workers and stand up to the stark Covid economic and health consequences for workers.

London floods: Privatisation and heavy rain are a dangerous mix

Jobs and homes for all

Cuban protests – what do they represent?

In brief: News, reports & analysis from the CWI